Davis has named his company the RJD Group Inc.

Davis was elected as state party chairman in 2004. 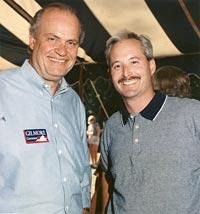 ... In 1988, Bob served as President George Herbert Walker Bush’s 3rd Congressional District Coordinator in Mississippi where he helped Bush capture the state in the presidential election.

From 1989 to 1994, Bob served as Political Director at the State Republican Party and played a key role in the statewide Republican sweep in the 1994 election. He has consulted with hundreds of candidates across the state both for statewide and local office.

From 1994 to 2002, Bob served as Senator Fred Thompson’s top aide in Tennessee where he held the position of State Director. He also was the Campaign Manager for Senator Thompson’s successful re-election campaign in 1996 where Thompson captured more votes than any other candidate previously in Tennessee history.

In January of 2003, Bob was named Deputy Chairman of the Tennessee Republican Party, Bob played an integral role in helping Republicans gain majority status in the state senate for the first time in 140 years. ...

On December 11, 2004, the State Executive Committee unanimously elected Bob Chairman of the Tennessee Republican Party and on January 19, 2005, Bob was appointed to the Republican National Committee in Washington, D.C. In December 2006, Bob was unanimously reelected Chairman. ...

http://www.rjdgroup.net/about-us/davis.php
Posted by Alex Constantine at 10:27 AM