Hugo Chavez is a socialist, opposed to the corporate state, but the "reporters" at MediaBistro.Com are comparing him to the capitalist dictator who coined and defined the word "fascism": "Venezuelan sabre rattling: Venezuela's aspiring Mussolini-in-training Hugo Chavez is preparing for his own, down-home invasion of Ethiopia by deploying troops to the Colombian border. Chavez's justification? The murder of a Colombian rebel leader on Ecuadorean soil. Ecuador has also ordered troops to Colombia's border, withdrawn their ambassador from Colombia and expelled Colombia's ambassador to the country."
http://www.mediabistro.com/fishbowlny/the_crystal_ball/the_crystal_ball_colombia_invasion_cia_mystery_jails_journos_being_shot_at_in_crawford_78848.asp 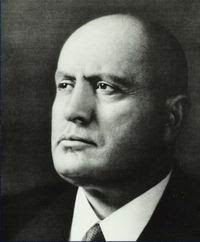 That's quite an insult to Chavez, this comparison to Mussolini, who tortured socialists like Chavez, spied on and propagandized his people, waged illicit wars, much like Presidenté W. El Sinestro-Satano in Gringo-Norté. MediaBistro.Com in liberal - ah, "far-left" Hollywood - hates Hugo Chavez. How to account for THAT? ...

Anyways, drop the CIA spin, and it turns out that Chavez is not the aggressor in this conflict:

"Venezuela started shutting crossing points on the 1,400-mile border to try to isolate its neighbour after Bogotá made a series of extraordinary allegations about the Venezuelan leader funding Marxist guerrillas intent on building A URANIUM-ENRICHED 'DIRTY' BOMB."

Dirty bomb? Chavez? Who wrote the script for this one? G. Diablo W. "Dumbo" Luciferius? Here's another ludicrous accusation that the state propagandists at MediaBistro.com need to pick up on:

The little Benitos at the CIA's MediaBeastRow.com can score a significant propaganda victory with that one - "genocide." Like the mass murders committed by, oh, I don't know, say, the CIA. If the essence of Mr. Mussolini is to be found anywhere, it's in Langley, home of the Jackals, not Venezuela. Most of the liberals, um, "far-leftists," in Hollywood already know that. Laurel Touby should send out one of her useful idiots to talk to one of them.