Jan. 14: " ... After Lehman Brothers Holdings Inc. declared bankruptcy in September, the credit markets froze when investors refused to buy any but the safest Treasury securities. Issuers canceled billions of dollars of bond sales. In December, the Port Authority of New York and New Jersey failed to get any bids for a $300 million taxable note offering. ... " 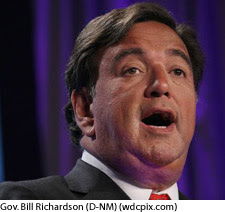 " ... An antitrust lawyer involved in the investigation, Michael D. Hausfeld, told the press the bond market is “one of the longest-running, most economically pervasive antitrust conspiracies ever to be uncovered in the U.S.' ... Here are just a few familiar names, among the 30 financial companies that have been subpoenaed: American International Group (AIG), JP Morgan, and Merrill Lynch. They all have received federal bailout money. ... ”

It looks like the bad news is not over yet, as the FBI closes in on a three-year investigation of the municipal bond industry. This investigation prompted New Mexico Gov. Bill Richardson to withdraw from his nomination as Commerce Secretary while a probe into his major financial PAC contributor obtaining an inside track to a state project was announced.

His explanation was he didn't want a long confirmation battle, and added that he and his aides did nothing wrong. He also told the press he didn't want to be a distraction for President-elect Obama.

A collection of federal agencies, and a group of state attorneys general, have gathered evidence, according to the New York Times, of what appears to be collusion among banks and companies that helped state and local governments take about $400 billion in municipal notes and bonds to market each year. ...

An antitrust lawyer involved in the investigation, Michael D. Hausfeld, told the press the bond market is “one of the longest-running, most economically pervasive antitrust conspiracies ever to be uncovered in the U.S.”

On one hand, it's great that this corruption is being uncovered. The bad news is the timing for Obama, who is pushing for a big fiscal stimulus package that involves infrastructure projects built and financed at the state and local level.

In order to raise money for schools or road construction, states and cities issue bonds and are supposed to follow strict rules on how investors receive a tax exemption on the interest.

No one knows how long this investigation will go on, and what its final impact will be. The industry is lightly regulated, with rules set by the Municipal Securities Board. But there are no rules for a new type of professional who appeared in the industry 10 years ago -- the specialists who work with financial derivatives, like swaps and options.

These professionals have caught the eye of the IRS, which is concerned that the rules for tax-exempt bonds are being ignored. The retired IRS manager, Anderson, has told the justice department there was price-fixing and bid-rigging on a major scale.

Here are just a few familiar names, among the 30 financial companies that have been subpoenaed: American International Group (AIG), JP Morgan, and Merrill Lynch. They all have received federal bailout money.

Two of the firms that were recently raided by the FBI had already attracted unwanted attention over illegal campaign contributions: Investment Management Advisory Group, known as Image, of Pottstown, Pa., and Sound Capital Management of Eden Prairie, Minn.

These financial firms have been sued by the cities of Chicago, Baltimore, Md., Oakland and Fresno, Calif., the state of Mississippi, a number of counties, school districts and at least one water district.

A former treasurer of the city of Philadelphia now languishes in jail for accepting illegal payments in exchange for giving city bond business to selected companies.

Why weren't there rules for these so-called “professionals” that worked in such a critical part of the bond industry? Does this sound kinda familiar to you? Like Wall Street banks, no one watched the fox in the henhouse.

This may be a year for further revelations on corruption in America. How can Americans have confidence in an economy that keeps getting rocked with stories of corruption? Now we're told that $400 billion of taxpayers money has just vanished.

It took a long time for this system to become so entrenched. In every case, greed was the motivating factor. People make good wages in the bond industry, but it doesn't seem to be enough. Greed rules where there are no rules.

As It Stands, there's no doubt that Obama faces multi-challenges, and perhaps the most daunting will be to restore American's confidence after all these revelations.

Dave Stancliff is a columnist for the Times-Standard. He is a former newspaper editor and publisher. Comments can be sent to richstan1@suddenlink.net or davesblogcentral.com.