The US Media and the Attack on Gaza 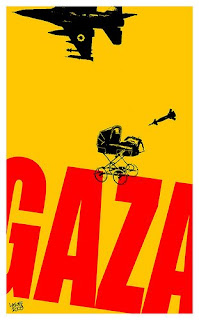 " ... Overall, the commentary presented a disturbingly false and misleading picture of the conflict to the American public. ... "

Download the full report [PDF] (Excerpt: "Rocket fire - The editorial and op-ed pages often cite Palestinian rockets fired at Israel as a justification for Israel’s bombardment of Gaza. The Washington Times editorial claims “Hamas responded to Israel’s unilateral pullout by firing more than 6,300 mortars and rockets into Israel ...” The Wall Street Journal editorial cites the exact same figures. However, none of the media outlets examined Israeli fire on Palestinians in Gaza. A 2007 Human Rights Watch report entitled “Indiscriminate Fire” documented that Israel has fired five to six times more missiles into occupied Gaza than the number of rockets Palestinian resistance groups launched into Israel: 'From September 2005 through May 2007... the [Israeli army] fired 14,617 artillery shells into Gaza compared to 2,700 fired into Israel by Palestinian armed groups.' ... ”)

In the first three days of the Israeli offensive from 28-30 December, editorials and op-eds from five major US papers overwhelmingly adopted the official US and Israeli government talking points on the conflict -- even where this version was clearly contradicted by the legal and historical record, widely available to the public.

The editorial pages erroneously put forward the view that Gaza was no longer occupied, ignored Israel's numerous cease fire violations, and blindly asserted Israel's right of self defense regardless of what was happening on the ground. Overall, the commentary presented a disturbingly false and misleading picture of the conflict to the American public.

The legal status of Gaza is repeatedly being misrepresented in the op-ed pages and the American mainstream media generally. While the international consensus position at the UN and among human rights organizations is that Gaza remains occupied even after the 2005 Israeli disengagement, the editorials and op-eds collectively refused to acknowledge this view. Instead, the editorial pages chose to adopt and promote the Israeli government view of a 2005 "complete withdrawal" from Gaza so that Israel no longer retains official responsibility there. The issue has important implications for determining accountability in the conflict, the humanitarian situation in the Strip, and even military operations that can be taken.

Most of the Israeli cease fire violations were ignored by the editorial pages. Within one week of the cease fire, the UN reported that Israel had violated it seven times. In fact, Israel announced very early into the ceasefire that it intended to fire "warning shots" at Palestinians who enter an area west of the Gaza Strip border fence, extending for several hundred meters -- preventing Palestinian farmers from accessing their lands. Palestinian fisherman off the coast of Gaza also faced almost daily harassment and assault from the Israeli navy. Furthermore, not a single editorial or op-ed mentioned the raid by Israel's army into Gaza on 4 November, which according to independent observers and human rights organizations effectively broke the ceasefire.

There was also no mention of reports which indicated that Hamas was interested in seeing the ceasefire continue.

The op-ed pages often cite Palestinian rockets fired at Israel as a justification for Israel's bombardment of Gaza. However, none of the media outlets examined Israeli fire on Palestinians in Gaza. A 2007 Human Rights Watch report entitled "Indiscriminate Fire" documented that Israel fired 14,617 artillery shells into Gaza compared to 2,700 fired into Israel.

Within three days of Israel's bombing offensive, almost all of the newspaper editorials examined proclaimed their support for Israel's right of self-defense.

The proclamation that Israel had a right of self-defense did not seem to have a relationship to what was actually happening on the ground in Gaza. Israel dropped at least 100 tons of bombs on one of the most densely packed areas in the world -- killing more than 200 Palestinians and injuring several hundred in the first day of the attacks on an already decimated society. The bombardment hit Palestinian schools, homes, mosques, private businesses, government buildings, apartment buildings and universities.

Writing in The Nation, United Nations Special Rapporteur Richard Falk explained that much of what was happening in Gaza could not credibly be called self-defense.
•••
Shervan Sardar is a Washington, DC-based lawyer. He holds a MA in International Affairs from American University and can be reached at ssardar_23 A T comcast D O T net.