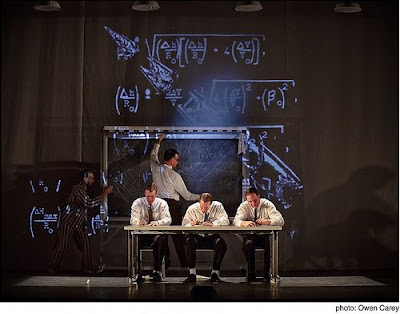 Well, after eight years, it's finally here: Apollo, Nancy Keystone's ambitious, three-part play about the Nazi scientists who started the US space program, the atrocities they committed in pursuit of the V-2 rocket, the man who eventually exposed them, and that other great struggle of the 60s, the civil-rights movement, opened Friday at Portland Center Stage. It's an epic work, both in length (nearly four hours) and scope, and, though I have a few gripes with the final portion of the show, it's a tremendously moving production. I hope tickets will sell briskly enough to allow PCS to bring us more of this sort of work in the future. My review will run here on Wednesday; in the meantime, here's a trailer.