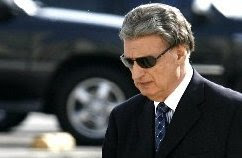 LAFAYETTE -- With the appearance of an emotionally beaten man, stripped of his silver hairpiece and his pride, Vince Marinello, the New Orleans broadcaster turned convicted murderer, was sentenced Thursday to spend the rest of his life in prison.

Shackled at the ankles, his wrists cuffed to a belt around his waist, Marinello, 71, shuffled into a courtroom about 11:25 a.m. to formally receive the punishment for killing his estranged wife, Liz Marinello, in 2006.

"Oh, man, look at that, " an audience member said softly as Marinello walked into the courtroom wearing an orange jumpsuit and rubber shower shoes without socks. "He looks like the devil."

Marinello hunched over the defense table throughout the 30-minute hearing, which was a formality because the mandatory sentence for a second-degree murder conviction is life behind bars. Unless his conviction is overturned, he will die in prison.

A Lafayette Parish jury found him guilty Dec. 13 of killing Liz Marinello, 45, who was shot in her face Aug. 31, 2006, as she emerged from a therapy session in Old Metairie. She died early the next day when doctors removed her from life support. About a week later, Marinello was booked in her death.

Marinello, who says he is innocent, offered no expressions of remorse or words of condolence to his former in-laws on Thursday. His attorney, Paul Fleming Jr., whose request for a new trial was denied Thursday, filed a notice of appeal immediately after the hearing.

Marinello declined to say anything in court, even after hearing statements from Liz Marinello's family and her ex-husband, who verbally lashed him from the witness stand.

"I hope that you will find the rest of your days on earth as empty and painful as you have made ours without Liz, " Claudia LaBue, Liz Marinello's younger sister, told him.

The family and friends who packed the courtroom left disappointed, saying they had hoped Marinello would speak.

"We figured he would speak, " LaBue said outside the courthouse after the hearing. "There has never been any expression of remorse."

After sentencing, Marinello was transferred to the Elayn Hunt Correctional Center in St. Gabriel, said Pam Laborde, spokeswoman for the state Department of Corrections.

"That's typical of inmates coming into the system for the first time, " Laborde said. "He will be evaluated there and then he'll be given a permanent housing assignment."

Whether he will serve out his sentence at the Louisiana State Penitentiary at Angola, where lifers normally go, remains to be seen, she said.

Assistant District Attorney Tommy Block said he expects that Marinello will be sent to Angola, "where he will live out the remainder of his life in obscurity and anonymity."

"His behavior during his trial and subsequent to his conviction was characteristic of his inflated ego and unbridled arrogance, " Block said. "His lack of remorse is appalling."

Marinello told detectives and testified at his trial that he was driving to Byram, Miss., to watch a televised Saints game with friends when his wife was shot. Prosecutors attacked his alibi by presenting Marinello's cell phone records, along with data from cellular transmission towers that line the interstate along the route to central Mississippi, that show he left the New Orleans area later than he claimed.

During the trial, Marinello tried to steer the jury's suspicion to Peter Caruso, Liz Marinello's ex-husband, whom he suggested had a motive. When Liz Marinello died, they were in the middle of a contentious custody dispute over their daughter, who is now 12.

"That is, the bond between a mother and a young girl, " Caruso said.

Liz Marinello's aunt, Brenda Fontenot, also weighed in, telling Marinello he used people and discarded them when he has no use for them. "Your whole life is full of lies, " she told him.

Judge Conn Regan of the 24th Judicial District Court, who moved the trial to Lafayette after ruling that pretrial publicity tainted the pool of potential jurors in Jefferson Parish, said he thought Marinello got a fair trial.

He also said he thought that prosecutors proved their case beyond a reasonable doubt, and that he listened to Marinello's more than six hours of testimony in his defense.

"I found his testimony unworthy of belief, " Regan said.