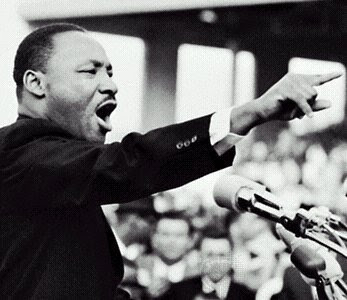 What we take, and don’t take, from MLK
posted by Doron Taussig
January 19th, 2009

I thought this post from Matthew Yglesias provided an interesting thing to think about on MLK day. Yglesias argues that our society is very particular in what we honor about Dr. King — we talk a lot about his struggle for racial equality, but not so much about his embrace of non-violence:

"We’ve by no means conquered bias and prejudice or overcome the lingering scars of the major injustices of the past, but on the level of message nowadays you don’t see anyone within a thousand miles of mainstream politics denying the desirability of racial equality. On violence, we’re in another world entirely. By the standards of today’s discourse, King would be considered deeply unserious. Serious people understand that if you think something is important, the serious way to go about expressing that is by voicing support for having other people go kill other people."

Now, in college sociology classes they teach you that King's non-violent tactics worked partly because others, like Malcolm X. and Stokely Carmichael, were threatening violence. And this also gets left out of the picture. So it's a weird situation where a) King gets celebrated and b) people who rejected his non-violent strategy are not celebrated, but c) the lesson we take from all of this as a society is that non-violence doesn't work in our present-day predicaments. The kids must be so confused.