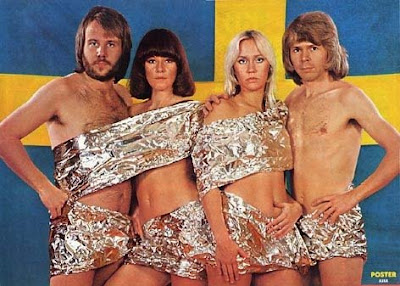 ABBA, the Swedish pop phenomenon of the 1970s and 1980s, found fame by winning the cheesy Eurovision Song Contest. Now, shockingly, it seems that the voting on this cherished European institution is subject to collusion that can skew the results.

Eurovision is an annual contest in which European countries elect a national song and award scores to others in the final. Some people suspect conspiracy in the voting. Greece and Cyprus, for example, always seem to favour each other. So Derek Gatherer, a computer programmer from Glasgow, UK, decided to investigate. He ran computer simulations to find the possible range of results if countries voted without bias between 1975 and 2005, and compared that to the real results.

Sure enough, conspiracy was afoot. In the early years, collusive partnerships between countries came and went. Since the mid-1990s when public telephone voting was introduced, however, a large "Balkan bloc" centred on Croatia has emerged to battle with a mighty "Viking empire" of Scandinavian and Baltic states. The copycat voting is now powerful enough to determine the contest's outcome (Journal of Artificial Societies and Social Simulation, vol 9 (2), p 1).

Gatherer says he thinks the collusion has become part of the fun and says he doesn't plan to warn the contest organisers: "I think they probably already know."

His tip to win the contest in May? Bosnia-Herzegovina.

Here’s more articles from everything in relation to ABBA’s music, such as Mamma Mia!-The Movie, Muriel’s Wedding, Björn Ulvaeus, Meryl Streep and so on.

‘It would be nice to have a woman President. I think half the Senate should be women, half of Parliament, half the ruling mullahs. But that will never happen, darling!’

Meryl Streep: Oscar-winning actress, on her views on government

MICHAEL SIMKINS: We had the time of our lives 387 shows (and a power cut)

My agent had called, back in 2000. ”You’ve got an audition for a new musical,” he said. “Twenty-five of ABBA’s greatest hits shoehorned into a new story about a woman running a bar on a Greek island.” We tittered privately at such a ludicrous idea.

Boy, were we wrong. There are few sensations in life more wonderful than striding out on a stage dressed in gold spandex to a couple of thousand ecstatic fans. During my stint in the production (as one of the possible dad’s) I did 387 performances (it would have been 388 had Westminster Council not drilled through power cables one evening, thus throwing the stage into darkness). But even on Friday matinee in darkest November to auditoriums full of uncomprehending German businessmen, the show never failed to work its magic.

The Littlestar management are legendary, in a business not always noted for its philanthropy, for looking after their actors, a commitment that has been repaid in that it is known as one of the best gigs in the West End. They also throw great parties, usually with a free bar, always a useful tool in keeping the troops happy.

Of the original group, Björn, Benny and Frida all joined us on stage on various occasions, each time to an ovation that could have been heard back in Sweden. Heady days.

Watching Pierce Brosnan playing my part in the movie reminded me how different life could have been if I’d ever got a shot at ‘Remington Steele’. As the old theatrical saying goes, it’s not enough that you succeed – your rivals also have to fail; but Brosnan was having none of it, with a nice understated quality to his portrayal, and looking a million dollars, damn him.

In fact the film cast are obviously having as much fun as we all did. Or, to quote a well-known lyric, they’re having the time of their lives…