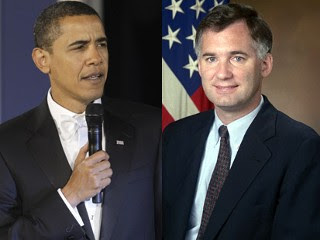 Experts and watchdogs say they cannot fathom how President Obama's choice for the Pentagon's second-in-command, currently a lobbyist for a defense giant, could be nominated under the principles of his new ethics rules.

"It appears to be a black-and-white case. I am unaware of what makes it so gray in the mind of President Obama," said Winslow T. Wheeler, a former congressional budget staffer now with the Center for Defense Information, on the president's choice of Raytheon lobbyist William J. Lynn to serve as Deputy Secretary of Defense. Wheeler said it would take a "gigantic loophole" to squeeze Lynn, a top executive for defense giant Raytheon who registered to lobby for the company as recently as last June, into the office.

"We need to close the revolving door that lets lobbyists come into government freely," Obama said yesterday upon signing the order. ...