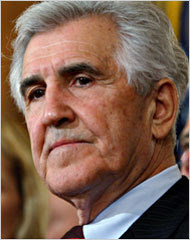 The former majority leader of the New York State Senate was indicted today, charged with steering state and union contracts to companies that paid him $3.2 million disguised as consulting fees.

Joseph Bruno, 79, a state lawmaker from Albany for 32 years before his retirement last year, pleaded not guilty to eight corruption-related counts during a court appearance today. Prosecutors allege that he used his power between 1993 to 2006 to help a handful of companies.

A defiant Bruno, a former boxer, told reporters outside the federal courthouse today that the FBI's three-year probe was a "get Joe Bruno campaign."

"This is a three-year fishing expedition that smells really really bad and it really stinks, in plain English," Bruno said, according to the New York Daily News.

Like many old-school politicians, Bruno has become a revered, somewhat iconic figure in New York state politics. He grew up in a poor neighborhood north of Albany and worked his way through college before becoming a top executive at a telecommunications company.

Along the way, he had "developed a taste for fine things nice cars, jet travel and expensive suits," according to his hometown newspaper, the Albany Times Union.