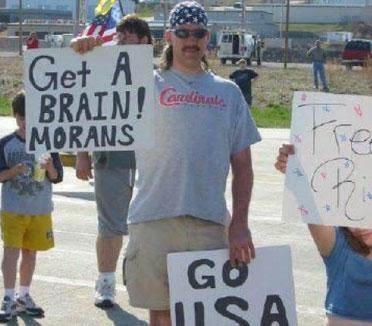 A Third (White) Way? - " ... While some factions like The Eagle’s Forum, The National Rifle Association, and Team America Political Action Committee have entered the politically charged minefield to control the Republican Party, other organizations like The Constitution Party, John Birch Society and the overtly anti-Semitic American Free Press hope that they will be able to create a third alternative to the current two party system. ... "

... According to the Chicago Tribune there have been at least 200 hate incidents directed at Obama and his supporters. Some of these incidents have included cross burnings. A tactic historically used by the Ku Klux Klan to intimidate blacks.

However it is beyond the graffiti, intimidation, and harassment that the far right is building its true power. With Republican leadership engaged in an internal power struggle to control the party apparatus, extremist factions within the party are seeking to strengthen their influence while more extreme external organizations hope that the current political vacuum will allow them to increase the influence of white nationalism in the American body politic.

While some factions like The Eagle’s Forum, The National Rifle Association, and Team America Political Action Committee have enter the politically charged minefield to control the Republican Party, other organizations like The Constitution Party, John Birch Society and the overtly anti-Semitic American Free Press hope that they will be able to create a third alternative to the current two party system. Regardless of the differences, what each faction shares is the belief that waging political attacks against President Obama will allow them to both undermine the incoming administration and grow their membership.

Political attacks on Obama began immediately after the last vote was cast. On December 1st and again on the 3rd a group called We the People Foundation ran full page ads in the Chicago Tribune questioning Obama’s citizenship. By law an American president is required to be born on U.S. territory and We the People Foundation (run by Robert Shultz) hoped to raise doubt regarding the right of Obama to be president. What the Chicago Tribune failed to point out when they ran the ads was that Shultz, a long time far right tax protester, bases his anti-tax theory on the belief that as a “free white sovereign male” he is not required to pay income tax. Shultz also argues that the 14th Amendment to the U.S. Constitution is illegal.

This particular attack on Obama is part of a larger tendency within the American far right to dismantle the 14th Amendment to the United States Constitution. Brought into law after the American Civil War, the 14th Amendment defined legal citizenship for those born in the United States. This was a major blow against white supremacy after the Civil War because it superseded race, religion and ethnicity as the basis of citizenship.

Under the guise of “controlling immigration”, the far right Federation for American Immigration Reform (FAIR), the most influential anti-immigrant group in the United States, has stated publicly that one of its top goals for the next federal legislative session is to restrict the 14th Amendment. The Federation for American Immigration Reform was founded by John Tanton, a conservationist and retired ophthalmologist. FAIR has received 1.2 million dollars (U.S.) from the “racial science” foundation the Pioneer Fund. FAIR has many associations with political extremists including white nationalists.
Bob Dane the spokesperson for FAIR told the newspaper Sacramento Bee that “To deal with this tidal wave of human beings coming across the border, repealing the 14th Amendment would be an effective tool.” In reality, far from curbing immigration ending the 14th Amendment would effectively reverse major gains of the black civil rights and women’s rights.

While FAIR prepares to fuel bigotry by attacking immigrants and civil rights the National Rifle Association (NRA) has sought to sow fear and suspicion of a multi-racial democracy amongst whites by claiming that Obama has plans to pass laws that will allow the government to confiscate their guns. While these rumors are completely unfounded it has served to grow the ranks of the NRA. It has also vastly increased the sale of guns and ammunition since the election in the neighborhoods of white America where neo-Nazi and Ku Klux Klan organizations litter the streets with leaflets whispering of imminent “race war.”

Unsurprisingly hate violence is on the rise according to the Leadership Conference on Civil Rights. The victims—Jewish, black, homosexual, and immigrant—are innocents in an environment created by white nationalists out to undermine the Obama presidency at any cost. A successful black presidency undercuts the bigoted arguments of white nationalists and affirms the possibility of a multiracial civil society—one where “the content of a person’s character means more than the color of their skin.”