Book Review: Jonathan Yardley on 'The Big Rich' - The Rise and Fall of the Greatest Texas Oil Fortunes 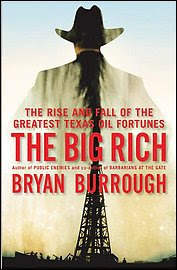 " ... Hunt, a bigamist, 'a strange man, a loner who lived deep inside his own peculiar mind,' was famous during his lifetime for extreme right-wing activities, but his name now means less than that of his universally well-liked son Lamar, a founder of the American Football League and engineer of its momentous merger with the National Football League. ... " 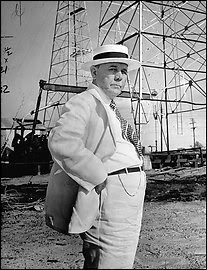 Hugh Roy Cullen was a fifth-grade dropout who used his millions to joust with politicians from Wendell Willkie to Dwight Eisenhower. (Dmitri Kessel/time & Life Pictures/getty Image)

For me as doubtless for uncountable thousands of others, the image of oil-rich Texas was shaped for good by the second half of George Stevens's sprawling film "Giant" (1956), adapted from Edna Ferber's bestselling novel. Jett Rink, a charmingly loutish wildcatter played by James Dean, strikes oil on a tiny patch of land, builds it into a vast empire, transforms himself into the epitome of nouveau-riche vulgarity and, in the climactic scene, makes a drunken fool of himself before an audience of other arrivistes brought together to celebrate his spectacular wealth. As Bryan Burrough summarizes it in The Big Rich:

"The mass media's discovery of ultrawealthy Texas oilmen in 1948, and the resulting caricature of flamboyant, jet-setting billionaires popularized in Giant, introduced the country to a new regional archetype -- funny, silly, harmless Texans who rode ostriches, wooed Hollywood stars, and scattered silver dollars on the sidewalks of Houston and Dallas like so much pocket lint. It was as if American had acquired an exotic new animal for the national zoo, Texas oilicus."

The stereotype persisted for years, indeed is widely believed in to this day, though it has expanded to include "secretive oil billionaires plotting an ultraconservative takeover of America," the "alternately kooky and villainous portrayals of Texans in Dallas and movies such as Doctor Strangelove and Oliver Stone's JFK," Texas "millionaires who were seen as unlettered, uncouth know-it-alls," and "the Evil Texas Oilman" engineering assassinations and other vile deeds. Still more dimensions were added during the administration of Bush II, with gun-slinging cowpokes swaggering into foreign territories and vast conglomerates raking in the profits from these international adventures.

Like most stereotypes, this one contains elements of truth as well as exaggeration and condescension. It is one of Burrough's aims in The Big Rich to separate truth from stereotype, a task he performs meticulously and occasionally amusingly. A native Texan, former Wall Street Journal reporter and co-author (with John Helyar) of Barbarians at the Gate: The Fall of RJR Nabisco, he is slightly defensive about his home state but sufficiently clear-eyed to recognize wretched excess when he sees it. His chronicle begins in the 1920s, when people started drilling for oil in Texas in a serious way; follows the development of the great oil fortunes through the ensuing four decades; then chronicles their decline "as their industry withered" and the Middle East became the greatest of all the world's gushers. It's a cautionary tale about the evanescence of wealth and glory, but it's also first-class entertainment.

Burrough's focus is on four men who by the early 1930s had presided over one of "the greatest periods of wealth generation in American history, in size perhaps the largest creation of individual wealth between the Gilded Age and the Internet boom of the 1990s." He writes: "The fortunes forged during the Depression created a new top layer of Texas society, what came to be known in later years as the Big Rich. This was wealth on a scale entirely new to the state, and during the 1930s Hugh Roy Cullen, Clint Murchison, Sid Richardson and H.L. Hunt, soon to be known as the 'Big Four' oilmen, laid the foundations of a flamboyant lifestyle that would come to define the image of Texas oil. There were mansions to build, presidents to meet, European vacations to take, islands to buy, and children to raise."

To say that all four men are now almost completely forgotten outside Texas would be an exaggeration, but not by much. Cullen, "a fifth-grade dropout who in his heyday was probably America's richest man," may be remembered beyond Houston "as an early champion of Texas ultraconservatism," but even that memory is fading rapidly. The root of Murchison's fortune was an "instinctive mastery of banking and lending practices [that] translated easily into an understanding of oil field drilling and geology," but he's chiefly remembered now as the original owner of the Dallas Cowboys. Richardson, who "at his death controlled more petroleum reserves than three major oil companies . . . left few footprints on history [and] attracted no biographer." Hunt, a bigamist, "a strange man, a loner who lived deep inside his own peculiar mind," was famous during his lifetime for extreme right-wing activities, but his name now means less than that of his universally well-liked son Lamar, a founder of the American Football League and engineer of its momentous merger with the National Football League.

As Burrough says, "In the first years after World War II," these four "had emerged as a handful of the richest men in America -- and no one knew it. It wasn't just that few people understood how wealthy they were. Beyond the insular world of Texas oil, almost no one knew they existed." By 1948 "the Big Four had garnered precisely three references in the nation's newspaper of record, the New York Times." Then in that same year, Life and Fortune magazines published articles about the Big Rich that "triggered a seismic shift in the way America viewed Texas, especially its oilmen." The Big Four weren't especially eager to cooperate with the press, but in a fifth oilman, "many writers found exactly the kind of Texan they were looking for." Burrough continues:

"The stereotype of the raw, hard-living, bourbon-swilling, fistfighting, cash-tossing, damn-the-torpedoes Texas oil millionaire did not exist before Glenn McCarthy rocketed into the national imagination in the late 1940s. Yet McCarthy was all that and more. Little remembered today, it was McCarthy, and his quixotic dreams, who, more than H.L. Hunt or Roy Cullen or his wealthier peers, introduced Americans to the changes oil had brought to Texas. The distilled essence of swaggering Texas id, McCarthy rubbed elbows with Howard Hughes and Hollywood stars, drank and brawled his way from Buffalo Bayou to Sunset Boulevard, and, at the peak of his fame, adorned the cover of Time. No Texas oilman ever rose so high or fell so hard."

McCarthy, who was the model for Dean's Jett Rink character in "Giant," was, in the words of another oilman, "possibly the best practical oilman the country had produced, an improviser who could drill with junk [and who possessed] a knack for finding oil he couldn't explain because it came installed in his system like an antenna." He amassed a huge fortune in the 1940s, blew it, amassed another, blew that too. He built a great hotel in Houston and staged a garish opening party that was the model for the movie's climax, then gradually faded into obscurity, reappearing from time to time to refurbish his image as "the Lone Star playboy, the swinging oilman who romances starlets between trips on his airplane to see his next gusher." Eventually, though, he stayed away from the spotlight, and at his death in 1988 few remembered him.

A considerably more lasting presence in American life has been big oil's "contribution to the growth of right-wing policies and politicians, especially in their most radical guises . . . bankrolling everything from mainstream Republican thinktanks to Senator Joseph McCarthy's red-baiting campaigns of the 1950s to extremist groups that openly espoused racism and anti-Semitism; later, oil money helped bankroll the birth of the religious right." Burrough argues that the explanation lies in "the deep-tissue insecurity of the nouveau riche. As one oilman told a magazine writer in 1954: 'We all made money fast. We were interested in nothing else. Then this Communist business suddenly burst upon us. Were we going to lose what we had gained?' "

That's fine as far as it goes, but another explanation lies in the frontier mentality that has always characterized Texas and much of the West as well, the passionate belief in individualism combined with deep suspicion of government and any other large outside agency. In league with the "Southern strategy" that Richard Nixon employed to exploit racial fears in the Old South, Texas radicalism completely transformed the Republican Party, replacing Robert Taft and Everett Dirksen with Strom Thurmond and Tom DeLay. Whether this radicalized "base" will be able to continue its dominance of the GOP after the 2008 election remains unclear, but its influence on the country has been disproportionate to its actual size.

The Texas oilmen who helped spawn it are long since gone, and their fortunes have been diminished for many reasons. Burrough is right to insist that they weren't quite the caricatures that Easterners found amusing or frightening, but his forthright, unsentimental book leaves little doubt that the caricatures had their roots in reality. ·