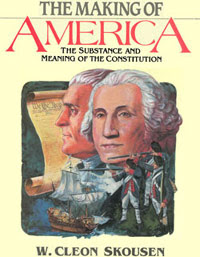 Mitt Romney is so right-wing that even the CIA-subsidized fascists at the National Review consider him a radical:

"Over the weekend, a YouTube video of Mitt Romney arguing with an Iowa talk-radio host began rocketing around the Internet. The 20-minute conversation was somewhat startling in that Romney talks about his Mormon faith in greater depth than he publicly has thus far. ... "

"'You and I share a common affection for the late Cleon Skousen,' the radio host says. The former governor agrees, affirming Skousen was his professor and when the radio host professes his fondness for Skousen’s book The Making of America, while he acknowledges he hasn’t read it, Mitt quickly says 'That’s worth reading.' ... ” - Mark Hemingway, "Romney's Radical Roots":
http://article.nationalreview.com/?q=MDRhZWFkNWE2OTQ0MGIwYzZmMWQ3MjA5OWIxYzQ0YTU=
••••••••••••••••••••
Pastor Chuck Baldwin, a "Christian" fascist tight with the Birch Society Nazi front (also, like Romney, a recent presidential candidate): " ... In 1958, Cleon Skousen, a former FBI agent (a man I was fortunate enough to get to know before his death), wrote a book entitled The Naked Communist. In it, he outlined the long-term communist agenda. Since then, the movers and shakers of the New World Order have successfully achieved many of these goals within the U.S. ... "
http://www.newswithviews.com/baldwin/baldwin488.htm

W. Cleon Skousen was, without a doubt, a real piece of work who, despite his schmoozings of top Mormon leadership, ultimately became an official LDS embarrassment

In the wake of Skousen's recent death, below are some observations assembled from my personal Ezra Taft Benson and Skousen files (combined with research from other sources in my home library) on Skousen's colorful, controversial life and his bizarre mix of apocalyptic religious/political beliefs: CLEON CLINGS ON TO McKAY: SKOUSEN'S INSIDE TRACK WITH THE MORMON CHURCH HIERARCHY

In 1962 LDS General Conference, McKay recommended that members of the Church avail themselves of Skousen’s book, The Naked Communist, declaring:

“I admonish everybody to read that excellent book of [former FBI agent and then-Salt Lake City Police] Chief Skousen’s.”

In his officially Mormon-blessed book, Skousen warned readers to be on the alert against a worldwide Marxist revolution dedicated to:

. . . “the total annihilation of all opposition, the downfall of all existing governments, all economies and all societies,” through the creation of “a regimented breed of Pavlovian men whose minds could be triggered into immediate action by signals from their masters.”

To fight the international Red menace, Skousen extolled Brigham Young University as a pre-eminent religious training ground in the “war of ideologies” and urged concerned parents:

“We should not sit back and wait for our boys and girls to be indoctrinated with materialistic dogma and thereby make themselves vulnerable to a Communist conversion when they are approached by the agents of force and fear who come from across the sea.”

Shining an altogether different light on Skousen’s work, Richard Dudam, author of the book, Men of the Far Right, wrote:

“Skousen’s book, the Naked Communist, is a Bible of the right-wing movement and is promoted heavily by many of the extremist groups. In it, he asserts that the first Russian sputnik was built with plans stolen from the United States after World War II and that President Batista, the former Cuban dictator, was really a sincere, pro-labor, popular ruler.

"Skousen advises legislators to overthrow Supreme Court restrictions on actions against persons suspected of being communists. He urges businessmen . . . to seek help from the American Security Council [a Chicago-based group of ‘right-wing military men and businessmen’ that operated ‘a private loyalty-security blacklist where employers could check their employees and job applicants for indications of left-wing connections.’]”
_____
SKOUSEN'S BEWILDERING BACKGROUND

Skousen was removed from his post as Salt Lake’s police chief by then-city mayor J. Bracken Lee, who called him “an incipient Hitler” who “ran the [SLC] police department in exactly the same manner as the Communists in Russia operate their government.”

Skousen was an active barnstormer and speaker for Fred C. Schwartz’s ”Christian Anti-Communist Crusade.” Life Magazine noted that Schwartz “preached doomsday by Communism in 1973 unless every American starts distrusting his neighbor.”

Although not an official member of the John Birch Society, Skousen was a die-hard supporter, serving as an active cohort in its “American Opinion Speakers Bureau,” which included among its Far Right allies my uncle and high-ranking Birch Society officer, Reed Benson.

In 1963, Skousen published a pamphlet, The Communist Attack on the John Birch Society, in which he claimed that the Birch Society had been “dishonestly ridiculed and smeared at the instigation of the international Communist conspiracy.”

He further claimed that the Birch Society was “marked for annihilation because it was becoming highly successful in awakening the American people.”

He also accused Americans who criticized the Birch Society as “promoting the official Communist party line.” 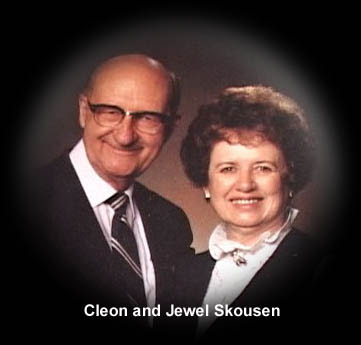 In 1970, amid growing college protests against BYU sports teams for the LDS Church’s anti-Black priesthood policy, Skousen published a tabloid featuring the screaming headline, The Communist Attack on the Mormons.

The article asserted that:

" . . . [Professional] Communist-oriented revolutionary groups have been spearheading the wave of protests and violence directed toward Brigham Young University and the Mormon Church,” [employing] “Marxism and Maoism as their ideological base and terror tactics as their method . . .”

Skousen warned that Communists were plotting to manipulate press reports into depicting the Mormon Church as being “rich, priest-ridden, racist, super-authoritarian and conservative to the point of being archaically reactionary.”

He claimed that, in fact, the Mormon Church was one of the Communists’ “prime TARGETS FOR ATTACK” because it is “STRONGLY PRO-AMERICAN” and that the ‘Negro-priesthood issue” was being used as a “SMOKESREEN” to “further their ulterior motives.”

Citing Ezra Taft Benson’s speech, Civil Rights: Tool of Communist Deception, he warned that Communist-inspired assaults on the Mormon Church were designed to:

" . . . create resentment and hatred between the races by distorting the religious tenet of the Church regarding the Negro and blowing it up to ridiculous proportions."

Skousen eventually established the Freeman Institute in Provo, Utah. The group derived its name from the Book of Mormon “freemen” and initially drew many Mormon Birchers into its ranks. My father, Mark Benson, was the Institute’s “Vice President in Charge of Development” and my grandfather formally spoke to its members.

In a letter sent to my grandfather (which, despite its form fundraising format, my grandfather marked in red pen with a handwritten notation, “Confidential”), Skousen warned:

". . . [The] so-called ‘Council on Foreign Relations’ [has been] “set up . . . to groom ambitious one-world political personalities for leadership in all major departments of the American government from the President on down. . . .

“Their latest triumph was the election of Jimmy Carter. . . .”

“I wonder how people who say there is ‘no such thing as a conspiracy’ will deal with this one?”

He also forewarned Ezra Taft Benson that the one-world planners intended to celebrate the upcoming “200 anniversary of the United States Constitution by scrapping it.”

In an apocalyptic conclusion to his letter, Skousen, under the sub-heading “We Need Millions of Freeman,” told my grandfather:

“I don’t know how all this affects you, but it puts a fire in my veins. I hope that in this coming year we can double or triple the number of Freeman and eventually we can challenge these advocates of world serfdom and drive them out of power. . . . I pray it will happen soon. And we must do everything we can to help make it happen. That’s what you are helping to accomplish, and I am grateful to you for your support.

“See you next month!”

As a young consultant to Fisher Controls in Marshalltown, he spent a lot of time around here in the late '70s.

The interview was late getting started, so Mickelson politely asked if they could "dispense with the niceties." It's amazing how quickly a set of niceties can vanish.

He opened with their "common affection" for the late Cleon Skousen.

At that point, Mickelson's listeners were probably struggling to place Cleon Skousen. Didn't he play first base for the Yankees?

They didn't know the Libertarian host and the Republican candidate would soon be squabbling with each other about abortion and the Mormon Church.

They had no idea the candidate would be walking out of the studio, saying he didn't appreciate Mickelson calling him a bad Mormon.

You'd call it great radio, except for one thing: Some of the best stuff took place off the air.

The camera never stopped rolling in the studio, though, and you can watch it all online.

If you do, you'll witness a side of Romney the public seldom sees. Mickelson wouldn't agree, but it's a side the candidate should channel more often. Look! He's quick on his feet. He's showing some fire, some passion, some spontaneity.

Skousen, for the record, was a constitutional expert. Romney was in his class at Brigham Young University. Mickelson read his book,
Mickelson loves the book. He says it takes you inside the minds of the framers when they drew up the Constitution.

"You can never be hustled by a politician again," he told Romney.

Niceties out of the way, Mickelson got to the point:

"Cleon is spinning in his grave, sir."

It was downhill (or maybe uphill) from there. They argued about the church's official position on abortion and what is or isn't grounds for disciplinary action. Mickelson compared Romney to "cafeteria Catholic" Ted Kennedy.

They interrupted and corrected each other. When they left for a commercial break, Mickelson took the opportunity to tell Romney he was making a big mistake, distancing himself from his religion.

Romney said he wasn't. If you have sex outside marriage, the church says you should be excommunicated. Just because you believe in something, do you turn it into a law?

Romney: "Let me say once again that I understand my faith better than you do. You don't believe that, do you?"

Romney: "Then it's hardly worth having a discussion, then."

"I don't like going on the air here and have you going after my church," Romney said when Mickelson suggested they could do this again when they had more time.

After the on-air interview, Mickelson told Romney he takes "this stuff seriously."

An exasperated and sarcastic Romney: "Oh, I don't, though. For me, this is all frivolous. Come on! I'm running for president!"

Running for president, leading the Republican field in Iowa.

Romney told Register reporter Thomas Beaumont he didn't realize the camera was rolling during the break, but it wasn't an issue. It goes with the territory.

"So I don't have a complaint."

Romney said he wasn't hearing many complaints about his radio performance. At an appearance Wednesday, he got a compliment.

"A man came up and said: 'I'm sure glad you expressed yourself so vehemently. I want someone with a backbone who can fight for us in Washington. I saw you on that WHO interview and I see you can stand up for yourself.'"

Mickelson wasn't backing down, either.

"He was giving me a politically pragmatic answer to a pro-life question," he said Wednesday. "I served up a softball and he hit a grounder. I'm happy he's pro-life, but the position is based on his feelings and thinking alone. He considers himself the highest authority on the issue. He's building a house on sand."

Then he backed off just a bit.

"I have to admit I went a little Chris Matthews on the guy," he said, "but I felt I was getting hustled."