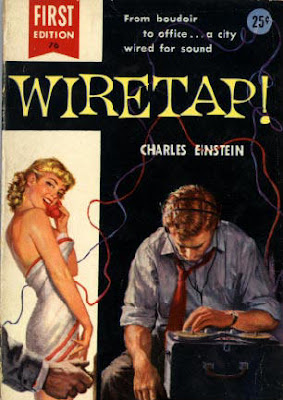 You remember the explanation: Bush's NSA targetted "terrorists," not here but overseas - far, far away - and the telecom companies had to have immunity for doing their patriotic duty, "protecting our freedoms." After all, we're at war ... well, okay, primarily with vile liberal/socialist newspaper reporters and even bloggers ... "like me," quoth The Joker. It's a good thing AT&T has immunity from prosecution now - those insidious, terrorist-loving reporters, backed by devious civil rights groups like the ACLU, would have abused the legal system by appealing to bothersome Constitutional legal restraints that, for inexplicable reasons, protect reporters. What's needed, "pragmatically" speaking, are obviously more media distortions to shape public opinion, silence the bleeding hearts and hand wringers. Fascism rules. Get used to it, punks. (And don't listen to moonbat conspiracy theorists - what do they know?)

Russell Tice has dropped another bombshell. More than two years after he leaked the existence of the NSA’s warrantless wiretapping program to the New York Times in late 2006, Tice says warrantless wiretaps specifically targeted journalists and news organizations - all day, every day.

The original outrage over the warrantless wiretapping arose out of what appeared to be (though it was never confirmed) a massive data mining effort on the part of the NSA that routinely - and without apparent concern for the search and seizure requirements of the Fourth Amendment - redirected untold numbers of communications onto NSA super computers for analysis. The latest allegations, flushed out over the course of two interviews with MSNBC anchor Keith Olbermann, reveal the outline of other shadowy efforts by the NSA whose existence had previously been the subject of speculation.

Many doubted the NSA’s initial assertion that only international communications of legitimate terror subjects had been monitored. But at least as far back as the revelations of Alberto Gonzalez’s attempt to convince a sedated and semi-conscious Attorney General John Ashcroft to sign off on the constitutionality of a program of dubious provenance - that was not part of the warrantless wiretapping scheme reported on previously by the Times - rumors have circulated of other, more secret programs that may or may not have targeted Americans.

Don’t let the door hit you

Tice, who was canned by the NSA after uncovering the wiretapping program and lives under constant surveillance, alleged that superiors at the NSA informed him that news organizations were monitored at all times to, well, ensure that freedom of the press would remain sacrosanct. Active monitoring of particular organizations is a rather different beast, however, than the algorithmic data mining that was the source of the initial controversy and remains the subject of litigation.

Congress capitulated on the algorithmic data mining when it rewrote the FISA bill last summer. The bill has loopholes big enough to fly Air Force One through, and it was almost certainly designed to legalize the very activities that caused so much outrage and largely sideline the already extraordinarily pliant FISA court. Under the rewritten rules warrants were no longer required: "targets" had to be identified, and a plan designed to "minimize" surveillance of the innocent put forth. Even so, information obtained on the untargeted could be used provided that it was not obtained "intentionally." Of course, algorithms are nothing more than mathematical models and are utterly incapable of forming intent.

Targeting news organizations and reporters on a non-stop basis, however, requires something more methodical and finely tuned than Google-style data mining and would seem to run afoul even of the revised, watered-down FISA statute. If Tice’s allegations are true, it would help explain why many loyal Bushies in the intelligence community and elsewhere continued to push for blanket immunity, even after the FISA revisions passed and even after the FISA court issued an unusual, self-immolating opinion that warrantless wiretapping could be constitutional - although the court handed out retroactive warrants like candy.

Tracking the Bush Administration as it slithers into history

The existence of the program targeting journalists, if true, raises more questions than it answers, as it almost certainly is not the only program of its kind. Spying on journalists is useful to the government for a variety of reasons - leaks can be monitored, critical viewpoints tracked through the ether, and sources intimidated. Journalists also tend to have extensive lists of important contacts, making the "six degrees of separation" game routinely played by intelligence agencies that much more fruitful.

Who else has been targeted, rather than hoovered up in a data mining dragnet? Surveillance of universities and high tech companies would almost certainly provide many of the same benefits as surveillance of journalists, maybe more. And if Tice’s analysis is correct, they would be attractive targets. We will probably never know. Regardless, NSA surveillance of Americans is far more ambitious in scope than previously imagined by any but the most paranoid. Tice speculated that the programs are partly made up of the detritus of the DARPA Total Information Awareness program that went down in flames after public outcry.

Lawrence Wright and James Risen, the Times journalist who initially broke Tice’s story, appeared on Olbermann’s "Countdown," to discuss circumstantial evidence that they had in fact been spied upon by the American government. Wright received a call from the FBI inquiring about phone calls they believed his daughter made to an attorney in London who represented a Gitmo detainee. His daughter was not listed anywhere on his phone records, however, which meant that a traditional wiretap was not the source. Risen’s lawyers - he is being sued by the government to reveal sources for his book "State of War" - discovered that his phone records had been shown to a grand jury investigating sourcing of the book.

Will they have standing to sue? We can only hope.