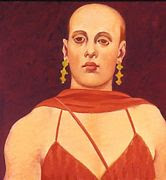 " The 66-year-old Mullarkey responded to ... criticisms by saying that artists should not be harassed over their beliefs and comparing being called a hypocrite to the 'brownshirt tactics' of the Nazis. ... Mullarkey had contributed to the Swift Boat Vets and POWs for Truth, which publicly called into question the war hero status of Sen. John Kerry. ... "

An artist known for her gay-themed work has inspired controversy for having made a $1,000 contribution to proponents of California’s Proposition 8, the ballot initiative that put the rights of gay and lesbian families up to popular vote and saw those rights taken away last November by a slim majority at the ballot box.

LoHud.com reported in a Feb. 5 article that Chappaqua, NY artist Maureen Mullarkey, whose paintings have drawn on Pride events and cross-dressing performers as subject material, had made the contribution to the anti-gay side of the ballot initiative, shocking and angering many in the GLBT community.

Said David Juhren of GLBT group LOFT, "There’s something very duplicitous in making money through depiction of the LGBT community through her art [which then is donated to an anti-gay cause]," the article reported.

Added Juhren, who serves as LOFT’s director of communications, "She’s relatively well-known, and that’s why it’s kind of a slap in the face."

The 66-year-old Mullarkey responded to such criticisms by saying that artists should not be harassed over their beliefs and comparing being called a hypocrite to the "brownshirt tactics" of the Nazis. Mullarkey stated that it is her belief that "marriage is the union of husband and wife--a premise so simple, so fundamental that nature and civilization itself both testify to the truth of it."

Added the painter, "Artists are not in the habit of imposing ideological conformity on one another or demanding it from others. Moreover, regard for individual gay persons does not require assent to a politicized assault on bedrock social reality and the common good."

Post-election analyses of voter patterns indicate that many of those who voted in favor of Proposition 8 were older, whereas younger Californians tended to vote against the measure. Race and religion also played roles in voting patterns, as did the voters’ level of education.

Mullarkey’s contribution was received by the California office of the National Organization for Marriage. The president of the group, Maggie Gallagher, was quoted in the article as saying, "The reason that seems so incongruous to some people is because they think the marriage issue is about whether you like or hate gay people."

Gallagher characterized a newspaper report on the contribution, published in the New York newspaper The Daily News on Feb. 3, as an example of a coordinated effort to intimidate those who seek to deny marriage equality to gay and lesbian families.

The Daily News article reported that when asked about the contribution, Mullarkey responded, "So? If you write that story, I’ll sue you."

The Daily News article quoted Leslie/Lohman Gay Art Foundation co-founder Charles Leslie as saying, "If I were a buyer of her work, I wouldn’t buy it anymore."

Such repercussions have drawn condemnation from anti-marriage equality groups who say they are being targeted for their opposition to marriage rights for same-sex families. The National Organization for Marriage was one of the anti-gay groups that sought the intervention of the courts to prevent public disclosure of those who contributed to the groups promoting the measure, the LoHud article said, citing calls for boycotts that have been issued against businesses whose employees have contributed to pro-Proposition 8 groups.

That effort came to nothing when a U.S. District court refused to issue an injunction to suppress that information. 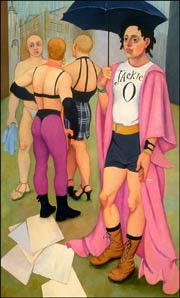 In a January 9 e-mail, Equality California stated that, "the leadership of Yes on Prop 8 filed a lawsuit in federal court to void a voter-passed proposition that requires the disclosure of information for people who donate more than $100 to a campaign. ... This is the same ’leadership’ that sent menacing letters to Equality California donors and corporate sponsors, threatening to ’expose’ them if they did not make a similar donation to the Yes on 8 campaign. This is the same ’leadership’ that filed briefs in the California Supreme Court that argue that the voter-passed proposition cannot--and should not--be overturned by a court."

Added the message, "For decades LGBT activists have stood proud, risking their jobs and safety for fighting intolerance.

"We’ve never asked for anything less than equality and now they want special rights." Gallagher claimed that, "People who gave as little as 100 bucks or less to Prop 8 have been subjected to organized Internet campaigns," the LoHud article said.

Added Gallagher, "It’s an astonishing outflow of what feels like, from our point of view, licensed hatred."

Indeed, a call to boycott the painter’s work has already gone out in the GLBT community, the article said, citing reader commentary posted at Web sites where the story has been reported.

At one GLBT site, JoeMyGod, reader responses ranged from " I don’t know much about art. But I know what I like. And I do *not* like this" and ""Maybe she can sell her... paintings to the mormons [sic]" to the more measured, "I tried not to be judgmental and looked at her work after I read the story. Her work is beautiful but I got a sense the was a homophobic overtone in her work. It says to me, ’Look how ridiculous and sad they all are,’" continued the comment.

Wrote another commentator, "A lot of us have been saying it for years: To straight America, we are a market to be exploited, nothing more. Mullarkey is only the latest demonstration of that."

Added another, "The quote about Dionysus makes her sound like someone who has read why too much Camile Paglia, and that never ends well."

The LoHud article cited a 2002 interview in which Mullarkey said that she was a traditional Catholic. The article also cited campaign finance reports that indicate that Mullarkey had contributed to the Swift Boat Vets and POWs for Truth, which publicly called into question the war hero status of Sen. John Kerry, the 2004 Democratic nominee for President.

The California Supreme Court has agreed to hear a case against the legitimacy of the California constitutional amendment that resulted from the passage of Prop. 8. Opponents of the measure say that Prop. 8 went too far for a simple amendment, and in effect revised the state’s constitution, which cannot be done with a simple majority vote.