Federal prosecutors in Chicago already charged a neo-Nazi with enticing others to do harm through posts on his racist Web site. But a new indictment against William White, of Roanoke, Va., released Wednesday adds details about his Web site writings involving the murders of Chicago federal judge Joan Lefkow’s mother and husband.

On March 1, 2005, White posted an article on Overthrow.com entitled “I Don’t Feel Bad About The Hit On Judge Lefkow — And I Don’t Think Others Should, Either.”

Lefkow had discovered her husband and mother murdered in her Chicago home. An intense manhunt ensued, with authorities initially focused on white supremacists. The year before, racist Matthew Hale was convicted of soliciting Lefkow’s murder after he was unhappy with the outcome of his civil case. But disgruntled litigant Bart Ross later admitted to the slayings in a suicide note. 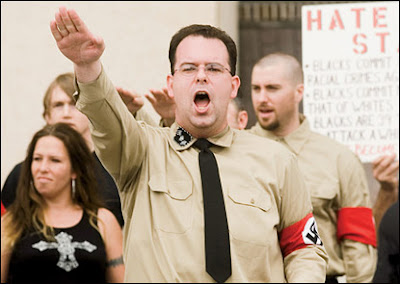 “I don’t feel bad that Judge Lefkow’s family was murdered today. In fact, when I heard the story I laughed. ‘Good for them!’ was my first thought,” White posted on his Web site. “Everyone associated with the Matt Hale trial has deserved assassination for a long time.”

White was charged last October with attempting to induce others to do harm to a juror in the Hale trial.

He pleaded not guilty this morning to his indictment. No trial date has been set.

The prospect of having Lefkow details introduced into the case adds a different dimension to the case, White’s lawyer said.

“They’re going to try to present evidence regarding Lefkow’s situation,” White’s attorney, Nishay K. Sanan said. “We’re asking that this case be transferred outside of the district.”

White is being held at the Metropolitan Correctional Center downtown. A judge has refused to release him on bond.

White also faces charges in Roanoke, Va. for allegedly making threats to, among others, a Mayor in New Jersey, a bank worker involved in a credit issue and a potential witness in a housing matter, Sanan said.