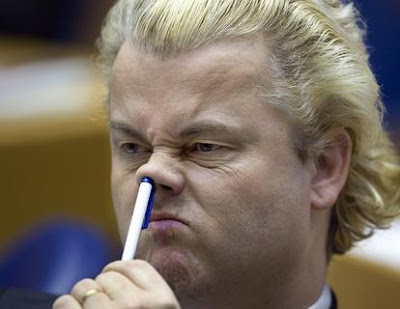 LONDON: A member of the Dutch Parliament who has compared the Koran to Hitler's "Mein Kampf" and blamed Islamic texts for inciting the attacks of Sept. 11, 2001, and other terrorist atrocities was detained by immigration officials at London Heathrow Airport on Thursday and forced within hours to board a return flight to Holland. His deportation had been ordered by Home Secretary Jacqui Smith on the grounds that his presence in Britain would be a danger to public safety.

The lawmaker, Geert Wilders, 45, had been invited to a showing at the House of Lords later Thursday of his 17-minute film, "Fitna," which caused outrage in wide areas of the Muslim world last year after it appeared on the Internet.

The film juxtaposes images of the Koran with footage of the 2001 attacks in the United States, as well as gruesome images of the Madrid rail bombings in 2004, the London transit attacks in 2005 and other atrocities, including a beheading in Iraq. It also suggests that parts of the Koran have contributed to provoking violence by Muslim extremists.

As he had planned, Wilders's deportation - an action that British officials said had taken place only three times previously in the case of a citizen from another European Union country who was not wanted in a criminal case - attracted widespread publicity.

Although informed of the Home Office ban by the British Embassy in The Hague this week, Wilders boarded a flight at Schiphol Airport in Amsterdam in the company of a posse of reporters and cameramen. He arrived at Heathrow to the accompaniment of live television coverage by Britain's main news channels.

Wilders, whose Freedom Party holds nine seats in the 120-seat Parliament, had framed the affair as a test of freedom of speech and, he said, as a demonstration of Muslim intolerance of criticism of Islam and of what he has called the "Islamicization" of Europe.

In Britain, at least, Wilders and his British host - Malcolm Pearson, a member of the United Kingdom Independence Party, which campaigns for the preservation of Britain's traditional culture - succeeded in stirring a strident debate that has exposed underlying tensions over Muslim issues.

The tensions showed up in an ill-tempered debate on Sky Broadcasting's main news channel as Wilders arrived at Heathrow. Intercut with shots of his plane landing and of him walking through a terminal surrounded by reporters, the debate featured Pearson and Nazir Ahmed, a Pakistan-born property developer who, as a member of the governing Labour Party, is one of a handful of Muslim lawmakers at Westminster. Ahmed led the lawmakers who lobbied intensively for the ban on Wilders.

Pearson, a businessman who made his fortune in insurance, suggested that Muslims are less tolerant of dissent and criticism than Christians.

"Why, if you are a Muslim and convert to Christianity, do you become an apostate, and why, if you are a Christian and convert to Islam, do you suffer no problem at all?" he asked. And he compared what he said was an unwillingness among Muslims to forswear the more warlike verses of the Koran to Christians taking parts of the Old Testament that speak of "Jehovah smiting the Malachites" as a justification for violence. "Why do you take the Koran so seriously?" he said.

Ahmed said that by inviting Wilders, who has been indicted in the Netherlands on charges of inciting hatred against Muslims, Pearson's group was providing the Dutch lawmaker with a platform to provoke "violence and hatred" against Muslims in Britain, the vast majority of whom disavow acts of terrorism by Islamic extremists.

He said that behind his claims of freedom of speech, Wilders was "a provocateur and publicity seeker" with no regard for what he described as "the great majority of Muslims who want to have the freedom to practice their religion without being insulted and threatened by people like Wilders." ...