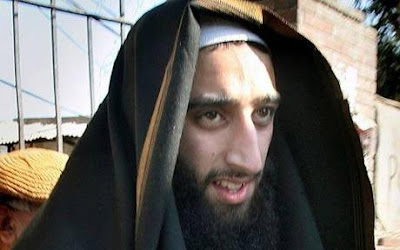 "A British al-Qaeda suspect reportedly killed by a US missile strike in a Pakistani tribal area was linked to the group's second-in-command, Ayman al-Zawahiri, according to officials.

"Rashid Rauf and a Saudi militant called Abu Zubair al-Masri were among five killed in a missile attack in North Waziristan on Saturday. Rauf, a British national, was alleged to have been the mastermind of an al-Qaeda plot to blow up passenger aircraft in mid-air after they left London bound for the United States. ... "

Families of those supposedly involved in the "plot" were paid off:

... Rashid Rauf, who was arrested in Pakistan, was the alleged al Qaeda connection to the alleged plot. But Rashid Rauf has played no role in the trial, because he's missing. He supposedly slipped away from a police escort last December while on his way to a court appearance. And he hasn't been seen since, although five policemen were arrested after his "escape" and nine have been sacked in its wake.

Where would the "Liquid Bomb" plot be without Rashid Rauf and Assad Sarwar? There would be no al Qaeda connection, no bomb-making expert, no bomb-making chemicals, nothing! So these are bad guys of the highest order: indispensable bad guys who allegedly meant us great harm. ...
•••••••
Rauf was Allowed to Escape from Prison

The "terrorist groups" that Rauf belonged to are "protected by the Pakistani intelligence service ISI, which itself cooperates closely with Britain's MI6, as befits a virtual branch of the CIA":

From: Inadequate Deception: The Impossible Plots Of The Terror War
winterpatriot.blogspot.com

... There are many ways to eliminate a cutout. Rashid Rauf supposedly "escaped" from the Pakistani police, even though it's fairly clear that he was deliberately released. And we may never see him again.

Thus the cutout has been removed, and the trail from the knuckleheads to the planners has been cut. But if you could follow it, where would the severed trail lead? To J-e-M? L-e-T? al Qaeda? More than one of the above -- or even all three?

Here we can get profoundly confused, especially if we forget that J-e-M is tolerated and L-e-T openly supported by the military government of Pakistan, which itself doesn't like India very much.

Both these banned terrorist groups are apparently protected by the Pakistani intelligence service ISI, which itself cooperates closely with Britain's MI6, as befits a virtual branch of the CIA.

You may recall Major General (Retired) Tanvir Hussain, who in the previous session served as Parliamentary Defense Secretary. Major Hussain raised a few eyebrows in a parliamentary debate when he said he had been a member of L-e-T. When he was asked for clarification, he didn't distance himself from the terrorists, nor did he claim that his association with them had ended. Instead the Parliamentary Defense Secretary of America's leading Asian ally in the Global War On Terror said that he speaks at L-e-T's conventions and admitted that he gives them other forms of assistance, too.

Don't be surprised if you haven't heard of this. Tanvir Hussain's statements were reported matter-of-factly in the Pakistani press, mentioned in a quizzical way by an Australian daily, and howled over by the Indian papers. But they were never reported anywhere else; no Western "news" outlet breathed a word of the story.

November 22, 2008—Rashid Rauf was arrested in Pakistan and was remanded to Adiala prison which, according to human rights campaigners, has been the scene of physical abuse and torture of terrorism suspects.

In December 2006 he resurfaced in court. A judge dismissed terrorism charges but said he should still face explosives and false identity allegations.

The UK pressed for his extradition over the 2002 murder of his uncle. That application was progressing when he escaped in December 2007.

According to the official version of events, he managed to unlock his own handcuffs and escaped while being allowed to pray alone at a mosque near the courthouse. The mosque in question is said to have high walls leading to open fields.

It's not clear to this day whether that is genuinely what happened, the suspicion being that pro-Islamist intelligence officials in Pakistan helped the Briton to quietly flee. ...

Extradition to the UK would have been a critical priority if Rauf was, as officials maintain, an "Al Qaeda link":

THE CURIOUS CASE OF RASHID RAUF - INTERNATIONAL TERRORISM MONITOR--PAPER NO. 161, By B. Raman: " ... Since Rashid Rauf was projected by the Pakistani authorities as the most important player in the plot and as the man, whose arrest led to the unearthing of the planned terrorist conpiracy in the UK, one would have thought that his being handed-over to the British for interrogation would have been of the highest priority to the British investigating authorities. But, no action has been taken so far. ... "
http://www.southasiaanalysis.org/%5Cpapers21%5Cpaper2052.html

" ... Rashid Rauf's escape now threatens to spark a major diplomatic row by reigniting questions about why Pakistan's authorities had not approved his extradition, despite repeated requests from Britain dating back more than a year. ... The fact Rauf was able to escape so easily will raise questions about the security status given to him by the Pakistani authorities. ... "

... Rauf is believed to have been one of five militants killed in Pakistan yesterday.

Critics of the action include Andrew Dismore, who chairs parliament’s human rights committee, and Patrick Mercer, former shadow security minister, who said: 'This raises the question of how much cooperation the British intelligence agencies provided in what is ultimately the execution of a British subject. The government must explain its involvement.' ... ”