Historical Perspective: Pilot, under vigilant eye of FBI, made trip to Terre Haute
By Mike McCormick
Special to the Tribune-Star

During a three-week stretch in late June and early July 1937 — 70 years ago — world gliding champion Peter Riedel was an American idol.

Four years later, Riedel was under the vigilant eye of the Federal Bureau of Investigation and its zealous director J. Edgar Hoover while making a cross country auto tour which included a stop in Terre Haute to visit with some new relatives. Accompanied by his new bride, art teacher Helen Klug — a Terre Haute native, Reidel was on his honeymoon.

Born in Saxony, Germany, in August 1905, Riedel was raised by an uncle after his mother committed suicide in 1914. In 1920, he attended his first glider championship meet at Wasserkuppe, taking with him an unfinished biplane glider of his own design.

He continued to compete, soon earning the confidence of philanthropist Karl Kotzenberg. As a result of that friendship, Riedel’s college education at Darmstadt Technical University was paid for and he earned an engineering degree in 1927.

Riedel trained to be a commercial pilot, securing a license in 1928, but jobs were scarce. Instead, he went to work for meteorologist Walter Georgii at Darmstadt Research Institute for Soaring Flight, conducting scientific tests. He stayed for six years.

Beginning in 1930, Riedel’s research flights were instrumental in the discovery of the up-current fields under cumulus clouds. He developed “cloud-hopping” to achieve spectacular gliding heights and distances. He also established innovative methods of thermal soaring without assistance from clouds.

Peter continued to engage in competitive gliding, establishing a world distance record of 142 miles in 1933 and winning the Hindenberg Cup at Wasserkuppe.

Reidel was primarily responsible for the popularity of gliding in Germany. By 1937, Germany had 50,000 glider pilots compared to only 500 licensed pilots in the U.S.

In 1934, Professor Georgii accompanied Riedel and pioneer German aviatrix Hannah Reitsch on a tour of Brazil and Argentina to promote motorless flight. Reitsch, who held several glider and aerobatics records and became a passionate pilot and follower of Adolf Hitler, became Reidel’s friend.

Peter found work as a pilot with Lufthansa, the German national airlines, in late 1934. But, two years later, he was drawn back to Latin America to work as a pilot for Scadtka Airlines of Colombia, where he was employed when his sailplane, Condor, was entered in the 1937 contest at Elmira.

When trophies were distributed July 11, 1937, Riedel was the recipient of the Bendix Gold Medal and $500 for the greatest distance flight: 133 miles. He also received the DuPont Silver Trophy for the second greatest altitude: 5,640 feet (though the New York Times reported Reidel reached 8,400 feet on July 6).

Richard C. duPont, of the famous duPont family, won the 1937 A. Felix DuPhttp://www.theforbiddenknowledge.com/hardtruth/hoover.jpgont Gold Trophy for altitude by soaring 5,980 feet. 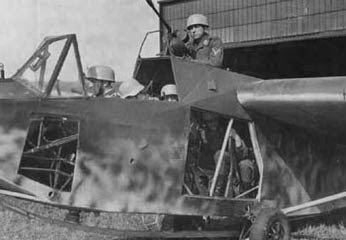 Riedel returned to Elmira for the soaring competition in 1938. By that time, he had been appointed the civilian assistant to Gen. Friedrich von Boetticher, the German military attache, in Washington, and was representing the German Aero Club.

Peter’s Kranich glider sported a red and black Nazi swastika on its rudder.

When asked, Riedel readily acknowledged that his job at the German embassy was to furnish the German government with available economic and industrial information about the U.S. He contended that he was not required to engage in spying or clandestine activities.

On July 3, 1938, Riedel soared by glider from Elmira to Hoover Airport in Washington, D.C. — more than 200 miles — in less than eight hours. Though he won the competition based upon score, as a German national he could not claim the U.S. title. 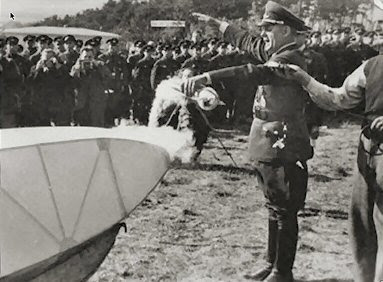 Photo: A Luftwaffe officer christens a glider, circa 1938

Riedel met Helen Klug, a graduate of John Herron Art Institute of Indianapolis, in Washington, where she was an art teacher.

Reidel already was on the “FBI’s watch list” in 1940. When it was learned that Reidel and Klug planned to get married on June 28, 1941, in Alexandria, Va., an urgent confidential dispatch was directed to Hoover inquiring as to whether “surveillance should be maintained on LIEUTENANT RIEDEL during the approximately 2 (two and one-half) weeks which he plans to be away from Washington, D.C.”

The answer was in the affirmative.

Confidential informants — one an American Automobile Association employee — provided detailed information as to the Riedels’ plan, which included leaving Washington, D.C. and traveling by auto to either Denver or Colorado Springs, with a possible side trip to the Grand Canyon.

The tour included stops in Terre Haute, where Helen’s parents Martin and Marie (Hahn) Klug and several of her siblings resided, and in Chillicothe, Ohio, where Justin Schinkle, one of Helen’s sisters, lived with her husband.

Many challenges and adventures confronted the couple for the ensuing six decades.

After a successful auction on May 20, a second auction involving personal property from the estate of Mrs. Jacob Baur, the widow of the Terre Haute man who founded Liquid Carbonics Corp and has been called “the father of the soda fountain,” will be conducted by Leslie Hindman Auctions of Chicago on June 27 and June 28.

A catalogue with descriptions and photos can be accessed online at www.lesliehindman.com.

The Baur property being sold next week consists of 104 lots: Lot 246 to Lot 349 in the catalogue. Once again, bidding ia available on eBay but you must pre-register.

Apparently the Terre Haute-area response to the story appearing in this column prior to the May 20 auction of Bertha Baur’s property was substantial.

The Federal Bureau of Investigation began stalking newlyweds Peter and Helen Riedel from the time they departed Washington, D.C., on July 3, 1941, until they lost them for awhile near Chillicothe, Ohio, the following day. 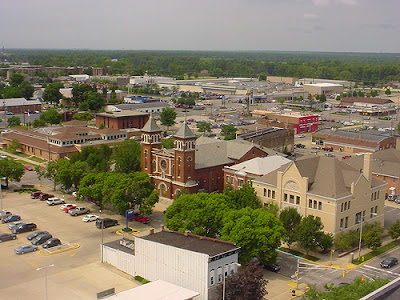 According to recently declassified FBI documents, a Dodge sedan with Indiana license plates was parked in front of the Schinkle residence.

The Riedels left Chillicothe for Terre Haute at 12:15 p.m., on July 5, but agents lost them for a second time in heavy Cincinnati traffic that afternoon for about an hour and a half.

Though the FBI renewed its chase later in the day, Special Agent-in-Charge E.J. Wynn of the Indianapolis Field Division revealed that surveillance of Riedel, renowned glider pilot and Air Attache from the German Embassy, had been lost for the third time.

This time the trail remained cold between North Vernon, Ind., and the Klug residence at 1200 S. Fourth St. in Terre Haute. The Riedels seemingly were unaware that they were being followed until Helen’s father, Martin Klug, said that “a couple of men in suits were parked” along the street. I don’t know who they are. They don’t live around here but they’re up to something.”

On Sunday, July 6, the Riedels resumed their westward trip. After a while, Peter noticed a black Ford with a two-way radio antenna following at 200 feet, speeding up when he accelerated and slowing when he braked or decelerated. When the Riedels stopped for fuel, the Ford with two male passengers pulled in at an adjoining pump. 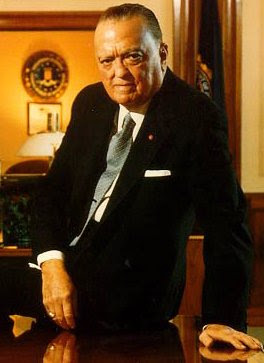 The men disclosed their association at a service station by inadvertently allowing Riedel to observe an FBI identification card. Peter promptly grabbed his movie camera and tried to film the meddlers but the men hid their faces.

Finally, Riedel said: “Look, I’ll make it easy for you.” He then described the route he planned to take into Colorado, asking the agents to stay “at least 100 yards behind me on the highway” to avoid a collision in the event he had a flat tire.

Until the black Ford was succeeded by another vehicle occupied by two Kansas City agents in Hannibal, Mo., the travelers enjoyed a strange camaraderie. According to Riedel, on one occasion he pulled over to wait for his pursuers when they got lost in traffic and, on another occasion, the agents notified him that he had missed a turn.

Three miles east of Bucklin, Mo., the Riedels had car trouble and hitchhiked to Dail Motor Co., a Ford dealer in nearby Marceline.. The Lincoln was towed there for repairs. After waiting five hours, Riedel traded the Zephyr for a blue 1940 Ford Coupe.

The Riedels played musical chairs with the FBI for the rest of their honeymoon. Two vehicles assumed the chase at the Colorado state line. At each stop the Riedels took moving pictures of both autos.

Declassified documents affirm that neither Peter nor Helen made any telephone calls or tried to send messages. Moreover, Riedel consistently registered under his correct name. Except on the rare occasions when the agents’ behavior was deemed intrusive, the Riedels made a game of their predicament.

On their return from the Grand Canyon, Peter caught a flight from St. Louis to Washington while Helen drove their car to Terre Haute to spend a few additional days with her family.

The Riedels were visiting Mellon Art Gallery in Washington, D.C., on Dec. 7, 1941, when they learned Japan had bombed Pearl Harbor. Two days later, Hitler declared war on the U.S. For the next 10 days, the FBI again trailed the Riedels. An agent even moved into an apartment next to theirs.

On Dec. 19, 1941, Riedel and other members of the German diplomatic corps were transported by rail to the fashionable Greenbriar Hotel at White Sulphur Springs, W.Va., Helen joined him three days later.

Until May 7, 1942 — nearly five months — the Riedels, other German diplomats and, eventually, diplomats from Italy, Hungary and Bulgaria, enjoyed the amenities of one of America’s finest luxury resorts. Meanwhile, Peter continued to monitor newspaper reports of escalating U.S. military aircraft production.

When the time came for Peter to be transported back to Germany, Helen was given the choice of going her own way. From all accounts, on the several instances she was given the opportunity to voluntarily leave him, she refused to consider it.

The Riedels arrived in Frankfurt on Main, Germany, on May 25. Peter had little success convincing the German Air Ministry that the U.S. soon would be producing vast quantities of military aircraft. And he had a difficult time securing suitable employment. Finally, he earned the confidence of aircraft designer and manufacturer Ernst Heinkel, who employed Riedel in November 1942 as an engineer. The Riedels lived in Rostock and then in Oranienburg.

When the German government decreed in April 1943 that women under 40 without small children had to be employed in an armaments industry, Heinkel agreed to hire Helen as a draftsman. The master’s degree she earned in Fine Arts from Columbia University could be put to use if she took a short course in technical draftsmanship.

The mandatory medical examination did not appear to be an obstacle. The Riedels were shocked when Helen was diagnosed with tuberculosis in both lungs. Though she was promptly placed in a German sanatorium, Peter wanted to get her into a facility in Switzerland, where physicians were less concerned about getting patients back to work. Eventually, Helen was allowed to enter a sanatorium at Davos, site of an elite ski resort and water sports center, if Peter would go to work for the German intelligence organ Abwehr in Sweden. His visits with Helen became infrequent and he was forced to seek financial assistance from his brother-in-law, a Swiss architect, to pay medical bills.

Receiving superior medical care at Davos, Helen began making glove puppets, a talent she perfected while teaching. She also began painting again. Her view of Davos Lake amid the Swiss Alps was spectacular and her work captured the splendor.

As Helen’s health improved, Peter’s problems escalated. Adm. Wilhelm Canaris, head of the Abwehr, was among those suspected of plotting to assassinate Adolf Hitler. ...
Posted by Alex Constantine at 1:53 PM