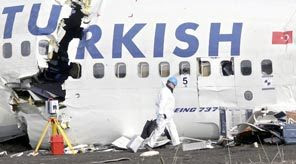 " ... All four worked for Boeing's defense division on the Turkish 'Peace Eagle' program, the company said. ... "

Investigators examine the wreckage of the Turkish Airlines Boeing 737-800 that crashed near Amsterdam on Wednesday morning. The crash killed nine; at least two of the dead were Boeing employees, four of whom were aboard.

The company is waiting for notification from the State Department about the condition of a fourth Boeing employee, the company says on its Web site.

Boeing spokesman Jim Proulx on Wednesday identified the four Boeing employees as Michael Hemmer, Ronald Richey, John Salman and Ricky Wilson. The company on Thursday declined to say which two of the four were killed or who was injured, citing the families' wishes.

The four men were aboard Turkish Airlines Flight 1951 that slammed into a muddy field Wednesday morning, two miles from the runway at Amsterdam's Schiphol Airport. Authorities in the Netherlands said nine — five Turks and four Americans — of the 135 people aboard the Boeing 737-800 died.

"This is a very sad day for our company," Jim McNerney, Boeing chief executive officer, said on the company Web site. "Our thoughts and prayers are with our colleagues' families, friends and co-workers and with the families of everyone who was on the flight." 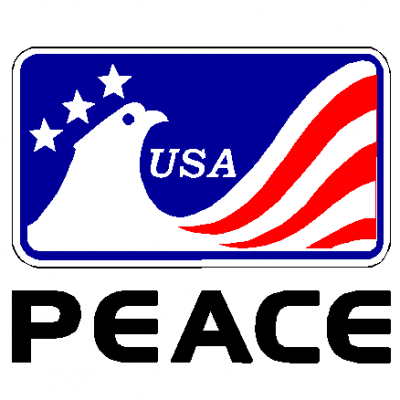 All the Boeing employees on the plane were based in the Puget Sound area and were traveling on Boeing business. All four worked for Boeing's defense division on the Turkish "Peace Eagle" program, the company said.

A woman who identified herself as a family friend answered the phone at the Hemmer residence in Federal Way earlier Thursday. While she was unsure of Hemmer's status, she said the family assumes he survived the crash. Hemmer's wife and brother were on the way to Amsterdam, said the woman, who declined to give her name.

She said she and another family friend are caring for the Hemmers' children.

There was no answer at the homes of Salman, Richey or Wilson.

In Amsterdam, meanwhile, the head of the agency investigating the accident said engine trouble may have caused the crash.

Chief investigator Pieter van Vollenhoven said, in remarks quoted by Dutch state television NOS, that the Boeing 737-800 had fallen almost directly from the sky, which pointed toward the plane's engines having stopped. He said a reason for that had not been established.

Spokeswoman Sandra Groenendal of the Dutch Safety Authority added that engine failure was still only "one of the possible scenarios" for the crash.

Van Vollenhoven said a preliminary finding would not be made until an analysis of the plane's flight-data recorders in Paris could be completed.

Survivors said engine noise seemed to stop suddenly; the plane shuddered and then fell out of the sky tail-first. Witnesses on the ground said the plane dropped from about 300 feet.

Haarlemmermeer Mayor Theo Weterings said the names of the victims would not be released until the bodies had been formally identified.

At the crash site Thursday, investigators took detailed photos, trying to piece together why the plane lost speed and crashed.

One survivor, Henk Heijloo, said the last message he heard from the captain was for the flight crew to take their seats. He said it took him time to realize the landing had gone wrong.

"We were coming in at an odd angle, and I felt the pilot give the plane more gas," he said. He said he thought the pilot might have been trying to abort the landing, because the nose came up.

He then realized the landing was too rough to be normal, and he felt an enormous crash a moment later.

He walked away apparently uninjured, but his body began aching Thursday, he said.

Turkish officials said the plane was built in 2002.

Turkish Airlines officials issued a statement Thursday denying reports that the plane had had technical problems in the days before the accident.

It confirmed that the plane had undergone routine maintenance Feb. 19 and that it had to delay a flight Monday to replace a faulty caution light.

A retired pilot who listened to a radio exchange between air traffic controllers and the crew shortly before the crash said he didn't hear anything unusual.

"Everything appeared normal," said Joe Mazzone, a former Delta Air Lines captain. "They were given clearance to descend to 7,000 feet."

The recording was posted by the Web site LiveATC.net.

"Turkish 1951 descending from level 7-0," one of the pilots said as they neared the airport, referring to the plane's altitude of 7,000 feet.

The controller cleared the plane to descend to 4,000 feet, where it would intercept an electronic beam guiding the plane to the runway.

The controller then read out the proper radio frequency for requesting clearance to land. "Turkish 1951 contact the tower 11827, bye bye," he said

"Thank you, sir," the pilot said. There was no indication of trouble in his voice.

Weather at the airport at the time was cloudy with a slight drizzle.

Boeing's 737, built at the company's plant in Renton, is the world's best-selling commercial jet, with more than 6,000 orders since the model was launched in 1965.