EXHIBITION REVIEW: 'STATE OF DECEPTION: THE POWER OF NAZI PROPAGANDA' 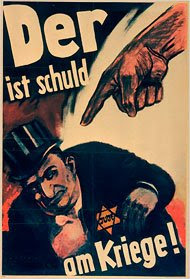 WASHINGTON — The most haunting image in “State of Deception: The Power of Nazi Propaganda,” a major new exhibition at the United States Holocaust Memorial Museum here, may be the first one you see after the introductory videos. At the end of a darkened corridor is a black-and-white photograph on a black background. Underneath, with unornamented simplicity, is a single word: Hitler.

It is a campaign poster from 1932, when the Nazi Party was already the second largest in the German Parliament. The mass rallies, the storm troopers, the frenzied rhetoric of this electrifying speaker: all are condensed into this silent face, which is deliberately unsettling, starkly divided into light and shade, mixing comfort with ferocity, transparency with subterranean energies.

It is chilling because we know what that face unleashed, and as we make our way through the exhibition, we feel almost physically assailed. A muscular fist smashes into the face of a cringing, sweating Jew (1928). An enormous Hitler is superimposed on a crowd of ecstatic Germans raising hands in salute as red gothic letters shout, “Ja!” (1934).

These images verge on kitsch but have too much force to be easily dismissed. Some are as graphically brilliant as the Nazi flag Hitler designed, its blood red background surrounding a white circle stamped with the swastika scar. That jagged black cross is almost never in repose; it pivots on the point of an extended arm, its shape cutting through space, as if caught in circular motion, a fearsome revolutionary weapon.

The exhibition mounts some of these posters as they might have been seen at the time, plastered on walls. Beside them campaign images attacking the Nazis in 1932 — democracy’s last gasp — seem hopelessly understated, even one from the Social Democratic Party that shows a skeleton with a Nazi cap and bloody hands. “Nein!” the poster futilely shouts.

As the show, organized by Steven Luckert, winds its way from the beginnings of Nazism in the aftershocks of the First World War to the Allied attempt to eradicate Nazi propaganda after the Second, the effect is overwhelming. Conceptually everything is familiar: the foundering Weimar Republic, the celebrations of Aryan virility, the Jew as embodiment of evil, the mass rallies, the death camps, the defeat. But the effect is not in the facts but in the images and artifacts, many of which have been lent by institutions in Europe for this show. 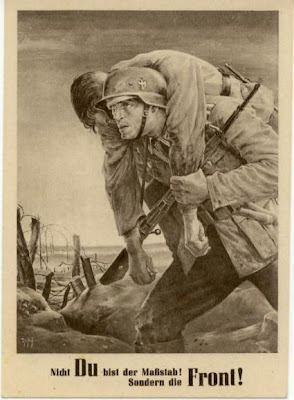 And if this is how powerfully these images affect an early-21st-century viewer who would have been a prospective victim, imagine the power they had on believers, flattering their highest vision of themselves while reminding them that endangering this imminent utopia was the conniving Jew, known from the Protocols of the Elders of Zion. In one 1943 poster a giant hand points accusingly at a corpulent caricature wearing a yellow star, “Jude”: “He is to blame for the war!” This, of course, while Jews were being carried off on trains heading east to feed the crematoriums.

The impact of these images is prerational or antirational; they short-circuit argument. To suggest that perhaps this caricatured figure was not to blame for the war would be like insisting on an alternate universe. The accusation could be rejected only if everything were rejected. Exorcism and murder were not a policy; they were a responsibility. They all flowed out of these posters and their associated beliefs.

And once accepted they are tirelessly applied. A children’s game here, “Juden Raus!” (“Jews Out!”), has a playing board that is a perverted version of Candyland. Its pictured resting places are retail stores labeled Gorstein, Cohn or Stern. Succeed in chasing out six Jews, the board affirms, and you win.

At the exhibition too are pages from the most fervent Nazi publication, Der Stürmer, helpfully translated. One advertisement shows a label that must have been the Nazi equivalent of a Good Housekeeping seal: “This emblem on clothing protects you from unwittingly buying Jewish products!”

But however medieval the vision, the methods were contemporary. On display is the Volksempfänger, the People’s Receiver: an inexpensive radio powerful enough to bring Hitler’s voice to millions of Germans, yet weak enough so few signals could be received from other countries.

The people’s radio helped ensure a closed world in which the Nazi vision could unfold without challenge. Propaganda, as Hitler noted in “Mein Kampf,” “is a truly terrible weapon in the hands of an expert.”

The exhibition should have included more on how Nazi propaganda was used on an international scale to lull the democratic West into acceding to Hitler’s expansionism, and how it portrayed Germany’s triumphs and defeats. But the show’s major flaw is that it can’t quite settle on what to make of propaganda itself. Surely we don’t need the Nazi example to teach us that propaganda “omits information selectively,” “simplifies complex issues” and “plays on emotions.” That is also true of advertising and much political advocacy.

And while it is necessary to understand the historical context, as this exhibition does, how far can such insight go? The narrative begins with Allied propaganda during World War I, which caricatured the “Hun” as a fearsome brute. Hitler wrote: “There was no end to what could be learned from the enemy by a man who kept his eyes open.” If the Allies could make up stories about German war atrocities, why shouldn’t the Nazis use that strategy against the Jews?

But the situations are less comparable than they seem. German atrocities during World War I were exaggerated, but historians do not regard them all as delusions. Nazi propaganda was something different in kind, not just degree. It created a world that had no foundation except in myth, even attributing the Nazi desire for extermination of the Other to the Other. Nazis accused the Jews of having a secret plan to exterminate the Germans and, as evidence, cited a crank vanity publication by a New Jersey salesman.

The show ends with an account of the Nuremberg trials in which Julius Streicher, the founder and editor of Der Stürmer, was convicted and executed for being a propagandist, setting a precedent for prosecuting for “incitement to genocide.” The exhibition points out that in 2003 that charge was used to convict the publisher of a tabloid and the owner of a radio station in Rwanda. It also notes that some have suggested the charge be brought against the Iranian president Mahmoud Ahmadinejad for declaring that Israel “must be wiped off the map.”

The museum is developing a curriculum based on the show that will probe the notion of propaganda and examine contemporary implications. But here the slope becomes slippery. How much does the Nazi manipulation of media reveal about propaganda’s misuse in democratic societies? Does the extreme example shed light on the commonplace, without the dangers of the extreme being lessened, the dangers of the commonplace amplified?

Such analogies risk slighting what was so powerful about Nazi propaganda: It didn’t just distort reality to make an argument; it reshaped it. It tapped into mythic beliefs about Jews being genocidal and inhuman, thus spurring retaliation. Is anything rhetorically comparable today?

Perhaps. The exhibition points out that the Nazis financed anti-Semitic broadcasts by Haj Amin al-Husseini, “an Arab nationalist and prominent Muslim religious leader.” Now no sponsorship seems needed. Major Middle East media outlets have asserted that Jews use children’s blood to bake matzos. In recent weeks we have heard that Jews are following the nefarious plot outlined in the Protocols to exterminate all gentiles, this from the poet and former member of the Lebanese Parliament Ghassan Matar. An Egyptian cleric, Safwat Higazi, has described Jews being “as smooth as a viper”: “Dispatch those son of apes and pigs to the Hellfire.”

And an Egyptian cleric with strong ties to the West, Sheikh Yusuf al-Qaradhawi, has described Jews as “a profligate, cunning arrogant band of people”: “Oh Allah, count their numbers, and kill them, down to the very last one.”

The extent of these visions (chronicled by the Middle East Media Research Institute), the historical distortions they codify and the readiness with which they are taught to children and are secularized into political action suggest that the strongest contemporary analogy to Nazi propaganda may be one the exhibition leaves unmentioned.