THE CANONIZATION OF KATHARINE GRAHAM 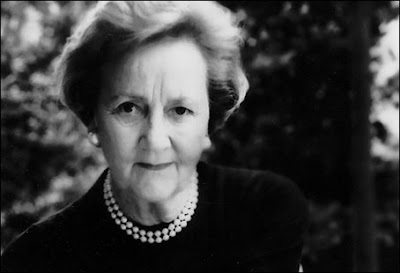 " ... A number of Post editors and reporters, including Mrs. Graham's own choice for Managing Editor, Ben Bradlee, and Bob Woodward, came out of CIA or intelligence backgrounds. ... "

IN A SIGN that the Washington Post's ability to misconstrue events will not die with its leader, the paper gave state funeral status to the passing of former publisher Katharine Graham.

This was more than a simple act of commercial self-aggrandizement; it marked a milestone in corporatism, expanding the task of the consumer from mere purchase of products to a required reverence for their makers on a level previous reserved for heroes and royalty. On three successive days the Post actually printed a map of the funeral procession route, local TV stations gave the ceremony live coverage, the police blocked streets, and the holiest temple of Episcopalianism, the National Cathedral, pulled out all the stops.

Lost in all this were a few basic facts. The most celebrated events in Mrs. Graham's journalistic career -- Watergate and the Pentagon Papers -- occurred more than 25 years ago and, while honorable, were anomalies rather than typical. More realistic indicators can be found in the names on the funeral speaker and honored guest list, most remarkably -- given all the Pentagon Paper iconography -- those of Robert McNamara and Henry Kissinger, two of America's major practitioners of violence during Mrs. Graham's reign.

Facts that belong in the Graham story, but which have been consistently excised, include:

• In 1979 Katherine Graham and her managing editor managed to suppress the first printing of Katharine the Great by Deborah Davis. The publisher actually shredded 20,000 copies. Davis sued, eventually won, and the book finally came out.

• Graham, in a 1988 speech to senior CIA employees, said: "There are some things the general public does not need to know and shouldn't. I believe democracy flourishes when the government can take legitimate steps to keep its secrets and when the press can decide whether to print what it knows."

• Norman Solomon has written, "Graham was a key player in the June 1971 battle over the Pentagon Papers. But such journalistic fortitude came late in the Vietnam War. During most of the bloodshed, the Post gave consistent editorial boosts to the war and routinely regurgitated propaganda in the guise of objective reporting. Graham's [memoirs] never comes close to acknowledging that her newspaper mainly functioned as a helpmate to the war-makers in the White House, State Department and Pentagon."

• Lest you think we're just talking old history, here is what Matthew Rothschild of the Progressive wrote last year: "In commemorating the twenty-fifth anniversary of the fall of Saigon on April 30, many leaders of the mainstream media pulled out all the stops to cast the U.S. role in a flattering light. The notable exception was The New York Times, which blamed President Johnson for the "reckless spilling of American and Vietnamese blood." . . . The Washington Post, by contrast, rallied around the flag. Its editorial on April 30 said, "For the sake of the 58,000 Americans who lost their lives in Vietnam, it is important to recall the large and just cause for which they made their sacrifice." The Post also expressed relief that "the Gulf War cured the armed forces of the debilitating Vietnam syndrome." To reinforce its position, the Post ran an op-ed the same day by Senator Bob Kerrey, Democrat of Nebraska, who received the Medal of Honor for service in Vietnam. Kerrey wrote, "We were fighting on the right side. . . . The cause was just and the sacrifice not in vain." The reason the United States lost, he said, was: "We succumbed to fatigue and self-doubt." Next to Kerrey's commentary, the Post ran five accounts from Vietnamese Americans, every one of them bemoaning the U.S. departure. At least four of the five were South Vietnamese military officers or their relatives . . . Nowhere in The Washington Post was there a hint of another Vietnamese perspective, or another U.S. perspective, for that matter. Newsweek, owned by the Washington Post Company, was equally lopsided in its coverage. The May 1 issue had two long articles on Vietnam. The first was by Evan Thomas entitled "The Last Days of Saigon." The piece was all but bereft of analysis except that Vietnam was "at once a noble cause and a tragic waste," and "a low moment in the American Century, a painful reminder of the limits of power." The other article was by -- I'm not kidding you here -- Henry Kissinger! Akin to having Goering write about the blitzkrieg, Newsweek let Kissinger (he of the secret wars in Laos and Cambodia, he of the mining of Hanoi's harbors, he of the "madman" theory of diplomacy) retouch his own portrait even as he smeared the protesters once more.

Another point that Solomon has summarized well: "The autobiography has little use for people beyond Graham's dazzling peers. Even activists who made history are mere walk-ons. In her book, the name of Martin Luther King Jr. was not worth mentioning. For a book so widely touted as a feminist parable, "Personal History" is notably bereft of solidarity for women without affluence or white skin. They barely seem to exist in the great media executive's range of vision."

Robert Parry -- a Washington correspondent for Newsweek during the late 1980s -- told Solomon: "On one occasion in 1987, I was told that my story about the CIA funneling anti-Sandinista money through Nicaragua's Catholic Church had been watered down because the story needed to be run past Mrs. Graham, and Henry Kissinger was her house guest that weekend. Apparently, there was fear among the top editors that the story as written might cause some consternation." (Former CIA director Robert Gates subsequently confirmed Parry's story in his memoirs.)

In the 1950s, Graham's husband, Philip, played an important role in Operation Mockingbird, a major and remarkably successful effort by the CIA to co-opt journalists. Some 25 major news organizations and 400 journalists were seconded by the agency for its purposes during this period, as admitted by the CIA itself during the Church committee hearings. As one agency operative put it, "You could get a journalist cheaper than a good call girl, for a couple hundred dollars a month." A number of Post editors and reporters, including Mrs. Graham's own choice for Managing Editor, Ben Bradlee, and Bob Woodward, came out of CIA or intelligence backgrounds. Mrs. Graham continued the paper's close relationship with the agency.

The Washington Post joined in the vicious attack on reporter Gary Webb, who dared to reveal aspects of the relationship between the CIA and the drug trade.

Typical nasties came from Howard Kurtz: "Oliver Stone, check your voice mail." And from Mary McGrory: "The San Jose story has been discredited by major publications, including the Post." And why? Well, in part because the Post and other papers simply took the CIA's word. Wrote Marc Cooper in the LA New Times: "Regarding the all-important question of how much responsibility the CIA had, we are being asked to take the word of sources who in a more objective account would be considered suspects."

In crushing the pressmen's strike, Mrs. Graham not only broke the back of unions at the Washington Post but set an example that would be followed by other media throughout America. The journalistic labor movement never recovered.

Mrs. Graham, like her husband, believed firmly in a political aristocracy. Other publishers before them had felt the same way but mercifully the nation's media was diffuse enough that they could not have the full power of their prejudices. By the time Mrs. Graham took charge, however, that was changing. As Ben Bagdikian wrote in 1990 in The Media Monopoly, "At the end of World War II, 80 percent of the daily newspapers in the U.S. were independently owned, but by 1989 the proportion was reversed, with 80 percent owned by corporate chains. In 1981 twenty corporations controlled most of the business of the country's 11,000 magazines, but only seven years later that number had shrunk to three corporations. Today, despite the more than 25,000 outlets in the U.S., 23 corporations control most of the business in daily newspapers, magazines, television, books, and motion pictures . . . An alarming pattern emerges. On one side is information limited by each individual's own experience and effort; on the other, the unseen affairs of the community, the nation, and the world, information needed by the individual to prevent political powerlessness. What connects the two are the mass media, and that system is being reduced to a small number of closed circuits."

The Graham years also saw another profound change. As Bagdikian noted in his memoirs, only after the World War did the Labor Department state, in its annual summary of job possibilities in journalism, that a college degree is "sometimes preferred." As late as the 1950s, over half the journalists in the country lacked higher degree. Under the guidance of papers like the Post, however, reporters would become part of the elite. In the precedent-setting Style section and elsewhere, journalists lost their connection with the readers and became part of the ruling class. American journalism would never be the same.

These two factors -- media monopolization and the desertion of readers by journalists -- helped speed such grim developments as growing repression and decline of democracy in the U.S., as well as the corporate takeover of politics domestically and of national sovereignty internationally.

Peter Dale Scott wrote in Tikkun Magazine: "In 1989 a subcommittee chaired by Senator John Kerry published a report documenting that the U.S. government had contracted with known drug traffickers to supply the Contras. This important finding was minimized in the dismissive news stories published by the Post and the Times, while Newsweek, owned by the Post, wrote off Kerry as a "randy conspiracy buff."

This style of ex cathedra put-downs of any critics of the system would become a hallmark of Post political coverage.

Under Philip Graham, the Post established a local version of the Trilateral Commission -- the Federal City Council -- a business-centered body devoid of political legitimacy but overflowing with political power. This body became a major weapon in Mrs. Graham's efforts to control the city, which included such horrors as relentless advocating a LA type freeway system and fighting self-government as long as possible.

Finally, as the years went on, the Post became less and less interesting. It became, as Samuel Johnson once said of an important person of his era, not only dull "but the cause of dullness in others."

In short, a good journalist once would have at least described the late Mrs. Graham as "controversial." The fact that hardly any even thought of the word is a testament to how powerful she and her paper truly became and how little anyone else has to say about it anymore.

http://www.ratical.org/ratville/JFK/JohnJudge/PentaPap.htm
Posted by Alex Constantine at 11:19 AM