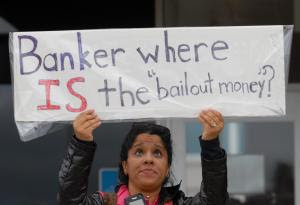 NEW YORK -- New York Attorney General Andrew Cuomo said late Tuesday that Merrill Lynch & Co. moved up its bonus payments to executives to assure they were secured before the firm's more than $15 billion of fourth-quarter losses was reported. In a letter to Chairman Barney Frank of the House Committee on Financial Services, Cuomo said he had asked Merrill in October to detail their bonus plan. He said Merrill responded in November, saying that any bonuses would be based on performance and retention needs, and provided no him no further details. "Rather, in a surprising fit of corporate irresponsibility, it appears that, instead of disclosing their bonus plans in a transparent way as requested by my office, Merrill Lynch secretly moved up the planned date to allocate bonuses and then richly rewarded their failed executives," Cuomo wrote Frank.