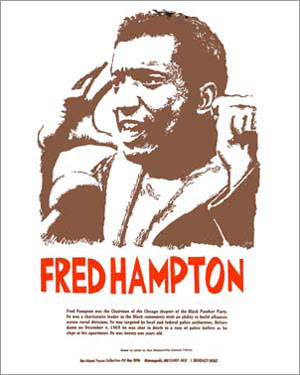 February is Black History Month and Fred Hampton definitely holds a place in history. Fred Hampton was a political activist born August 30, 1948. In Junior college he became active in the civil rights movement. Hampton eventually met Huey P. Newton and started his own chapter for the Black Panther Party in 1968. Fred Hampton was the chairman of the Chicago Black Panther Party and set up the free breakfast for children program in Chicago. Fred Hampton fought for racial and economical equality. Hampton also spoke out about police corruption and brutality.

When the Weather Underground called for the four “Days of Rage” in Chicago, Fred Hampton condemned the idea. Fred Hampton did not advocate unnecessary violence where people were unjustly targeted. In Fred Hampton’s speech at Olivet church in 1969 titled “Power Anywhere Where There’s People” he said, “As a matter of fact, even though you have on a uniform it doesn't make me any difference. Because I don’t care if you got on nine uniforms, and 100 badges. When you step outside the realm of legality and into the realm of illegality, then I feel that you should be arrested."

On the FBI’s official website it states that, “Fred Hampton, age 21, was allegedly shot and killed by the Cook County State Attorneys Police, Chicago, Illinois, on December 4, 1969, when the police conducted a raid on the Black Panther Party (BPP) Headquarters located at 2337 West Monroe Street, Chicago, Illinois.” Fred Hampton was shot and killed and the police claimed that they were firing in self defense because he was armed and approaching them. People from the neighborhood and other Black Panther Party members stated that he was shot in his bed because that is where the blood stains were. To prove their point they held public walk through tours of Hampton’s home, hours after the shooting.

During my brief interview with Roz Payne this is what she had to say:

“While I was reading and making a computerized index to the FBI COINTELPRO Chicago files on Fred Hampton and the Chicago Black Panther Party I found an entry by a FBI agent that said, ‘An informer William O'Neil had added sleeping medicine into the kool-aid that Fred would drink each night. So that he would be passed out when the police attacked the house where Fred and others were sleeping.’ William O' Neil did the deed.

The police lied about the bullet holes in the house, trying to say that Fred with other Panthers had shot out of the house to try to kill the police and it took a very smart brave newspaper reporter to see that all the bullet holes showed the entry of the bullets all came from the outside into the house. O'Neil was given a $300.00 bonus for his deed.

He later took his life by jumping off an overpass.

http://www.examiner.com/x-3032-Denver-Progressive-Examiner~y2009m2d10-The-truth-about-Fred-Hamptons-murder
Posted by Alex Constantine at 10:54 AM