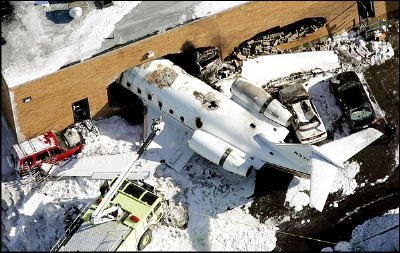 For details of the crash, and information on central CIA-linked culprits involved, ties to 9/11, Gitmo torture, political assassination, etc., see: "The Lexington Comair Crash - Part 2: The Teterboro Incident" (continued through part five of the Lexington crash series, posted in 2006; part one features essential, related political and intelligence connections, including ties to Mohammed Atta, Wally Hilliard and a slue of CIA-Mafia crimes).

I was on to the parapolitical aspects of this crash three years ago. Some researchers are just now waking up to it. Anyone who claims an "exclusive" or "scoop" on coverage of CIA ties to the Teterboro crash - a few years too late - is talking through his hat. "I told you so" is my mantra - the "news of the future" is found right here.

This week, it’s the luxury corporate jet executives’ turn. Five company officials and a pilot associated with a luxury charter jet company that operated a flight from Teterboro, New Jersey Airport which crashed on takeoff in 2005 were named in a 23-count indictment charging a series of crimes, including endangering the safety of aircraft.

The indicted was unsealed and the defendants were arrested this morning.

Charged in the indictment were the following individuals associated with the now defunct Platinum Jet Management of Ft. Lauderdale, Florida.:

• his brother, Paul Brassington, 29, a Vice President and co-founder of Platinum Jet;

• Andre Budhan, 42, a managing member and co-founder of Platinum Jet;

• Joseph Singh, 37, the director of charters for the company; and

Michael and Paul Brassington, Budhan and McKenzie were arrested this morning in Ft. Lauderdale. Arrest warrants have been issued for Vieira and Singh and they are being sought.

Federal officials in New Jersey allege a conspiracy to commit continuous willful violations of regulatory requirements for the operation of commercial charter aircraft. The indictment accuses the defendants of routinely undertaking and concealing dangerous fueling and weight distribution practices which existed on the Platinum-operated jet that failed to lift off at Teterboro on February 2, 2005.

The jet left the end of the runway, crossed Route 46, hitting cars along the way, and slammed through the side of a clothing warehouse. The Teterboro flight that crashed on Feb. 2, 2005, was over-fueled in a manner that caused the plane’s center of gravity to exceed its forward weight limit for takeoff, contributing to the crash. The fueling practice was commonly used, according to the indictment, to increase profits for Platinum Jet.

“The fuel loading was the primary contributing factor in the crash,” said U.S. Attorney Ralph Marra said. “It is astounding – and criminal – that owners and operators of jet aircraft would repeatedly engage in such a dangerous game with passengers and airplanes loaded to the brim with jet fuel. What this indictment alleges is an anything-goes attitude by the defendants to get their planes in the air and maximize profits without regard to passenger safety or compliance with basic regulations.” 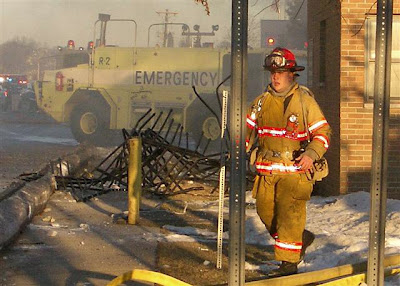 Michael Brassington was charged with endangering the safety of aircraft and alleges that all of the defendants joined a conspiracy to defraud charter flight customers, jet charter brokers and the Federal Aviation Administration (FAA) through interstate wire communications, and to defraud the United States by impeding and obstructing the FAA’s regulation of commercial aircraft in the United States.

The defendants operated Platinum Jet as an on-demand commercial jet charter company without having a “Part 135 certificate,” which is required by federal aviation regulations for charter operations and is granted only after a rigorous application process, which required operators, among other things, to develop comprehensive operating, training and maintenance manuals that would govern their charter operations.

During this period, the conspirators lied in contractual documents faxed from state to state to charter brokers about Platinum Jet’s illegal regulatory and safety status.

The defendants operated more than 85 commercial flights during this period in violation of federal safety regulations for more than $1 million in compensation.

Federal officials alleged that in November 2003, the defendants started sharing a Part 135 certificate, or “piggybacking,” with a Part 135 certificate holder based in Alabama, and that after they did so, they continued to violate FAA rules by dispatching unqualified pilots and pilots without the FAA-required amount of rest to fly chartered flights.

To conceal this illegality, the indictment alleges, Michael Brassington, Vieira and other Platinum Jet pilots signed FAA mandated flight logs for more than 30 charter-brokered flights falsely indicating that those charters were private, non-profit flights, which are subject to less onerous regulation than commercial flights.

This alleged conduct lasted from November 2003 until shortly after the crash at Teterboro Airport in February 2005.

During this period, Michael and Paul Brassington, Budhan and Singh continued to claim in interstate contracts with the brokers that Platinum Jet was in compliance with federal safety regulations.

The indictment alleges a dangerous and fraudulent “tankering” scheme, where the defendants – in order to cut costs and take advantage of less expensive fuel contracts at locations including Teterboro – would over-fuel aircraft to an extent where those aircrafts’ centers-of-gravity were too far forward for safe takeoff.

The defendants would then falsify FAA-required weight-and-balance graphs to conceal the tankering and dangerous weight configuration.

Federal officials alleged that Michael Brassington and Vieira doctored numerous weight-and-balance graphs to conceal excess front-loaded weight before takeoff and instructed other pilots to do the same. Also, McKenzie is alleged to have lied to a Platinum Jet pilot about the weight of one of the aircraft in order to keep the scheme going.

Platinum Jet flew more than 25 commercial charter flights on two separate aircraft with centers of gravity that exceeded the aircrafts’ forward limits, and lied about it in FAA-required documents.

It was this dangerous tankering that was the primary contributing factor in the Teterboro crash.

In November 2004, Michael Brassington told a first officer with Platinum Jet that one of the aircraft, Jet N370V, weighed considerably less than the weight reflected on FAA-required weight-and-balance graphs located on that aircraft.

In reliance on this representation from Michael Brassington, the first officer over-fueled Jet N370V on the day of the crash and caused its center-of-gravity to exceed its forward limit for takeoff and endangered the aircraft.

http://www.corporatecrimereporter.com/luxuryjet020409.htm
Posted by Alex Constantine at 11:49 AM