Consistency is the last refuge of the unimaginative, and all, but this story is a bit too inconsistent (and "imaginative") for impulsive swallowing ... 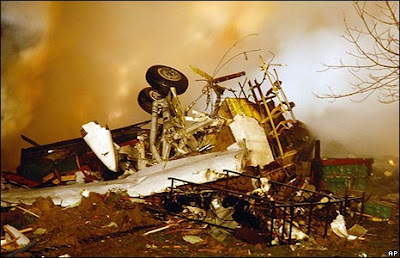 It is a reporter's notes, IMhO. Obvious questions are left dangling after every period:

• Why didn't the police obtain a warrant before entering John's home and frantically searching for the video camera?

• The police claimed that John was on a nearby roof beyond the police perimeter, allegedly accompanied by a 13-year-old boy, taping the police response to the crash, as was his right. Officials claimed that he shouldn't have been on the roof with a minor. All right. Was this such a deplorable "crime" that they went ballistic, launched into an illegal search for the tape (not the boy) - to "prove" the kid had been on the roof? Did it occur to these highly-trained law enforcement professionals that an illegally-obtained video tape is inadmissable as evidence - the very reason given for confiscating John's camera in the first place?

• What will the state's financial liability be when the lawsuit is settled (in a time of budgetary crisis)?

• Consideration for the families of the deceased was given as the reason for altering the video tape - very compassionate - but by this reasoning, police could have confiscated and edited the video of the Rodney King beating to "protect his right to privacy." Even if this rationale explains it, altering the tape is a serious civil rights violation.

Did the police have ulterior motives for scrambling after the video camera, Delta Force-style? ...

CLARENCE, N.Y. (WIVB) - Authorities are reminding the community to show respect for the investigation of the crash, and the privacy of the grieving families.

John said, "We've been up there every day since it happened."

But Monday was different, when John from Clarence was on the roof of his apartment building with a video camera at the time the grieving families came to the crash scene, the State Police helicopter spotted him.

John said, "At that point there was troopers from all over the building saying 'look up there, look at the building,' started walking toward the building, they said 'there he is get him,' making threats like 'get down from the building.'"

Then police came to his door...

"He started rifling the luggage thinking we took luggage from the crash site which is ludicrous."

"And then they took the camera and said 'We're confiscating the camera, my captain wants to see it, and we'll see what happens from there.'"

State Police have been dilligent about protecting the privacy of the families, but they say the reason they moved in on John was because they noticed a 13-year-old boy with him on the roof.

New York State Police Captain Steve Nigrelli said, "They admitted to videotaping but they wouldn't indicate who was on the roof. At that point, we started looking at this from a child endangerment standpoint. I would have some concerns if a 13-year-old child was allowed to be on the roof. How did he get on the roof?"

State Police say they reviewed the tape and found no proof that a minor was on the roof, and Tuesday, a day later, they returned the tape.

It had images of the crash scene but not the grieving the families.

John's apartment is technically outside of the permimeter, but even if it was inside, civil rights attorney David Jay says he had a right to videotape.

Jay said, "Police meant to do well, but in the process did things they shouldn't have done..."

"When terrible events occur, even officers can make mistakes."

David Jay, and State Police and the FBI all agree that if you're standing where you're allowed to be, you are allowed to videotape whatever you see.