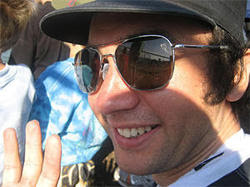 (02-26) 17:38 PST SAN FRANCISCO -- An unusual French investigation into the death of a French national in San Francisco concluded that the man was stabbed in a surprise attack outside his apartment and could not have committed suicide, as local authorities once suggested, the man's father said Thursday.

The initial police investigation was inconclusive and the medical examiner - who makes the official determination - was unable to decide whether someone killed de la Plaza or he killed himself. The stab wounds could have been self-inflicted, an autopsy report said.

De la Plaza's family and friends have rejected any possibility that he committed suicide, pointing out that no bloody knife was found in the apartment. They also said de la Plaza, a sound engineer planning to move to Argentina, never indicated he intended to kill himself.

They began what became an international campaign to prove he had been slain. As part of it, they persuaded the French government to probe the death of de la Plaza, who held dual French and U.S. citizenship.

De la Plaza's father, Francois de la Plaza, speaking through a translator, said at a press conference Thursday on the steps of San Francisco City Hall that French forensic experts had concluded that the stabbing must have happened outside the apartment on Linden Street.

He said that was based on the amount of blood found at the scene. San Francisco police have said security cameras located near the building did not record an attack, but that the cameras also did not provide full, constant coverage.

The French investigators, whose report has not been made public, determined that de la Plaza could not have stabbed himself based on "the way the knife entered," his father said. He was stabbed three times, once in the abdomen, once in the chest and once in the neck.

"Based on the angle of entrance, he could not have done it himself," the father said of the abdominal wound. "No knife was ever found. For them, it was rather obvious."

Francois de la Plaza said the forensic experts told him that a bruise on his son's forearm was suffered as he tried to ward off his killer.

After being fatally stabbed, the father said, de la Plaza closed the door behind his attacker and locked it. He said the French probe concluded that the stab wounds would have brought on shock and then an almost immediate coma, which would explain why his son did not call 911.

He said San Francisco police had told him soon after his son died that they were split on whether it was a homicide or suicide.

Inspector Antonio Casillas told him something "very surprising," he said. "He said, 'Until I see the person who confesses to this crime, I will rule this is a suicide.' "

But, he said, he and French officials met with police Wednesday, and they assured him that they are pushing forward with the case as a homicide. He credited international media attention with pressuring police and said, "We trust the San Francisco Police Department will do its job."

He said he found it "appalling" that it had taken French action for police in "one of the richest countries in the world, and one of the riches cities in that country," to investigate the case properly.

The family is offering a $100,000 reward in the case, to be paid out of de la Plaza's life insurance money.

It added that Casillas and the other investigator on the case, Tom Walsh, "have been unable to respond to the French findings because we as yet have not been afforded the opportunity to review those findings."

On Thursday, police insisted there had been no change in their handling of the case from the beginning.

"This is still an undetermined death," said Lt. Mike Stasko, head of the homicide detail. "It is being investigated as if it were a homicide."

He added, "As soon as we get the (French) report, we are going to sit down with everybody involved. We are going to balance it with everything they have and see if there is something we don't have."