A Meek Ending For Mighty Unit That Gutted AIG

Also see: "The Bailout Index" at smartmoney.com: "WHEN TARP WAS INITIALLY proposed, proponents argued that the bailouts would not only help stabilize the banking sector, but that the government would likely end up even making money on the deal when the depressed securities rallied and the economy improved. Judging by the performance of an index designed to track the bailouts, that’s looking less and less likely. ... "
•••
A Meek Ending For Mighty Unit That Gutted AIG
By Brady Dennis
Washington Post Staff Writer
Saturday, February 21, 2009; A01 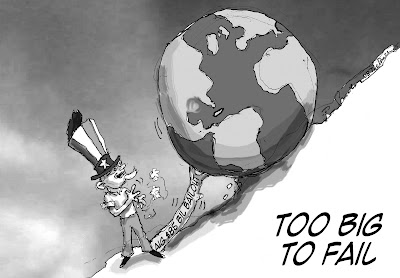 WILTON, Conn. -- In this small town an hour north of Manhattan, in a bland office park alongside suburban strip malls and gas stations, the unit that wrecked American International Group is dying a slow death. ...

The mission of this once-mighty enterprise has shifted in recent months. Once a virtual money factory, Financial Products is no longer growing and profiting, but shrinking and fading. Its workers, once power brokers of billion-dollar deals, are methodically extracting the firm from a tangled web of transactions that bound it to nearly every major financial institution in the world.

In recent years, Financial Products wrote a series of private contracts that faltered and came back to haunt its parent company in a very public way, leaving the insurance giant on the brink of collapse. Fearing that the failure of AIG could send shock waves throughout the financial system, the federal government stepped in last September with the single largest bailout of a company in U.S. history, a total rescue package of up to $152 billion.

Taxpayers now own nearly 80 percent of AIG. Federal officials are closely monitoring the company's operations and even signing off on key corporate decisions.

In November, AIG hired veteran Morgan Stanley executive Gerry Pasciucco to dismantle Financial Products, to terminate its outstanding trades, eliminate as much risk as possible and shut down its offices around the globe.

"My task is very narrow and very limited," Pasciucco said.

He is a grim reaper of sorts. His task is to take a firm that was once a darling of the financial world and make it go away.
•••
As word came of the federal bailout in September, a cloud of disbelief and disgrace settled over Financial Products. The firm founded on avoiding risk was suddenly synonymous with recklessness and ruin.

"It was a horrifying experience, watching it happen," said Jim Haas, the firm's co-leader of North American marketing and an employee since 1996. "There was a real badge of honor that one carried when they were able to tell people they worked for AIG, and in particular for AIG Financial Products. That vanished in a flash."

For years, the firm carved out a reputation as an innovative force envied and emulated on Wall Street. It made billions of dollars in the complex world of financial derivatives. But in 1998, executives approved a break from the firm's cautious past. Financial Products began writing credit-default swaps, which essentially insured a company's debt in case of default.

Executives at Financial Products viewed the swaps as "free money" because computer models showed almost no chance of ever having to pay out. But the swaps contracts included provisions requiring the company to put up cash as collateral if AIG's Triple A credit rating ever fell. When those downgrades came, signaling that AIG was no longer as reliable as it once had been, companies like Goldman Sachs that had done business with Financial Products demanded it put up billions of dollars.

By the end of 2007, AIG had suffered write-downs of nearly $8 billion on Financial Products' credit-default swap portfolio. The first two quarters of 2008 brought another $9.5 billion in paper losses.

"AIG bet the ranch on a business that wasn't part of our core business," current AIG chairman Edward Liddy said. "And when things seized up, we paid a hell of a price."

Only when Pasciucco arrived at the Wilton headquarters in November did he discover the full scope of winding down Financial Products. The firm had $2.7 trillion worth of swap contracts and positions; nearly 50,000 outstanding trades; 2,000 firms involved on the other side of those trades; and 450 employees in six offices around the world.

"Most of the business was written here appropriately," he said.

But the failure to prepare for the collateral calls had proved a fatal miscalculation. The firm had written contracts that lasted 50, even 70 years, but had not adequately guarded against the volatility that could bankrupt it along the way.

"If you don't account for that liquidity need, you can blow up the business," Pasciucco said. "That is really the fundamental problem."

As the collateral calls kept coming, the Federal Reserve Bank of New York announced in November it would create a separate company, dubbed Maiden Lane III, to help alleviate AIG's cash crunch caused by the credit-default swaps written by Financial Products. By buying up the underlying mortgage-related securities, the government freed Financial Products to terminate billions of dollars in credit-default swap contracts that had plagued AIG's balance sheet. So far, the government has poured more than $60 billion into the effort.

Pasciucco meets weekly with Federal Reserve employees, "making sure they're fully briefed on what we're doing and what our plans are," he said. In addition, four workstations on the firm's trading floor are reserved for Federal Reserve staff members who regularly visit Wilton. The Fed team sits in on steering committee meetings and must grant a waiver whenever the firm wants to make debt payments.

A bespectacled Harvard Business School alum who runs and plays squash, Pasciucco was a logical choice to oversee the unwinding of Financial Products. He had spent his career working in capital markets. A colleague at Morgan Stanley who was advising the government on the AIG bailout asked Pasciucco whether he'd be willing to help out, and he agreed.

Pasciucco devised a plan early on to divide the firm's portfolio into 22 groups, or "books," of business -- from foreign exchange to interest rates to commodities -- with the intention of closing them out one at a time. The goal was partly to help AIG pay back the government loan, but mostly to stem any further losses.

"You want to look across every one of your books and say, 'Where could I be surprised?'" said Pasciucco, 48. "Where I can be surprised, I want to get rid of that. We're trying to get rid of complexity and risk."

He approached about a dozen counterparties, all major banks in the United States and abroad, about buying Financial Products' holdings. He promised these firms favorable access to the company's holdings in return for their help in addressing Financial Product's need for cash.

"We've described each of the books to them," he said. "They've identified which books they may have an interest in. We've tried to make this a mutually beneficial relationship."

As a result, the firm has cut the number of outstanding trades by 25 percent, with the primary focus on reducing risk.

Last week, it announced the sale of two groups of financing contracts from its energy and infrastructure sectors, worth $60.5 million. That comes on the heels of an agreement last month to sell its commodity index business. There are more sales in the pipeline, Pasciucco said, but the complexity of many deals and unfavorable market conditions require patience and caution. Staffing numbers have fallen to 370 from 450, and the firm plans to close its Tokyo and Hong Kong operations this year.

Ultimately, Pasciucco hopes to have the riskiest fires at Financial Products mostly extinguished by the end of 2009.

"There are definitely some views that there's no way you can reduce a book of this size in less than four or five years," he said. "My view is we're going to break the back of the risk in 12 months."

The potential for disaster remains.

"There are going to be surprises," Pasciucco said. "There always are."

Few surprises could be worse than further downgrades in AIG's credit rating. Another slip could trigger a new round of collateral calls from Financial Products' counterparties and sink the parent company deeper into debt.

There's also the specter of investigations on both sides of the Atlantic. Last week, Britain's Serious Fraud Office announced that it had opened a preliminary investigation into the Financial Products' London operations, "to determine if there has been criminal conduct," according to the agency's director. Meanwhile, the FBI has been scrutinizing whether executives at AIG knowingly concealed mammoth losses that helped lead to the company's downfall. AIG has vowed cooperation in both investigations.

Then there is the thorny issue of the employees who remain at Financial Products. They are literally working themselves out of a job. As each set of business falls away, so do the people working on it.

"In a situation like this, it's hard to keep everybody on task, motivated, focused. People know they are going to be out of jobs," Pasciucco said. "So they are constantly doing that calculus in their heads, as to what's left in terms of what I get paid here? What can I get paid in a new career? When should I start my new career?"

For the better part of two decades, Financial Products had been a place where workers raked in princely sums, even by Wall Street standards.

Since the collapse, many Financial Products employees have lost nearly two-thirds of their compensation under the firm's deferred payment plan, in which bonuses are doled out over several years based on the firm's profitability.

"It's like the stock going to zero," Pasciucco said. "It's been wiped out."

Still, employees who stick around are eligible for hundreds of millions of dollars in retention payments -- half next month and the rest in March 2010 -- a practice that has roiled some members of Congress and further stoked public anger. Executives say the payments are justified because few people possess the expertise to handle the mind-bending transactions at Financial Products.

Haas, the Financial Products veteran, said no one at the firm is looking for sympathy. "The whole world hurts right now," he said. But he said the vast majority of current employees had no role in the problems that wrecked the firm, and many feel a measure of shame and guilt for how its troubles spread to AIG and helped poison the economy.

"People have great pride in this organization. Everyone is horrified at what happened," he said, adding they are determined to close down the firm with dignity and professionalism. "There's a duty. We owe it to AIG. And now we owe it to the government and the taxpayer."

These days, Haas avoids telling people where he works. But he and the others who remain still show up each week at the office park off Danbury Road. They keep framed pictures of smiling children on their desks. Letizia's Pizza in Norwalk still delivers each night to those who stay late, chipping away at the pieces of Financial Products until it is finally gone.