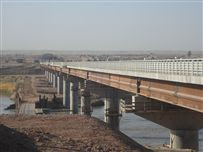 ohmygov.com reports: "A McClatchy investigative report has revealed that a U.S.-funded bridge linking Afghanistan to Tajikistan is widely used by international drug smugglers ... It is uncertain how long the Russians will tolerate this, as the number of Russian junkies increases to the tune of around 80,000 a year. They have already threatened to withdraw logistical support from NATO for the mission in Afghanistan unless the United States does more to cut the flow of heroin to Russia. ... To fully deal with the drug trade, the White House is going to have to reconsider its friendships in Afghanistan. Although it is assumed that drug trafficking is primarily benefits the Taliban, this is misleading. Not only did the Taliban nearly eradicate the poppy crop in 2001, but it is unclear how much of their financing actually comes from heroin — a liberal estimate says 40%. Much more drug money finds its way into the pockets of Afghan government officials. It should not come as much of a shock to see U.S. allies engage in selling narcotics — the CIA has a history of shady dealings ... "