Higher Ed and the Third Reich 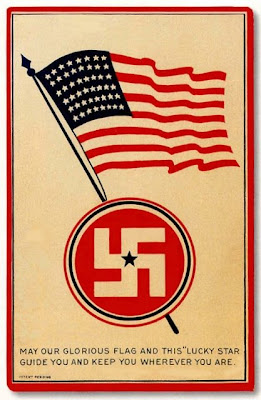 "Although academicians were the Americans most conversant with European affairs, few engaged in public anti-Nazi protest. As many working and lower-middle-class Americans marched in the streets and struggled to organize a nationwide boycott of German goods and services, American universities maintained amicable relations with the Third Reich ... "

A new book examines American colleges’ ties to Nazi Germany in the 1930s - and chronicles a record characterized by indifference, complicity and collaboration.

“In order to understand the whole course of development that leads us to the Holocaust, I think it’s very important to see what influential sectors in the United States were doing. And in the case of higher education, it’s a very shameful record of complicity and indifference to atrocities committed against the Jews from 1933 onward -- and actually a lot of collaboration, in terms of participating in well-organized student exchange programs, participating in well-orchestrated Nazi festivals in Germany, sending delegates to those and ignoring protests,” says Stephen H. Norwood, a professor of history at the University of Oklahoma and author of The Third Reich in the Ivory Tower: Complicity and Conflict on American Campuses, new from Cambridge University Press.

In an interview, Norwood describes university leaders as indifferent to evidence of a barbaric regime rising abroad in part because of their own polices of anti-Semitism and exclusion back home. "They just didn't care very deeply about Jews and anti-Semitism because they were themselves involved in maintaining quota barriers against Jewish students. There were very, very few Jews on the faculties of American universities throughout the entire inter-war period. And there are whole fields that were basically off-limits to Jews," he says.

Norwood’s book begins by laying out the evidence of Germany’s “unprecedented relapse into barbarism” in the months immediately following Hitler’s ascent to power: “The Nazis’ anti-Semitic terror in 1933 precipitated demonstrations and boycotts on an unprecedented scale, often initiated at the grassroots level,” Norwood writes.

“But although academicians were the Americans most conversant with European affairs, few engaged in public anti-Nazi protest. As many working and lower-middle-class Americans marched in the streets and struggled to organize a nationwide boycott of German goods and services, American universities maintained amicable relations with the Third Reich, sending their students to study at Nazified universities while welcoming Nazi exchange students to their own campuses. American’s most distinguished university presidents willingly crossed the Atlantic in ships flying the swastika flag, openly defying the anti-Nazi boycott, to the benefit of the Third Reich’s economy. By warmly receiving Nazi diplomats and propagandists on campus, they helped Nazi Germany present itself to the American public as a civilized nation, unfairly maligned in the press.”

Two of Norwood’s chapters feature his research on "legitimating Nazism" and "complicity and conflict" at Harvard and Columbia Universities, respectively; that research, when previously presented in other forums, has provoked controversy (more on that later).

The book goes well beyond the Ivies, however, and another chapter focuses on the all-female Seven Sisters Colleges -- which, despite Nazi-era quotas limiting women's enrollment at German universities, staunchly promoted the Junior Year in Munich up until the start of the war. (“In September 1939,” Norwood writes, “with war looming, a ‘dauntless group’ of juniors assembled in New York City eager to sail to Europe for a year of study at the University of Munich; it was prevented from doing so only by the outbreak of hostilities.”)

While much of the book details failures of university leadership, one chapter, called "Nazi Nests," focuses on the faculty - specifically those of German programs. “University German departments, often staffed by faculty members sympathetic to the Hitler regime, and the German clubs they sponsored, constituted important bases of support for Nazi Germany in the United States,” writes Norwood. German departments at the Universities of Minnesota and Wisconsin hosted receptions for Hans Luther, Nazi Germany's ambassador to the United States, and German faculty members were prominently represented at anniversary celebrations for the Universities of Heidelberg and Goettingen, in 1936 and 1937, respectively.

The chapter also traces the termination of the single anti-Nazi German faculty member at the New Jersey College for Women (now Douglass Residential College, a part of Rutgers University), as illustrative: “The issues involved in [Lienhard] Bergel’s termination are complicated,” Norwood acknowledges, “but what is most alarming about the case is the administration’s indifference to having an all-Nazi German department at NJC, and the Rutgers’ trustees’ obvious hostility to committed opponents of Nazism."

Another chapter throws an unflattering spotlight on the University of Virginia's Institute of Public Affairs' roundtables, which, from 1933 to 1941, "provided a major platform and an aura of academic legitimacy for Nazi Germany's supporters and for the propagation of antisemitism," Norwood argues. Charged with presenting "both sides of questions," Virginia's administration worked closely with Nazi Germany's embassy in Washington to find speakers, and, Norwood writes, they "accorded great respect to the Nazi spokespersons, some of whom the U.S. government later arrested as seditionists, as unregistered German agents, or for disseminating Nazi propaganda."

Meanwhile, Norwood criticizes American Catholic universities for keeping up friendly relations with Benito Mussolini's Fascist government, and also for their support of the Fascist General Francisco Franco in Spain ("Catholic leaders in the United States and Europe considered Franco's war against the democratically elected Loyalists a religious crusade against Communism," Norwood writes). Norwood writes about the firing of Moyer Springer Fleisher, a bacteriology professor at Saint Louis University, for sponsoring a pro-Loyalist lecture.

It's Norwood's research on Harvard and Columbia, however, that -- at least to date -- has been most high profile. Norwood writes, among other things, of then-Columbia President Nicholas Murray Butler's "warm" reception of the German ambassador, Luther, describing him in 1933 as "the official diplomatic representative to the Government of the United States on the part of the government of a friendly people." The university dismissed a Jewish instructor of art history, Jerome Klein, who signed a protest against the invitation to Luther, and also expelled a student, Robert Burke, who had protested the university's decision to send a delegate to the University of Heidelberg's 550th anniversary celebration, in 1936.

Columbia released a statement on Norwood's research in 2006 that the university spokesman, Robert Hornsby, said still stands. “It is true, as Professor Norwood claims, that an official of the German government spoke on the Columbia campus in 1933 and that the University sent a representative to the University of Heidelberg in 1936 to attend the celebration of its 550th anniversary.

"In retrospect, one might wish that no one who believed in democratic values would have had any connection with Germany after Hitler’s accession to power. But in fact, American interactions with Nazi Germany – financial, commercial, cultural, academic, and political -- were extensive throughout the 1930s and even into the first months of World War II. If the events that Professor Norwood describes are examples of ‘collaboration,’ then the collaborators include many thousands of leaders and citizens of the United States, Britain, and many other nations," the statement reads, in part.

“The President of Columbia in the 1930s, Nicholas Murray Butler -- like many presidents of elite universities of his era -- tried for a time to limit Jewish enrollment at the University, an effort of which Columbia is not proud. But Butler himself called the Nazi regime the chief threat to democratic institutions in the world in1937.... Professor Norwood is entitled to his extravagant interpretation of Columbia’s modest interactions with Germany in the 1930s. Few historians would take it seriously as a reasonable response to the facts he has assembled."

Norwood, a graduate of Columbia's Ph.D. program, says he's "truly shocked that Columbia is standing by its earlier statement. It's completely beyond comprehension that a university administration which is supposedly committed to exploring the truth and promoting learning is shutting off its mind completely to critically important issues.... I think it's irresponsible, it's anti-intellectual ... their view that everybody's doing it so what's the big deal?" Norwood points, too, to the well-known Holocaust scholars who have endorsed his book. It's blurbed by David S. Wyman, author of The Abandonment of the Jews: America and the Holocaust, 1941-1945, and Steven Katz, director of the Elie Wiesel Center for Judaic Studies at Boston University, among others.

Many have called on universities to dust off and study the skeletons in their closets in recent years, especially since Brown University released its landmark study into its own ties to the slave trade in 2006. "I'm hoping people read the book and come to grips with what happened, and at least devote more study to this period and try to learn the lessons so that we don't repeat the mistakes that higher education leaders made in that period," says Norwood.

The period under scrutiny ends in 1938 after the Kristallnacht pogroms in Germany. Only then, Norwood writes, "did American universities become significantly involved in protest against Nazism. Even then, the initiative came largely from students."