... James Von Brunn, born in 1920, is said to have been associated with rightwing white supremacists. It's known that in 1964, former Marine Corps Lt. Gen. Pedro Del Valle gave Von Brunn a copy of The Iron Curtain over America, by John Beaty, of which Von Brunn said, "For the first time, I learned how Jews had destroyed Europe and were now destroying America."

The Iron Curtain over America (1951) was called by the Anti-Defamation League of B'Nai B'Rith one of the most anti-Semitic books ever written in the United States.

In it, Beaty claimed Eastern European Jews, such as Supreme Court Justice Felix Frankfurter and Samuel Rosenman, President Franklin Roosevelt's speechwriter, were part of that conspiracy. The book also gave intellectual currency to some of the anti-communist outrages that Sen. Joseph McCarthy was associated with.

Del Valle recommended Von Brunn to a position with rightwing book publisher Noontide Press, whose founder Willis Carto was a Holocaust denier, and who formed Liberty Lobby that aspired to have public policy influence. 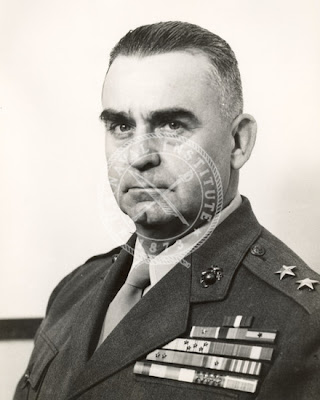 Del Valle had a distinguished military career in both world wars and was the first Hispanic to reach the rank of lieutenant general. In 1946 he was considered by President Truman as a possible governor of Puerto Rico, when the post was an appointive one.

Del Valle retired from the military in 1948. In 1953, he and four other high-level former military officers formed the Defenders of the American Constitution, intent on purging the United States of supposed communist influences and they organized citizen-vigilantes to guard against sabotage and treason.

Del Valle ran for governor of Maryland in 1953 but was badly defeated in the Republican primary because of his controversial views. ...

Of the "Anti-Communist Liaison" involved the assassination in Dallas on November 22, 1963, Charles Willoughby (the alias for German-born Kurt Weidenbach, MacArthur's chief of military intelligence) was the highest placed. Willoughby/Weidenbach did much of the planning, and moved personnel about with strategic military precision, leaving a number of false, self-incriminating trails for reporters and the FBI to follow after President Kennedy was dead, including Mafia figures and lower echelon intelligence assets, eg. Lee Oswald. James von Brunn's friend Pedro del Valle, a vice president at ITT, went on to be instrumental in the overthrow of Salvador Allende and the establishment of a military dictatorship in Chile. - AC

... A White House memorandum prepared for JFK in mid-August 1963 estimated that the radical right spent as much as $25 million annually, supported by about 70 foundations, 113 corporations, 25 utility companies, and 250 identifiable individuals.

In the thick of it all, and much more, was Charles Willoughby. While his mentor, General MacArthur, passed into quiet retirement and was occasionally sought by Kennedy for advice, Willoughby approached his seventieth birthday with samurai swords placed strategically next to his desk. Willoughby's holy war against the "Red Menace" found him sitting on the boards of most of the major conservative groups, and reaching into Europe and Latin America to start his own International Committee for the Defense of Christian Culture... 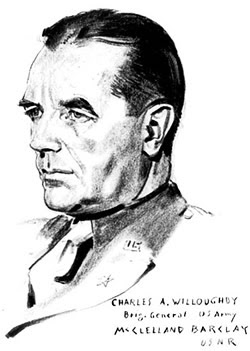 Kurt Weidenbach, aka Charles Willoughby, chief of General MacArthur's military intelligence staff in Korea, and something of a chess master at political assassination strategies

Willoughby's publisher and friend Billy James Hargis was a short, portly, double-chinned fellow in his midthirties who gained much of his financial support from H. L. Hunt and other wealthy oilmen. Along with Willoughby, who was his Washington eyes and ears, another of Hargis's advisory committee members was retired lieutenant general Pedro del Valle, US Marine commander in the Pacific Theater during World War II. After the Korean War, del Valle had become vice president of ITT's Latin American operations.

In September 1961 Hargis announced that a secret fraternity to coordinate right-wing activities would soon be formed. Then, on March 21,1962, a carefully selected group was called together in Washington. No press representatives were allowed at the founding session of the Anti-Communist Liaison, which brought together about one hundred delegates representing some seventy-five right-wing groups at the Washington Hotel. Named as its chairman and operating head was Edward Hunter, a National Advisory Board member of Young Americans for Freedom. 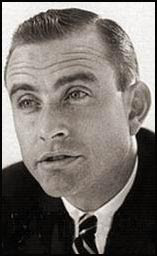 John Rousselot - Spartacus Bio: "In 1975 Harry Dean claimed he had been an undercover agent for the Federal Bureau of Investigation. In 1962 he infiltrated the John Birch Society. He later reported that Rousselot and General Edwin Walker had hired two gunman, Eladio del Valle and Loran Hall, to kill President John F. Kennedy. However, Dean was unable to provide any evidence to back up his claim. After being defeated in 1982 Ronald Reagan appointed him President of the National Council of Savings Institutions (1985-88)."

The new group's insider was US representative John Rousselot, a John Birch Society spokesman and Christian Crusade board member from Los Angeles. It also had a Southern California "outsider," Colonel William P. Gale, yet another ex-MacArthur man. In 1962, as California state chairman of the Constitution Party, Colonel Gale announced his candidacy for the governorship on a platform calling for the abolition of all income taxes. He also organized, soon after the pivotal springtime meeting in Washington, a paramilitary outfit. ...

Posted by Alex Constantine at 6:53 PM

Thank you for writing real history. Del Valle was the mentor to the Holocaust Museum killer. I wonder who was the mentor to the Argentinian fascist who killed the mothers commemorating their dead children under Pinochet?
I moved to South America because I was hounded in Los Angeles by Group Stalkers, as written about by David Lawson in his 73-page book (excerpts at www.raven1.net)
In Argentina, 5 months ago, the killer of one of the mothers who used to march on Sundays to commemorate their childrens´ disappearance under Pinochet was sentenced to prison. How long do we have to wait for justice while fascist murderers are given free reign?

FYI: Harry Dean is a fraud. He never was an informant for the FBI.

A while back I was asked for information concerning Harry Dean who claims that he infiltrated the John Birch Society from 1962-1964 and that he was an informant for the FBI.

During my research I received an FBI document which pertains to an inquiry about a column by James Horwitz on page 2 of the 3/16/77 issue of the Las Virgenes (CA) Independent Valley News.

The Horwitz column reports upon an "exclusive interview" with Harry Dean during which he repeated his claims about his alleged association with the FBI as an undercover operative or informant from 1960-1965 (notice that in this interview, Dean changed the years to include 1965).

The Assistant Director in Charge of the FBI's Los Angeles field office (Robert E. Gebhardt) saw a copy of the Horwitz column because of an inquiry he received about it. Gebhardt responded to the inquiry about Dean's assertions and he forwarded a copy of his 4/1/77 reply to James K. Coffin, the Publisher of the Las Virgenes Independent Valley News.

Here is the pertinent excerpt:
"In the interest of accuracy, I must advise you that Harry Dean has never been an undercover operative of the Federal Bureau of Investigation, has never been an informant of this Bureau, and has never been instructed to perform any act on behalf of the Federal Bureau of Investigation. Furthermore, I can tell you that the FBI has never investigated the John Birch Society. I am bringing the above information your attention. You might consider furnishing this information to the readers of your column."