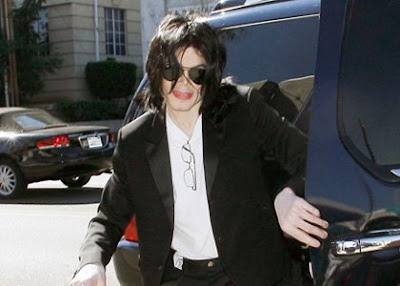 What LaToya Jackson said (People magazine): "The grieving sister of superstar Michael Jackson last night blamed ‘a shadowy entourage’ of manipulative hangers-on for effectively 'murdering' the King of Pop. ,.. She believes her brother was fed addictive drugs by handlers who wanted to control his moods. She says they regarded him as a ‘cash cow’ and exploited him at every turn. It was this, she believes, that led directly to his death. ... After returning from the hospital with the children and her mother to Katherine’s home, they received a troubling call from the Jackson mansion. It was Michael’s long-term assistant Michael Amin, a devout Muslim known as Brother Michael. He told La Toya that her brother’s Lebanese-born, self-appointed business manager Dr Tohme Tohme had fired all the staff at the Beverly Hills property and at a second rented home in Las Vegas. ‘I want to know how Michael died, and then, at 11pm on the day he dies, all the staff are fired?’ she asks rhetorically. ‘That raised my suspicions.’ ... While Michael regularly kept up to £1million in cash inside his home, La Toya says none was found. Nor was any of his vast collection of jewellery ...

"Someone went in there and did a good job."

"Murder," She Wrote (re the People Magazine LaToya J. Interview)

" ... LaToya, 53, a onetime Playboy model who was estranged from the rest of the Jackson family for a time in the early 1990s after she claimed her brother acted inappropriately with children, did not give any proof to back up her murder claim. She told the Mail that the family has received the results of a private autopsy it ordered, but she declined to reveal the findings of those tests. ...

"Reporter Graham said the choice of words from LaToya 'stopped me dead in my tracks,' prompting her to ask, 'Are you sure the word "murder" is what you want to use?' Jackson responded that she purposely chose that word. "He was surrounded by a bad circle," LaToya said in the interview. "Michael was a very meek, quiet, loving person. People took advantage of that. People fought to be close to him, people who weren't always on his side ... "
http://www.mtv.com/news/articles/1616199/20090714/jackson_michael.jhtml

From: This is London, http://www.thisislondon.co.uk, on Tohme and manager Frank DiLeo (ties to Gambino Mafia Family), "Mystery over doctor who tried to save dying Jackson," 26.06.09:

" ... the man who allegedly tried and failed to resuscitate Michael Jackson following his heart attack - Dr Tohme Tohme has been described as Jackson's personal physician, close friend, manager and official spokesman. Today he stood silently by the side of Jermaine Jackson as he announced to the world that his brother had died. According to Jermaine, Dr Tohme was with Jackson when he collapsed at his rented home in Los Angeles yesterday and then tried to resuscitate the pop star. Asked for his reaction at the press conference, Dr Tohme simply replied that Jermaine would be the only representative for the family. According to close associates, Jackson and Dr Tohme had fallen out since coming to London in March to announce his comeback tour. Sources say they were no longer on speaking terms. Jackson is said to have formally notified associates last month that Dr Tohme, who paved the way for the deal for the This Is It tour, was not representing him after he received a cease-and-desist letter for the O2 residency from AllGood Entertainment, the company that had represented the Jackson 5. ... The row had led to Jackson re-connecting with Frank DiLeo, who managed the singer in his Eighties heyday. ... "
http://www.thisislondon.co.uk/standard/article-23712784-details/Mystery+over+doctor+who+tried+to+save+dying+Jackson/article.do

A "self-made financier with a murky past" who was "a close personal friend of Tom Barrack, CEO of Colony Capital" and who also personally negotiated the concert deal with [Anschutz's] AEG Live, Tohme "had stiff competition from others who wanted to take over Jackson’s finances." 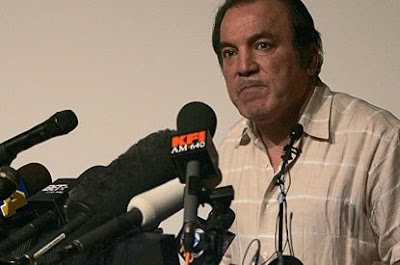 Earlier today, the Los Angeles police department said detectives had briefly spoken to Jackson's "personal physician" - whom they would not identify -- shortly after Jackson's death, but wanted to speak to him again.

At first, reports identified the doctor at Jackson's side as Dr. Tohme Tohme. But he told The Post he wasn't the doctor at the scene. [Contrast this with Jermaine Jackson/Dr. Tohme statements in the This is London excerpt above - they are irreconcilable - AC.]

Jackson’s mysterious adviser Tohme opens up: ‘I built a fence around Michael to keep people out,’ says Dr. Tohme Tohme, an advisor to Michael Jackson, stands in front of a painting of Jackson titled "The Book," by artist Brett-Livingstone Strong, in the law office of Dennis Hawk in Santa Monica, Calif., on Friday, July 3.

LOS ANGELES - Dr. Tohme Tohme vividly remembers the first time he met with Michael Jackson to discuss the pop star’s finances. It’s not the money talk that stays with him now, but his enchantment at entering Jackson’s world of love.

“I saw how kind he was and what a wonderful human being,” Tohme said in an interview. “I saw him with his children and I had never seen a better father. ... I decided to do what I could to help him.”

Tohme, a financier with a murky past, had been contacted by Jackson’s brother, Jermaine, who asked if Tohme could help to save Jackson’s beloved Neverland ranch from foreclosure. Tohme said he traveled with Jermaine to Las Vegas, where Jackson was living after years of wandering the world following his acquittal on child molestation charges.

They bonded instantly. “For the last year and a half I was the closest person to Michael Jackson,” Tohme said. He contacted Tom Barrack, the chairman of Colony Capital and a close personal friend. “He was hesitant to get involved, but I said, ‘Let’s go see Michael,’” Tohme recalled.

After the meeting he said Barrack, who was impressed with Jackson’s “intelligence and focus,” bought the note for Neverland. But that was just the beginning of a business relationship that culminated in the London concerts that were to have begun next week.

Wearing a suit with no tie, Tohme, Jackson’s last business manager and spokesperson, granted his first interview Friday to The Associated Press in the office of a lawyer friend.

Tohmen, listed in public records as being in his late 50s, has been portrayed as something of a mystery man in the Jackson brain trust.

“I hate the words ‘mystery man,’” he said. “I’m a private man. A lot of people like the media and I don’t. I respect the privacy of other people but lately nobody respects mine.”

As he spoke, his cell phone rang constantly. He took only a few calls, one of them from Jesse Jackson.

He has been stung by allegations that he was involved with the Nation of Islam, which he said was untrue.

It is known that he is of Lebanese descent. His double name — pronounced toh-MAY’ — is not uncommon in the Middle East. But he declined to go into detail about his own life and career other than to say he is a U.S. citizen who was raised in Los Angeles and, “I’m a self-made man. I’m in the world of finance.”

At times he appeared on the verge of tears as he discussed Jackson’s death, saying, “It’s unbelievable ... I’m devastated ... God bless his soul.”

He said that by talking about Jackson, he was fulfilling one of the star’s wishes.

“He always said to me, ‘I want people to really know who I am after I’m gone.’”

‘I’m a stranger to this business’

He would only briefly discuss Jackson’s finances. During his time with the superstar, Tohme said, he was paid nothing but was able to negotiate lucrative business deals that would secure the future of Jackson’s children. He followed a long line of business managers and spokespeople who had come and gone from Jackson over the years. In the final year, he said he played a pivotal role in turning things around.

His negotiations for Jackson included a Broadway show with the Nederlander organization, an animated TV show based on “Thriller,” a line of clothing including “moonwalk shoes,” and more. He said he was working with others to renegotiate the terms of Jackson’s main assets, his share of the Sony-ATV Music Publishing Catalog — which includes music by the Beatles — and the catalog of Mijac, the company that controls Michael Jackson’s own music.

“I am not in the music business. I’m a stranger to this business,” Tohme said, noting that he had stiff competition from others who wanted to take over Jackson’s finances.

“I built a fence around Michael to keep people out,” he said, acknowledging that he cut costs by firing many members of the Jackson staff, including security guards. And he twice fired the children’s nanny, Grace Rawaramba, on Jackson’s orders.

“I was trying to do what we could to maximize his profits and minimize spending. I wanted to find a way to reel in all the loans he had.

Tohme said he abandoned everything he was doing in his own life to concentrate his time and effort on Jackson’s affairs. He points with pride to the crown jewel of his and the new Jackson team’s efforts: the contract with AEG for concerts at the 02 arena in London.

[In an apparent conflict of interest,] Tohme Tohme [has] business relationships with both Michael Jackson (as manager and President of MJJ Productions) and with Colony Capital (a client of Mr. Tohme’s TRW Advertising) ...

The website for Tohme’s TRW Advertising (Tohme, Rogich, & Weller) (www.trw-adv.com) is not accessible to the public (it's client-only and password-protected).
Posted by Alex Constantine at 2:10 PM

THIS IS THE TRUTH ABOUT MICHAEL'S DEMISE!

TOHME did NOT fire all the staff the day MJ passed.

MJ's PERSONAL PHYSICIAN WAS CONRAD MURRAY. DR. MURRAY was with MJ the day he died, NOT Tohme.

Also, FRANK DILEO was the perosn named in the ALLGOOD lawsuit against MJ. TOHME is NOT named in the lawsuit. It's DILEO supposedly signed a contract with a New Jersey concert promoter to do a Jackson Family reunion tour, even though many of the family members supposedly claimed to know nothing about it at , and even though FRANK DILEO wasn’t even MJ”s manager at the time he signed the contract. TOHME WAS.

FRANK DILEO was possibly hired by MJ or AEG sometime in April for the O2 concerts.