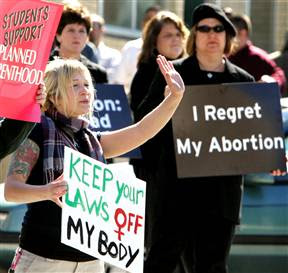 Contemporary American "conservatives" frequently argue that abortion is tantamount to Nazi mass murder. I've studied Nazism for 20 years and strenuously disagree. "Pro-live" is a misnomer - fascists want power over women, and if it comes to strapping them down and forcing them to conceive, this is how control will be exercised.

" ... The district court of Lueneburg, in the province of Hanover, has made a ruling in a case in which a Jewish woman was concerned, which will doubtless provide a precedent for similar cases. The woman was accused of procuring an abortion on herself, thus infringing Paragraph 218 of the German penal code. ... " The right has agitated for decades to revive the Nazi policy of criminalization - but abortion is a matter of personal choice, not a fascist atrocity. Mandatory childbirth law, complete with sentencing guidelines - even the death sentence during the most stringent period of Nazi rule - was the atrocity.

- Alex Constantine
•••••••
The campaign to convince the citizens of the Reich that world Jewry is combining with the democracies in a vast anti-German conspiracy continued unabated during the weekend.

The Juedische Rundschau, the leading Jewish newspaper, which in common with all Jewish publications has been completely banned, is to be permitted to appear again for the purpose of announcing such occasions at this stage production. It will, however, not be permitted to carry any news or advertisements.