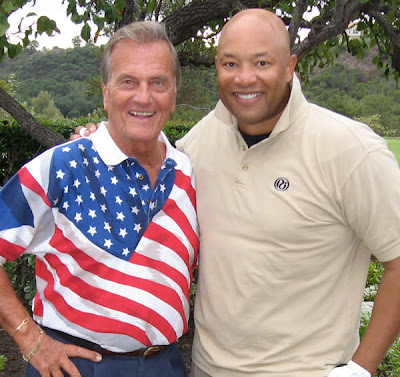 " ... Pat Boone, 71, is one of America's most beloved entertainers. In the 1950s, he was the nation's second most popular singer after Elvis Presley. His hits, "April Love'' and "Love Letters in the Sand," were No. 1 for six and seven weeks respectively. He starred in 15 movies, including Journey to the Center of the Earth and State Fair. Long an active conservative Republican, Boone is Currently spokesman for the 60 Plus Association. ...

"PAT BOONE: I was not involved politically at that time. Then, I felt so strongly about anti-communism and I did read Fred Schwartz's book and then came his crusade at the sports arena. What Schwartz said in his book [You Can Trust the Communists-To Be Communists] made perfect sense to me. The phrase, 'Better Red Than Dead,' was sweeping college campuses at the time.

"When my time came to say a few words, I quoted that sentiment. I said I've got four little girls and if it ever came to that, although I pray it never will, I would rather see my four daughters blown to heaven in an atomic blast than caught in the hell of a Communist United States.

"It impressed Reagan and he quoted that a number of times, beginning by saying, 'I once heard a young father say.' That's what occurred that night.

"My activism and my being very outspoken never abated after that and it has cost me as an entertainer. There is a visceral antipathy that producers, hirers and firers have. I feel myself in the other direction. I have feelings I have to control of anger and total disregard for certain actors and outspoken people in our business that I think are ruining American culture. ... 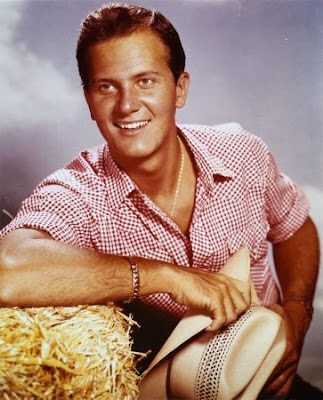 Birth of a Legend

"Boone was raised primarily in Nashville, Tennessee, a place he still visits often. The son of Mr. and Mrs. A.A. Boone, his family moved to Nashville from Florida when Boone was two years old. He attended and graduated from Hillsboro High School in Nashville in 1952. He then attended Lipscomb College, now Lipscomb University, in Nashville. Boone grew up as a Christian in the Church of Christ denomination, and Lipscomb is a very popular Church of Christ university. Boone was born in Jacksonville, Florida. ...

"A devout born-again Christian, he was raised in the conservative Church of Christ, but joined a Pentecostal church in the late 1960s. Boone has refused both songs and movie roles that he felt might compromise his standards, including a role alongside the decade's reigning sex symbol, Marilyn Monroe. In his first film, April Love (film), he refused to give co-star/film love interest Shirley Jones an onscreen kiss, because the actress was married in real life. This position is contradicted by what Hustler Magazine claimed in its January 1984 issue to be a genuine photograph of a younger Pat Boone exposing his genitals through a hole in a cardboard box.[5] Among his other achievements, he hosted a TV series in the late 1950s and began writing a series of self-help books for adolescents, including Twixt Twelve and Twenty, in the early 1960s.

"The British Invasion ended Boone's career as a hitmaker, though he continued recording throughout the 1960s. In the 1970s, he switched to gospel and country, and he continued performing in other media as well. He is currently working as the disc jockey of a popular oldies radio show and runs his own record company which provides an outlet for new recordings by 1950s greats who can no longer find a place with the major labels. ... "
http://en.wikipedia.org/wiki/Pat_Boone
•••
Pat Boone: CBS and 60 Minutes Are 'Modern Benedict Arnolds' "... for their role in revealing the prisoner abuse scandal at Abu Ghraib prison in Iraq ... "

Recently, entertainer Pat Boone wrote NewsMax editor Christopher Ruddy a letter regarding his feelings on Abu Ghraib and Iraq, the contents of which are published here with permission:

Hasn't anybody got the guts to accuse the worst perpetrator in this whole Abu Ghraib prison debacle - CBS and 60 Minutes II?

What do you call it when, in time of war, someone takes military intelligence and turns it over to the enemy, who in turn uses it to kill Americans?

Isn't that the definition of treason? Did Benedict Arnold do worse? Did Julias and Ethel Rosenberg pay with their lives for something like this?
http://urbanlegends.about.com/library/bl_pat_boone_cbs.htm

"The above letter was written by entertainer Pat Boone and was first published on the conservative news Website NewsMax.com on May 24, 2004."
••• 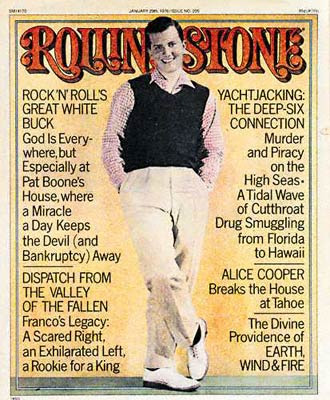 " ... The story begins with Michael Jon Hand. In May 1963 Hand joined the US Army and started his training at Fort Bragg, North Carolina. In Vietnam he won the Distinguished Service Cross (DSC). According to the DSC citation he almost single-handedly held off a fourteen-hour Vietcong attack on the Special Forces compound at Dong Xaoi.

"In 1966 he left the army to work "directly for the U.S, Government". Friends of Hand have suggested that he was employed on undercover missions for the Central Intelligence Agency in Vietnam and Laos. One reported that he "helped train the mountain people - Montagnards - and worked closely with the Air America crews that supplied them". According to Jonathan Kwitny, Michael Hand worked for William Colby during the Vietnam War. 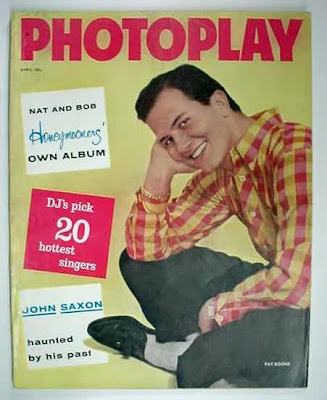 "Michael Hand moved to Australia in September, 1967. At first Hand went to work selling development lots along the Australian coast. The company, Ocean Shores Development, was run by lawyer Fred Miller, a senior executive for the shipping empire owned by Sir Peter Abeles, the longtime business partner of Rupert Murdoch. One of the largest investors in this scheme was the singer Pat Boone. The registered directors included Boone of Beverly Hills, California and Pat Swan of Sydney, Australia. ... "
http://209.85.173.132/search?q=cache:Prf4I7Vu6rMJ:educationforum.ipbhost.com/index.php%3Fshowtopic%3D7369+pat+boone+and+nugan+hand&hl=en&ct=clnk&cd=1≷=us
•••
BOONE PAT (NAMEBASE)

"The landing strip involved in the 1973 Australian Narcotics Bureau report was on a real-estate development promoted by American singer Pat Boone and Financed by millionaire D.K. Judwig." 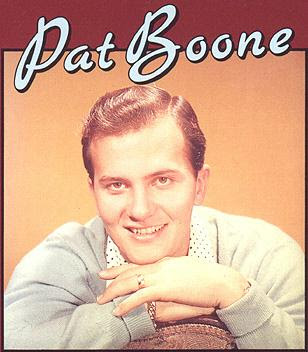 Boone and "Friends of Abe"

A group of politically conservative and centrist Hollywood figures organized by actor Gary Sinise and others has been meeting quietly in restaurants and private homes, forming a loose-knit network of entertainers who share common beliefs like supporting U.S. troops and traditional American values.

Some of those involved are taking more public steps to counter the entertainment industry's tilt toward liberalism and Democratic politics, such as campaigning for Republican Sen. John McCain or crafting projects to portray America in a more positive light.

The group, whose members call themselves "Friends of Abe" after Abraham Lincoln, was organized as an underground movement because of fears that prominent industry titans with outspoken liberal views would retaliate, said participants. They often were reluctant to name members of the group in interviews for fear it would hurt their careers.

"It's a growing movement, and word is getting out that there's many of us in this business ...," said 1950s singer Pat Boone, one of the few conservatives to talk about the movement publicly. "If certain studio execs - hirers and firers - learn that this is a movement and growing, and that some of these people that they hire are of this inclination, these people could be unemployed."

Friends of Abe has functioned like a support group, organizing informal gatherings where actors, producers, screenwriters, key grips and other industry types can share common values or discuss concerns like anti-Americanism in Hollywood movies or the perception of industry bias against conservatives and Republicans.

Charlotte, N.C. (CNSNews.com) - Entertainer Pat Boone Thursday urged pro-lifers to continue their fight for life. "We do not have to succumb to the theme that deluges us and our young people and is constant in television, music and radio and books and even schools and drugs and violence and all that permeates our society," he told the National Right to Life Committee's annual convention here.

Boone blamed the Roe vs. Wade Supreme Court decision for the coarsening of America. ...
http://www.democraticunderground.com/discuss/duboard.php?az=view_all&address=389x1669854
--------
Get Pat's latest book, Questions About God – And the Answers that Could Change Your Life
--------
Christian Patriot Pat Boone Recommends Gassing "Vermin" Barack Obama

Needed: A tenting of the White House
By Pat Boone
WorldNetDaily Exclusive Commentary

In time, it seems to happen to all older houses, no matter how well tended they may be.

All manner of parasites, vermin, roaches, rats, worms and termites find their way into the building. Long before they're detected, they infiltrate the walls, the floors, the roofs – and then chew their way into the structure, the supporting beams and the very foundation of the house itself. Silently, surreptitiously, whole communities of invaders make places for themselves, hidden but thriving, totally unknown by the homeowner.

Then, in time, tell-tale signs are seen. Little droppings, discolored trails, proliferating piles of residue appear in corners, on tabletops, little hanging sacs from ceilings alarming evidence that the grand old dwelling has been invaded. Decidedly unwelcome creatures have made this place their home and by their very existence will eventually destroy the house and bring it to ruin.

What can be done, when you learn that your house has already been invaded?

Well, the tried and true remedy is tenting.

Experts come in, actually envelope the whole dwelling in a giant tent – and send a very powerful fumigant, lethal to the varmints and unwelcome creatures, into every nook and cranny of the house. Done thoroughly, every last destructive insect or rodent is sent to varmint hell – and in a day or two, the grand house is habitable again.

I believe – figuratively, but in a very real way – we need to tent the White House! ...
Posted by Alex Constantine at 3:51 PM