Book Review: The Dark Geography of the Pentagon’s Secret World 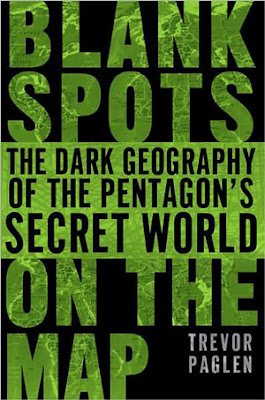 Trevor Paglen, Blank Spots on the Map: The Dark Geography of the Pentagon’s Secret World (Dutton, 2009)

As a modern discipline, geography finds its precedents not in the halls of a university but in the stately parlors of early 19th century Europe. During this period, maps were highly prized commodities, state secrets of the highest order, and their possession was deeply bound to notions of conquest and geopolitical power. From headquarters in London and Paris, royal geographical societies staked the claims of empire on the sons of the elite, training future explorers in the fine arts of botany, seafaring, and, for whatever it was worth in the age of eugenics, cultural diplomacy. In geography’s heyday, famous explorers were household names, and science, trade, and mapping—in short, a country’s prospects for global dominance—rested squarely on their shoulders.

Nearly 200 years later, geography has long been domesticated into academia, but its historical ties to power linger. In Berkeley’s McCone Hall, home to the university’s world-renowned geography department, recruitment letters appear every spring from the National Geospatial-Intelligence Agency—motto: “Know the Earth… Show the Way”—urging young geographers to put their skills to use and map in the name of national defense. Those who don’t tend to find work in the fields of urban planning and GIS development, assuming control over the infrastructures that quietly inform how people interact with space. Others, like Trevor Paglen, take a different approach still. Rather than use geography as an instrument for drawing borders, Paglen, a self-described “experimental geographer” (and easily the Berkeley geographer most likely to wind up on the side of a milk carton) uses it instead to radically expose them. For Paglen, geography is a way of jumping down rabbit holes, a means of uncovering the world’s most chilling and clandestine locales, and then, usually to the displeasure of those who run such sites, marking them on the map.

If you’re already familiar with Trevor Paglen, it’s very likely due to his work as an artist. In 2006, Paglen shocked the New York scene with his show (at Bellwether) titled “Black World,” a documentation of the CIA’s extraordinary rendition program that featured hazy photographs of military planes shot from his hotel window 42 miles away. Through following a seemingly innocuous trail of flight patterns and tail numbers, Paglen uncovered an elaborate stealth network that extended all the way back to the highest reaches of government power. In addition to these photos—some of which are the only public records of highly classified sites—Paglen put on display his personal collection of black op military patches: bizarre insignia that announce covert intelligence programs through kitschy Latin phrases and Star Trek-inspired designs. (My personal favorite: a patch with an Independence Day alien hovering ominously above the phrase “Gustasus Similis Pullus”—“tastes like chicken.”) Equally at ease with both the arcane and the epic, ‘Black World’ exhibited one of Paglen’s true gifts as an artist-cum-academic: his uncanny ability to find the devil in the details, and then reveal the workings of something larger. This is why, when he declares an interest in a seemingly obscure aspect of the military-industrial complex, such as, say, the resumes of retired Air Force pilots, it’s generally a good idea to pay attention.

Paglen’s latest book, Blank Spots on the Map, delves deeper into his fascination with the invisible architectures of power through exploring the shadow world of Pentagon operations. In the early pages of Blank Spots, Paglen presents his methodology for such a task, remarking that “secrecy can only work as a Band-Aid,” and inevitably, “blank spots […] outline the things they seek to conceal.” With this as a rule of thumb, Paglen sets off, beginning his adventures in the nearby black site of Groom Lake (unacknowledged home of CIA test flights) and ending in the rural outskirts of Honduras and Afghanistan, areas haunted with the ghosts of clandestine U.S. military operations. At once an exhaustive history of the black world (to the extent that this is possible) and an outlaw travelogue, in Blank Spots Paglen hones his role as an intellectual MacGvyer, using publicly available tools to gather information about events that never happened, and to record traces of things that don’t exist.

Ultimately, what’s most remarkable about this book isn’t what Paglen uncovers—he’s usually stuck at the periphery, unable to penetrate the classified sites he’s not even meant to see—but rather how he does it. Often beginning with only a clue, Paglen embeds himself in hotel rooms and hobbyist communities, archiving the physical elements of the black world and interviewing the people who have borne witness to the invisible. In this sense, his tactics are as radically democratic as his project: aside from a high-powered camera and some Berkeley research funds, Paglen’s most valuable resources are his laptop and critical intelligence. While undoing the counter-mappings of power is a formidable task—especially after eight years of consolidation and secrecy—Blank Spots is smart and encouraging proof that it can be done. After all, as Paglen notes, regardless of how elaborate it is, “the black world, like the rest of the world, is inescapably spatial.”