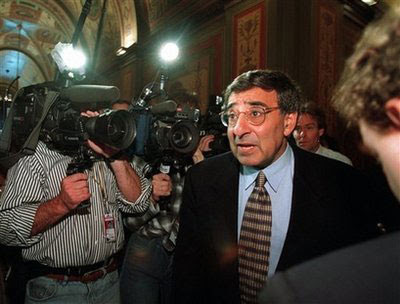 The latest on Obama's culture of corruption ...

Panetta is a fixture at the Iraq Study Group, co-chaired by James Baker III and Lee Hamilton.
•••
http://www.usip.org/isg/members.html

" ... His clients included a defense contracting firm, the Carlyle Group, and troubled financial firms - Merrill Lynch and Wachovia. ... Some of the senators may be asking about disclosures that Panetta has filed with the Office of Government Ethics detailing his paid posts on a number of corporate boards, including BP Corp., and money made in speeches for Merrill Lynch and Wachovia - part of the $1.2 million he made from clients, firms and investments last year. Panetta, a former California congressman, reports assets of up to $3.7 million. ... He collected $120,000 in director's fees from BP and also from Fleishman- Hillard Inc., a St. Louis-based public relations firm that registered to lobby for about 40 clients last year. The firm, whose advisory board includes former House Speaker Newt Gingrich and former Homeland Security Secretary Tom Ridgee, clients -- in person, via video or through calls to decision- makers.' But Bill Black, senior partner in the Washington office, told Bloomberg News that the board members aren't asked to do any of that. 'I don't know of any instance he was asked to make a call on behalf of a client,' Black said of Panetta. He said Panetta is 'just kind of available to us for advisory purposes. He does a lot of kind of internal stuff. ... Some of Panetta's speaking and consulting fees came from troubled banks and an investment firm that owns companies that do business with federal security agencies -- a $28,000 honorarium from the Carlyle Group. A Carlyle spokesman, Chris Ullman, told Bloomberg that Panetta spoke at an annual investors' conference, 'which is unrelated to any of our portfolio companies,' such as Booz Allen Hamilton,, an intelligence contractor for the government. ... The White House doesn't sound very worried, however. Panetta's income and investments 'have been thoroughly reviewed by the Office of Government Ethics,' spokesman Tommy Vietor says. ... ''