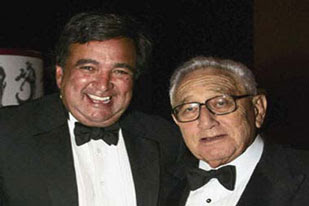 ... For years I've been investigating the second-most corrupt state in the USA (after Alaska). I like to check in on the enchanted state with my bud Santiago Juárez. I knew it was not a polite question, but it was really bugging me, so I asked him, “Exactly how does a Mexican get the name William Richardson?”

Governor Richardson’s dad, Santiago explained, was a Citibank executive assigned to Mexico City. There he met Governor Bill’s mom, and-milagro!-a Mexican-American was born. Richardson gets big mileage out of his mother’s heritage, and that makes him, legitimately, a Mexican-American, a politically useful designation. But it’s just as legitimate to say that Richardson is a Citibank-American.

But Governor Richardson is more than that. Between leaving Bill Clinton’s cabinet where he was Secretary of Energy and grabbing a Hispanic-district seat in Congress, Richardson became a partner in (Henry) Kissinger and Associates. That would make Richardson a Kissinger-American as well. ...

He is a member of the Inter-American Dialogue.

"He served as a member of the President's Cabinet and also a member of the National Security Council. Richardson is the first Hispanic to serve in a foreign policy cabinet level position. Previously, Bill Richardson served New Mexico's 3rd Congressional District, and was reelected eight times."

"As a member of the United States Congress, Richardson held one of the highest ranking posts in the House Democratic Leadership, serving as Chief Deputy Whip."

"Richardson was nominated for the Nobel Peace Prize for the second time in January 1997. As a diplomatic 'trouble shooter', he has worked to free hostages and prisoners in several countries including Burma, Cuba, Iraq, North Korea and the Sudan."

"Richardson was dispatched by President Clinton to Central Africa, where he successfully brought together former Zairian President Mobutu and Alliance leader Kabila for their first meeting."

"Richardson received a B.A. (1970) from Tufts University and an M.A. (1971) from the Fletcher School of Law and Diplomacy. In addition, he has received a number of honorary degrees and has been presented with many honors and awards during his career. ... "