Abstract: The Murder of Theresa Duncan 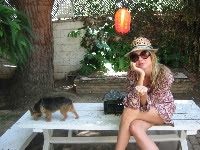 ABSTRACT: After Theresa Duncan's alleged suicide, a smear campaign was waged. We are to believe that she and Jeremy Blake were stereotypical "paranoid conspiracy theorists" who feared Scientology stalking to the extent that Duncan, a professional "failure," was driven to take her own life. Jim Cownie, however, is not a conspiracy theory. He is the founder of Heritage Communications, which Rupert Murdoch has vested interests in - now known as AT&T Cable Systems. Cownie hails from Des Moines and the Warren Buffet circle of investors, also the CIA's Operation Mockingbird, a status he shares with his business partner, Rupert Murdoch, who, in Australia, pooled interests with Peter Abeles, a CIA-Mafia kingpin. The pair were

focal points in a number of suspicious "suicides" and murders. Cownie has been tied - BY THERESA DUNCAN - to The Franklin Cover-Up and attendant child sexual slavery network ... which also came with a number of unexplained "suicides," fatal accidents and murders. The classic defense against allegations of a whistle-blower like Theresa Duncan is to denounce her as "crazy," her charges "conspiracy theories," and this is exactly what Kate Coe, a Rupert Murdoch shill, did in her smear piece published by the LA Weekly. She depicted Theresa Duncan and Jeremy Blake as crazed paranoiacs, operating on the assumption that there was no substance to Duncan's "theories." In fact, Theresa was investigating Operation Mockingbird's child prostitution connections, and was murdered for it. Kate Coe's defamations and Murdoch's media manipulations constitute the cover-up of her murder. The police, by the way, did not rule out foul play and did not even rule her death a suicide officially - yet the word "suicide" was immediately used without reservation by Murdoch's reporters and other Mockingbird fronts, driven repetitively into the public's head by Murdoch's operatives in the media, though they don't advertise this fact. Full details:

How is Coe a Murdoch shill? You keep saying that but she doesn't work for Fox. A Current Affair was cancelled a few years back, and her current imdb lsiting has her working for Larry Charles(who directed Borat, for those who don't nkow). She's never worked for any tv news outlet, as far as I can tell.
Yuo wouldn't want to get the reputation for not being very accurate, would you?