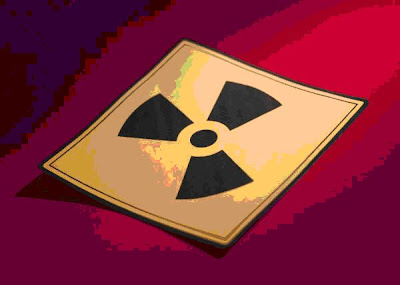 Via Pamela by way of Larwyn, Radioactivity at accident site in Jersey City? Conflicting reports...

13 August 2007: A minor accident that took place at Hoboken and Summit Avenues in Hoboken, New Jersey Sunday night - a mere 6-mile drive from the Empire State Building in Manhattan prompted the response of police to the scene as the driver of one of the vehicles fled on foot after the accident.

But the police were summoned for another reason – the vehicle from which the suspect in the hit-and-run fled contained a “box” in the trunk containing “radioactive” symbols. According to a law enforcement source close to the Northeast Intelligence Network interviewed shortly after 5:00 this morning, sensors carried by police that measure radioactivity sounded an alarm that indicated higher than acceptable levels of radioactivity, prompting a response from HAZMAT and other officials. Police, fire and HAZMAT officials established a safe perimeter around the accident scene, and the driver of the car containing the box or device emitting radioactivity was caught several blocks from the scene.

This event took an unusual twist, however, when Fox Channel 5 news reporter from New York City was reporting live from the scene. As he was describing the event, a voice coming from the reporter's ear piece was picked up by his microphone: "TELL THEM NO RADIOACTIVITY" was the message clearly heard as isolated as a sound file HERE. Viewers can clearly see the befuddled reaction by the news reporter to the message from his ear piece in the video clip below, and the confused response to the complete change of information by the television anchor.

[Fausta's Blog post is supplemented by the remainder of the report, and a video of the Fox newscast. - AC]
Posted by Alex Constantine at 6:50 AM