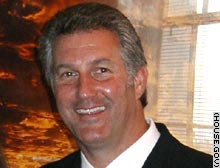 Rick Renzi, a three-term Republican U.S. House member from Arizona, announced Thursday that he will retire at the end of the 110th Congress and will not seek re-election in 2008.

Renzi’s announcement ended months of speculation about his status, sparked by a pending federal investigation into his family’s business practices. Though Renzi has denied wrongdoing, an FBI raid in April on a business owned by his wife cast a cloud over his political future and prompted him to surrender his committee assignments ahead of what would have been strong pressure from House Republican leaders to do so.

Questions about Renzi’s 2008 intentions intensified when he reported weak fundraising for his House campaign committee. Renzi, according to his latest filing with the Federal Election Commission (FEC), raised only $184,000 in the first six months of this year, putting him in the bottom third of all candidates who have filed with the FEC to run for the House in 2008. ...

Jennifer Crider, a spokeswoman for the Democratic Congressional Campaign Committee (DCCC), said in a statement that Renzi was “following the Republican Conference corruption playbook” used by former Reps. Bob Ney of Ohio and Randy “Duke” Cunningham of California during the run-up to the 2006 elections. Both of those Republicans first announced they were retiring from Congress, but later pleaded guilty to federal corruption charges and resigned their seats. ...

NRCC chief Cole warned that Democrats looking to win the seat would have to “answer for the liberal agenda of Nancy Pelosi” — the House Speaker from California — “and the low approval ratings of the Democrat-led Congress.” ...

The ethics controversies that Renzi has been forced to deflect expanded just months after he survived a 2006 election in which Democrats tried to tie him to an overall “culture of corruption” they blame on the Republicans who then controlled Congress. Their efforts were unsuccessful, as Renzi defeated Democratic lawyer Ellen Simon 52 percent to 43 percent. Simon considered a second try in 2008, but announced earlier this year that should would not run.

No one answered the phones at Renzi’s office in Washington, D.C., or his district office in Flagstaff, Ariz., after hours Thursday.

Josh Marshall: So it looks like Rep. Rick Renzi (R-AZ) is tied up in the US Attorney Purge scandal after all. And the AP has the story.

This gets a bit complicated but here goes.

Purged US Attorney Paul Charlton was talking to House investigators this afternoon when he made an important revelation. Weeks before election day 2006, word leaked to the press in Arizona that Charlton's office was investigating Renzi. Renzi's top aide Brian Murray then called Charlton's office and asked Charlton's spokesman, Wyn Hornbuckle.

Unlike what happened with David Iglesias, Charlton's chief investigator did report the contact to the Department of Justice, as DOJ regs dictate.

Now, here's the key: after all Congress's document and information requests to DOJ, the Justice Department had not revealed the Renzi-Charlton contact. For some reason, they've held that back.

"Reports that I called Wyn Hornbuckle, press secretary to Paul Charlton are true. I called Mr. Hornbuckle seeking information about press accounts which appeared just weeks before election-day, alleging a pending indictment. I left him a message asking for information about these allegations, but I was called back and told they would not comment."

So basically what we have here is a classic scandal harmonic convergence - new nuggets about the Renzi scandal and the revelation that another of the US Attorney firings may be tied to an investigation of a Republican lawmaker. At a minimum, the DOJ has concealed critical information about the story.

Ever the enigma. Ever distant. Ever someone oddly apart from the state he was elected to represent.

Such is the Rick Renzi that few in Arizona could really claim to know well.

He seemed competent enough in his early years as a Republican representative of Arizona's sprawling 1st District, despite clearly maintaining far tighter ties to Virginia than to this state.

But slowly, the wheels began parting from the axles. Allegations of familial conflicts of interest. Murky land deals. Dubious campaign finances. And few answers for any of it. Then, the FBI raided his family business in Sonoita and, suddenly, from the smoke of obscurity that always seemed to surround him, harsh sparks began to fly.

Renzi announced Thursday that he will not seek election to a fourth term in 2008. To anyone with a view of his trajectory in recent months, it comes as no surprise. It also comes with no explanations. Yet another non-surprise.

As always, one can only guess at Rick Renzi's motivations.

Earlier this year, two significant irregularities surfaced regarding Renzi's conduct as a member of Congress.

The first involved campaign-finance problems with the Federal Elections Commission regarding his first campaign in 2002. He resolved that issue - or seemed to; who knows with this guy? - by paying over $320,000 in back personal taxes on income he had not reported previously. If nothing else, the complex money-juggling suggested Renzi had a thing for masking reality by mixing different pots of cash.

His taste for murky financial complexity became most evident, however, in the deal that appears to have done him in: the sale of a 480-acre parcel of land in Cochise County that Renzi actively urged from his post as a member of the House Natural Resources Committee. Through a spokesman (as always) Renzi insisted he had no idea the property was owned by a former business partner who owed him $200,000. Of course he didn't.

That last scandal bubbled up in May. Since then, the already-reclusive congressman truly began fading away. He resigned from one congressional committee. Then another. Rumors circulated that Republican House leaders were urging him to step down. And, fairly considered, there seems little point in Renzi sticking around.

It may not be much of a political epitaph, but it is worth noting nonetheless that to date, at least, Renzi has not been charged with wrongdoing. He corrected his issues with the FEC. And despite the plumes of smoke rising from his real-estate manipulations and FBI investigations, no indictment has been dropped.

If we knew the fellow at all, we might wish him well.

http://www.azcentral.com/arizonarepublic/opinions/articles/0824fri1-24renzi.html
Posted by Alex Constantine at 11:51 AM