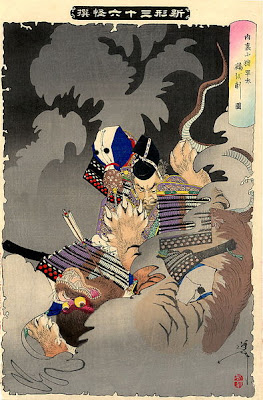 "Travis Gruber," a general's aide, is under investigation for advocating fascist-style mass murder on the Internet: "'I, honestly, would like nothing more than to assist in the wholesale slaughter of every idiot on the face of the planet,' Senior Airman Travis Gruber of Sacramento writes on the site. In other postings and in a related blog, Gruber denigrates African-Americans, Jews, Asians, women, gays and people with physical handicaps. ... " - Contra Costa Times (see below).

There is a serious but undiagnosed personality disorder commonplace in American society that begs recognition, doesn't properly exist to be addressed by the social sciences unless a name calls attention to it, so it is imperative that it be included in standard APA terminology: Americanitis. (Paul Robeson, Jr., in a speech before the Black Congressional Caucus a few years ago ((I was there as a member of the Caucus "Brain Trust" (((and collected numerous askance glances in DC, where the racism is palpable, when I happened mention it, but that's another story))))) identified the disorder as a "European" affliction, meaning Caucasion. But it seems to me unfair to blame the Old World for a domestic disorder in the next one, so I call it Americanitis.)

Sufferers are not difficult to diagnose. In fact, they often cry out for help, boast of their violent impulses - but mimimize them, confuse them for an acceptable form of "humor," as if proud of them because bellicosity is identified consciously as a seminal American trait. So violence is something to wear on the sleeve, like a pair of flag cuff-links. This identification with authority cancels out normal feelings of compunction and shame.

They would turn the violence on themselves if psychological projection did not determine the perception of easily identifiable scapegoats. Some of the afflicted find a release in talk radio.

The many contradictions in their thinking lead to utter confusion, but they push on against the tide of "poltical correctness," the observance of social forms that constrain the mentally healthy (that's an ironic statement, I know, but the sane are limited in the exercise of will because they are generally forced to accede to social pressures, whereas the mentally unstable are "liberated" to act and speak any way they please), even more publicly, as if they had a coherent, self-evident message to convey, because rage addiction always seeks an outlet, but cannot articulate the causes of confusion or separate reality from the triggers that lead them to fantasize of committing serial murder, a sub-condition of Americanitis, or even the moral ramifications of their statements. They tend to be morally insane and difficult to treat because the process that led them into the personality disorder is not a rational one, so rational argument does not reach them in this dissociative state. As it happens, bloody fantasies are a precursor to serial killing, so those with the disorder are potentially quite dangerous. Americanitis sufferers often make statements like this one from the blog of "Travis Gruber":

If you're coming here from the Contra Costa Times article or the associated press story; this is the entirety of the statement that I released to the author of the article.

This website is comprised of my personal thoughts, feelings and sense of humor and as such does not reflect the thoughts or opinions of The California National Guard, The California Air National Guard, The United States Air Force or any of the commanding officers that represent those organizations. I was under the impression that I was writing anonymously and in that writing I have never mentioned my relation to any of those organizations due to the nature of my opinions. How Mr. Peele acquired that information is beyond me.The purpose of the website is political satire, social commentary and an outlet for my opinions. In no way, shape or form do I condone acts of violence or aggression and this website is not a learning tool for those activities. Certainly some may find the sense of humor and opinions represented here as dark and distasteful; and that may very well be. However it is my sense of humor and these are my opinions alone. I'm sorry if I have misrepresented or left a black mark on the California Military Department, The California National Guard or The United States Air Force. I have the utmost respect for all of these organizations and would not want my website or opinions to tarnish their good names.

This website will remain down during the course of the investigation. I hope everyone understands and will continue with their support. Hopefully everything will be back soon.

Thank you very much.

If you would like to contact me for any further information my email address is htkpeeps at gmail.com.

The California National Guard placed on leave the personal assistant to its top general on Wednesday and launched an investigation hours after the Times questioned a Web site he maintains called "Howtokillpeople.com" that advocates mass violence.

"I, honestly, would like nothing more than to assist in the wholesale slaughter of every idiot on the face of the planet," Senior Airman Travis Gruber of Sacramento writes on the site. In other postings and in a related blog, Gruber denigrates African-Americans, Jews, Asians, women, gays and people with physical handicaps.

Until Wednesday, Gruber was the personal assistant and driver to Major Gen. William Wade, the Guard's commanding officer. The job gave Gruber access to the state's leaders, such as Arnold Schwarzenegger, whom he trashes in a posting that questions the governor's intelligence. Military law forbids soldiers from using "contemptuous words" about civilian leaders.

Gruber, who says on the Web site that he's 26, does not identify himself in his postings as a National Guard member, nor does he mention Wade by name, but he refers to his boss as "the big guy." He makes references to a job that allows him occasional access to the governor and others.

Gruber blogged that when once ordered to drive "the big guy" to Oakland earlier this year, he loaded a shotgun with extra shells and filled a pistol "to the brim with hollow-point" bullets because he feared entering the city unarmed.

In a separate Web posting, he wrote of a woman who once approached him with a question as he waited for Wade at the state Capitol and that he later regretted not "crushing her windpipe" and slamming his car door into her legs for bothering him.

After learning of the Web site Wednesday, the Guard placed Gruber on paid administrative leave pending the outcome of an investigation, said Lt. Col. Jon Siepmann, a spokesman.

Investigators will "look into the content of the Web site and make a determination into whether any of it is a violation of military law and regulations," Siepmann said.

Gruber, in a statement Siepmann issued, said he is "sorry if I have misrepresented or left a black mark on the California Military Department. I was under the impression that I was writing anonymously."

In the statement, he said that he does not "condone acts of violence or aggression." He called his sense of humor "dark and distasteful."

Despite its name, the Web site contains no instructions on how to kill people. Rather, much of it is dedicated to social commentary, vulgar humor and sex jokes. The site contains several pictures of Gruber holding what appear to be automatic weapons, including one of him pointing a gun at black people in tribal garb.

Three former California National Guard officers, including a retired commanding general, said Gruber should be immediately removed from the job and questioned how he was selected for it in the first place.

Wade should "deal with it humanely and get this man the help he obviously needs," said retired Gen. Frank Schober, who commanded the National Guard under former Gov. Jerry Brown.

"I don't know if he should be court-martialed," Schober said. The Web site "seems so far out there. But we certainly don't comment on the governor publicly. We don't do that."

Gruber posted a picture of the governor with a topless woman and wrote that if Schwarzenegger is capable of running state government, then he wanted to run for the job. Gruber also posted a fake Internet conversation with the governor in which he uses profanity to describe Schwarzenegger.

In another posting, U.S. Sen. Barbara Boxer's face is superimposed on the body of a man in tights with the description "depraved sex-a-holic."

It is a crime under military law for a soldier, including an enlisted member of the National Guard, to use "contemptuous words" against public officials, including governors and members of Congress, according to Schober and others.

Gruber also writes of meeting the governor's wife, Maria Shriver, through his job. In a posting titled "In Honor of Mother's Day," he wrote of Shriver:

"Could you imagine waking up, as a child, to the gaping maw of this demon?"

Being an aide and driver to the top general "is a very influential job and a job that leads to rapid promotion," said William Wenger, the former commander of the state Army National Guard.

Aides such as Gruber are privy to confidential information and conversations on a daily basis, which makes it a potential security threat for "a loose cannon like (Gruber) to have the job," Wenger said.

"The question has to be asked why an individual with this type of access wasn't vetted more," Wenger said. "He would be privileged to a lot of confidential information and conversations. He might be asked his opinion on important matters."

Siepmann said Gruber had the job as Wade's assistant for more than a year. Siepmann could not say Wednesday what the screening process for the job was.

Russ Smith, a retired colonel who served in both the California Guard and the U.S. Army, and who was wounded in Iraq in 2005, said the violence that Gruber writes about "should be a red flag to anyone in the security business. I am genuinely concerned for the safety of (Wade) and any VIPs whom this individual may encounter."

Military analyst John Pike of Globalsecurity.org, a Web site dedicated to military issues, said even if Gruber's writings about violence were a poor attempt at humor, they raise serious questions about his judgment.

"If he does not have the good sense on this, what else doesn't he have good sense about?" Pike said. "You don't want this type of person to be in a general's traveling party."

Pike said that military law forbidding soldiers from making derogatory comments about elected leaders are based on "the fundamental premise of keeping the military out of politics. Military people do not have any business exercising public contempt of civilian authority," Pike said.
Posted by Alex Constantine at 9:46 PM

I'm sorry but you're completely wrong about Travis. I've known him for 8 years and he wouldn't hurt a fly. He's a big sweetheart of a guy who would give his friends the coat off of his back. The website is SATIRE, its just humor. He's not an angry person, thats seriously the very last word I would use to describe him. His humor is dark and veery distasteful and I often shake my head at him and tell him "shame on you!"...but thats it, humor, he wouldn't hurt a damn fly. Everyone just needs to calm down, this is ridiculous.