In Dreams Begin Responsibilities: Sartre in the Fascist Context 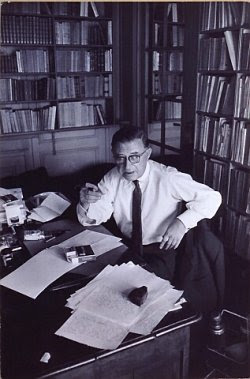 "Fascism is not defined by the number of its victims, but by the way it kills them." - Jean-Paul Sartre

"Sartre's view of responsibility developed when fascism was coming into power. France was conquered by Hitler's Germany. People chose between collaborating with fascism or resisting it. Pacifism was a form of collaboration.

"Sartre's mother belonged to the prestigious German family of Albert Schweitzer. Sartre was drafted into the French army and captured by the Germans. In 1941, after nine months as a prisoner of war, he was released. He began working against the German occupation and was disappointed with the behavior of some of France's prestigious intellections, André Gide

and André Malraux among them. It was the Marxists who were most active in the struggle against German occupation - after the Jews they were the most persecuted. Sartre was a man of the political left and anti-fascist while rightists and churchmen were collaborating with Hitler. ... "

The Wave of the Future 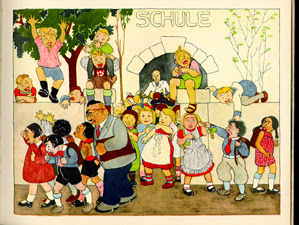 " ... From the early 1930s to the early 1940s, the left was totally destroyed in most of Europe (Germany, Italy, Russia, Spain, Hungary, Japan, Poland) or reduced to a shell of its past influence (France, Norway) or isolated from the main centres of power (China, Indochina) or coopted into imperialist regimes (Britain, us). Tens of millions of workers, peasants and others were killed; hundreds of millions were ruled by bloody tyrants who allowed not even elemental class organisations. There were theorists then, on both the right and left, who saw the new rising fascist or "bureaucratic" power (Burnham) as "the wave of the future" (Lindbergh), impregnable and all-powerful.26 Some intellectuals turned toward philosophic and literary exercises in the occupied areas (Sartre, Camus). Fascism and imperialism surged from the capitalist economic crisis of the East and West and the passivity of the left. Social democrats in Germany and Austria offered to share power with the Nazis until they were physically driven from office, some jailed, others exiled, a few remaining in Germany unmolested. ... "