Police to use terror laws on Heathrow climate protesters 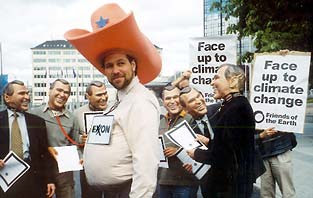 " ... Cristina Fraser, a student, was stopped when cycling near the airport with a friend and then charged under section 58 of the Terrorism Act. This makes it an offence to make a record of something that could be used in an act of terrorism. ... "

Armed police will use anti-terrorism powers to "deal robustly" with climate change protesters at Heathrow next week, as confrontations threaten to bring major delays to the already overstretched airport.

Up to 1,800 extra officers will be drafted in to prevent an estimated 1,500 people disrupting the airport over the period of the camp for climate change, which is due to begin on Tuesday. The police have been told to use stop and search powers against the protesters, who have pledged to take direct action on August 18 and 19 but not to endanger life.

The Metropolitan police chief, Sir Ian Blair, has said he fears a minority of protesters intent on breaking the law could cause massive disruption as Heathrow prepares for its busiest week of the year. Yesterday Met commander Jo Kaye, in charge of the specialist firearms unit, said some people would "want to get their message across using criminal means".

Scotland Yard's plans for handling the protests are revealed in a document seen by the Guardian, which was produced by Met commander Peter Broadhurst during a legal hearing at the high court which imposed restrictions on a number of named campaigners.

"Should individuals or small groups seek to take action outside of lawful protest they will be dealt with robustly using terrorism powers. This is because the presence of large numbers of protesters at or near the airport will reduce our ability to proactively counter the terrorist act [threat]," the document says.

The police report makes it clear that the government has encouraged police forces to make greater use of terrorism powers "especially the use of stop and search powers under s44 Terrorism Act 2000".

The law gives police powers to:

· Hold people for up to a month without charge

· Search homes and remove protesters' outer clothes, such as hats, shoes and coats.

Last night the protesters said they would not be intimidated. "We are trying to prevent climate change by stopping the expansion of the airport. There is no intention to endanger life. Our quarrel is not with passengers but with BAA and the government," said a spokesman.

The civil rights group Liberty said it was alarmed at the police use of the anti-terrorism powers to deter peaceful protest. "Stop and search powers created to address the threat of terrorism should not be used routinely against peaceful demonstrators," said James Welch, Liberty's legal director.

The police tactics have echoes of the 2003 anti-war demo at RAF Fairford where law lords eventually ruled police had acted unlawfully in detaining two coachloads of protesters, who were stopped and searched and then turned back even though they were on their way to an authorised demonstration. Police used section 44 of the act 995 times at the Fairford peace camp, even though there was no suggestion of terrorist overtones.

The Guardian has established that at least two climate change campaigners have been arrested recently at Heathrow by officers using terrorism powers. Cristina Fraser, a student, was stopped when cycling near the airport with a friend and then charged under section 58 of the Terrorism Act. This makes it an offence to make a record of something that could be used in an act of terrorism.

Cristina Fraser, a student, was stopped when cycling near the airport with a friend and then charged under section 58 of the Terrorism Act. This makes it an offence to make a record of something that could be used in an act of terrorism.

"I was arrested and held in a police cell for 30 hours. I was terrified. No one knew where I was. They knew I was not a terrorist," she said.

Ms Fraser, a first-year London university anthropology student, has been on aviation demonstrations with the Plane Stupid campaign group, but claims she was carrying nothing at all. The police later recharged her with conspiring to cause a public nuisance.