Poisoned city fights to save its children 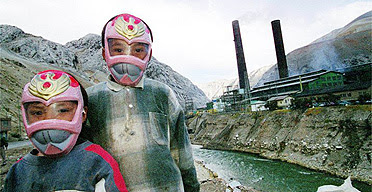 At an altitude of 13,000ft the Andean air is clear. A plume of white smoke rises from the chimney at the La Oroya smelter, hard at work refining arsenic and metals such as lead, cadmium and copper. But today the company is not discharging any gases over this city in central Peru. 'It's a nice day, so the company won't be letting off any gases,' says Hugo Villa, a neurologist at the local hospital. 'They keep the worst emissions to overcast days or after dark.'

When the gases are released, they make this one of the most polluted places on the planet, with La Oroya ranking alongside Chernobyl for environmental devastation, according to a US think-tank, the Blacksmith Institute.

The company is a US corporation, Renco Doe Run. The gases are the product from the main smelter a mile or two down the valley. The high mountains around keep out the cleansing winds, meaning that airborne metals are concentrated in the valley. Neither humans nor nature can escape the company's outpourings of poisons. And, despite evidence that gases have been behind the premature deaths of workers and residents young and old, the business-oriented, pro-US government of President Alan Garcia is too afraid of foreign investors to do anything about it.

Now, however, the townspeople, once muted by their worries about losing their jobs with the valley's biggest employer, are turning their attention towards Ira Rennert, Renco's proprietor.

The pollution from his plants appears both horrific and difficult to contest. A study of 93 newborn children in the first 12 hours of their life, conducted by Hugo Villa, showed they had highly dangerous levels of lead in their blood, inherited from their mothers while in the womb. The nearer the mothers lived to the main smelter, the higher was the babies' level of lead poisoning.

'The effects of the lead are often difficult to trace,' said Villa. 'But it lodges permanently in bones and affects the liver, kidneys and the brain. It affects the central nervous system. I've had child patients who have lost feeling in their limbs and can't control themselves.'

The quality of air sampled in the neighbourhood by three Peruvian voluntary agencies showed 85 times more arsenic, 41 times more cadmium and 13 times more lead than is safe. In parts of the town the water supply contains 50 per cent more lead than levels recommended by the World Health Organisation. The untreated waters of the Mantaro river are contaminated with copper, iron, manganese, lead and zinc and are not suitable for irrigation or consumption by animals, according to the standards supposed to be legally enforced in Peru. The water coming out of the nearby Huascacocha lake contains more than four times the legal limit of manganese.

It is no surprise, therefore, that the town has more than its fair share of youngsters with physical or mental disabilities. The company has a scheme under which a few hundred carefully selected children of Doe Run employees are taken for a few hours every day to a camp outside the town. With less money, the town council is trying to do something similar for children whose parents do not work for the company. None of this bears on the main problem - the pollution from the refineries. The problem here is such that adults chat about the lead levels in their blood.

For years the Oroyinos, as the locals are called, appeared to put up with their lot. In the past, union leaders and the mayor were persuaded by Renco Doe Run to side with it to block, successfully, the government's feeble attempts to force it to reduce pollution. 'We may move out, and you'll all lose your jobs, was the message,' said Pedro, one former employee, now an invalid. 'It was a question of deciding whether to have enough food to eat or not.'

This year it is different. The town has elected a new mayor, Cesar Rodriguez, and the unions elected new leaders; and the effects of the pollution on children is finally getting through to parents.

Rennert's record as a polluter is not confined to Peru. For nearly 13 years, according to industry reports, the company topped the US Environmental Protection Authority's list as the worst air polluter in the country.

* A US-owned smelter in the city of La Oroya makes the city one of the most polluted in the world.

* Evidence suggests gases from the smelter have been behind the premature deaths of workers and residents young and old.

* In parts of the town, the water supply contains 50 per cent more lead than levels recommended by the World Health Organisation.

* A study of 93 newborn children in the first 12 hours of their life showed they had highly dangerous levels of lead in their blood, inherited from their mothers while in the womb.