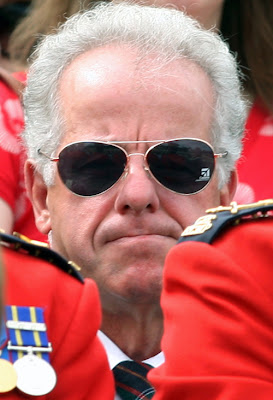 TORONTO, OTTAWA — The civilian appointed to lead Canada's national police into a new era of accountability revealed Friday he was among the secret group of bureaucrats who had met to censor findings of
the Maher Arar report.

“I was certainly involved in the process leading to that decision, but that decision was a decision taken by government,” RCMP Commissioner William Elliott, wearing a business suit, told reporters after the RCMP's change-of-command ceremony. He was referring to work he had done while serving as an associate deputy minister to Public Safety Minister Stockwell Day.

The government broke with Mountie tradition to choose the career bureaucrat for the top job, in an apparent attempt to distance the RCMP from recent controversies like the Arar affair, which forced the resignation of
Giuliano Zaccardelli.

Mr. Elliott insisted Friday that “a number of improvements have already been put in place, but there's more work to be done.”

Mr. Elliott directly addressed concerns that were revealed to the public on Thursday, when previously censored portions of the Arar report were disclosed.

The new information showed that RCMP officers had provided misleading information to a judge when seeking a warrant and had entered into problematic relationships with Syrian military intelligence and the U.S. Central Intelligence Agency.

“And yes, better and more complete and accurate affidavits to go before judges.” Despite his assurances, there were vocal concerns about unknown Canadian security officials who recommended blotting out seemingly embarrassing information by claiming national security is at stake.

“Given what we now know about what they are trying to suppress, it's obviously a concern that the person who is now accountable for the RCMP took such a limited view of the public's right to know about the errors and
mistakes committed by the force,” said Lorne Waldman, a lawyer acting for Mr. Arar.

Most of the fallout from the affair – which involved an inconclusive RCMP investigation that briefly touched upon Mr. Arar before U.S. authorities detained him as an alleged al-Qaeda member and sent him to Syria for
interrogation – occurred last fall.

But because the government had censored references to many of Canada's intelligence exchanges with the United States and Syria, the disclosures released this week prompted renewed interest in the scandal and in official
secrecy.

“The fact that the new RCMP commissioner appears to have been involved in this process is going to pose a challenge to him as he tries to demonstrate that he's turning a new page at the RCMP,” said NDP Leader Jack
Layton.

Liberal Leader Stéphane Dion said in an interview that “the key point for me today is not Mr. Elliott, it is which ministers decided on this unacceptable level of transparency for the Canadian people.”

A spokeswoman for Mr. Day, the past and current boss of Mr. Elliott, said “senior officials from various departments” decided to block out the passages before the government signed off on the recommendations.

Some security officials says there is no great mystery as to why such references were blacked out: Foreign intelligence is not viewed as fundamentally different from any other borrowed good or service. For that reason, Canada is wary of passing along secrets it gets from other sources, or even pointing to those sources.

“If you borrow your neighbour's pickup truck to haul a load to the dump, you don't give the keys to the kids to go for a Slurpee at the 7-Eleven,” said one official who declined to be identified. “Intellectually, it's not a difficult
concept to grasp.”

Canada has no dedicated foreign intelligence service and is somewhat beholden to the goodwill of allies. One RCMP inspector testified recently that the Mounties export one nugget of that security intelligence for every 75
tips they import. For that reason, keeping the goodwill of partners like the United States is seen as paramount.

But censors often use these reasons as pretexts to invoke too much secrecy, critics say. “If you're a government bureaucrat, you have an institutional interest to protect,” said Paul Cavalluzzo, counsel for the Arar commission,
which spent years battling for disclosure.

He said that the unknown officials who wanted to shield the government from embarrassment failed – badly.

“Probably if this information had come out when Justice [Dennis] O'Connor wanted it to, some of this stuff would have been buried. Now it's front-page news. Again.”

http://www.theglobeandmail.com/servlet/story/RTGAM.20070811.warrar11/BNStory/National/home
Posted by Alex Constantine at 3:17 AM