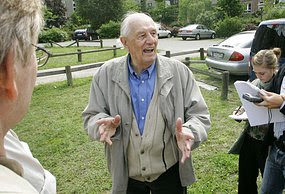 The last living witness to the final hours of Adolf Hitler, the Nazi leader's personal bodyguard Rochus Misch, has turned 90 but vowed to keep his secrets to himself, a report said.

Mr Misch was 27 when he left Hitler's bunker on May 2, 1945 as Soviet troops stormed the chancellery in Berlin, two days after the Fuhrer killed himself with a gunshot to the head, Spiegel Online reported.

He has kept quiet on who killed Hermann Fegelein, who was married to the sister of Eva Braun.

According to Mr Misch, Hitler did not give the order to shoot Fegelein, contrary to the findings of German historian Joachim Fest. He said the representative of the commander of Hitler's personal guard gave the order.

"I know it from an officer from the Reich security service whose colleague shot Fegelein," Mr Misch told Spiegel Online. "I know his name, but I am keeping it for myself."

Fegelein was the liaison officer between Hitler and Heinrich Himmler, the head of the SS, and left the bunker without authorisation on April 27. He was shot on April 29.

Mr Misch, who lives in Berlin, has written a book called I Was Hitler's Bodyguard, which is due to appear in Germany later this year.

It has already been published in South America, Japan, Spain, Poland and Turkey, Spiegel Online reported.

Only a moron would blacklist Misch, He was only a telephonist and a bodyguard to Hitler. Grow up.