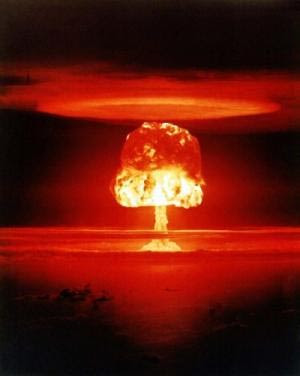 NEW YORK Today's front-page story by Peter Baker in The Washington Post giving prominent play to an article in The Atlantic ripping a former Bush speechwriter might not seem so unusual except for the fact that the subject is now a columnist for that newspaper and sister publication, Newsweek. The Atlantic piece blasts Michael Gerson and was written by one of Gerson's former White House speechwriting colleagues, Matthew Scully.

The article suggests that Gerson took far too much credit for penning some of the most famous lines of the Bush presidency, but the Post does not mention that he apparently is still on the hook for one of the most egregious and influential phrases of all.

According to the recent book Hubris by Mike Isikoff and David Corn, Gerson played a central role in spinning one of the false “WMD scoops" in 2002 that The New York Times has tried to live down ever since. That article, by Judith Miller and Michael Gordon, appeared on Sept. 7, 2002, six months before the invasion of Iraq, and was quickly cited by Vice President Cheney and other administration leaders. 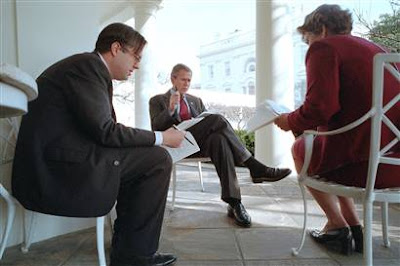 Photo: GW Bush prepares for his State of the Union address with Karen Hughes and speechwriter Michael Gerson in January 2002

Isikoff and Corn assert that it was Gerson who conceived the “sound bite” that Iraq’s alleged nuclear program could not be absolutely proven but “the first sign of a smoking gun might be a mushroom cloud.”

Gerson, they write, was a member of the influential White House Iraq Group (WHIG) and within that group his "vivid metaphor, an administration official later said, perfectly captured the larger point about the need to deal with threats in the post-September 11 world.

The original plan had been to place it in an upcoming presidential speech, but WHIG members fancied it so much that when the Times reporters contacted the White House to talk bout their upcoming piece, one of them leaked Gerson’s phrase—and the administration would soon make maximum use of it.”

When the Miller-Gordon piece appeared, it was topped with the headline, “U.S. Says Hussein Intensifies Quest for A-Bomb Parts.” It also included, as it turned out, numerous false claims from defectors about Iraq’s chemical and biological weapons. But one phrase jumped out. Unnamed administration officials were worried that “the first sign of a ‘smoking gun’ might be a mushroom cloud.”

It then gained even wider currency when, the same day, Vice President Cheney appeared on “Meet the Press,” cited the Times story and the “very clear evidence” in it about Iraqi WMD. National Security chief Condoleezza Rice then said the same thing.

The book also reveals that Gerson also played a key role in inserting references to the now-discredited “Niger” uranium/yellowcake link in various Bush speeches, including (famously) in the State of the Union in 2003. He also played a part in preparing Secretary of State Colin Powell’s crucial, deeply misleading, speech to the United Nations a few weeks later.

Gerson appears in another passage in the book. After the invasion of Iraq turned up no WMD, he allegedly returned from a senior staff meeting and told a colleague “that some White House officials were insisting it didn’t matter whether any weapons were actually found – so long as the war was viewed as a success. They were wrong, Gerson said. It mattered for the president’s legacy.”

The Post article today opens: "He has been hailed as the best White House speechwriter since Kennedy's Theodore Sorensen, the muse behind President Bush's most famous phrases, the moral conscience of the West Wing. But now Michael J. Gerson is accused by a former colleague of taking credit for words he did not write.

"According to Matthew Scully, who worked with him for five years, Gerson is not the bard of Bushworld but rather a 'self-publicizing' glory hog guilty of 'foolish vanity,' "sheer pettiness' and 'credit hounding.' In Scully's account, Gerson did not come up with the language that made him famous. 'Few lines of note were written by Mike,' Scully says, 'and none at all that come to mind from the post-9/11 addresses -- not even 'axis of evil.' "

"Scully's blistering portrait of one of the president's most prominent former advisers in the new issue of the Atlantic touched off an intense pushback by the White House yesterday as top Bush aides jumped to defend Gerson as the victim of a jealous associate."

The full article can be found at www.washingtonpost.com.