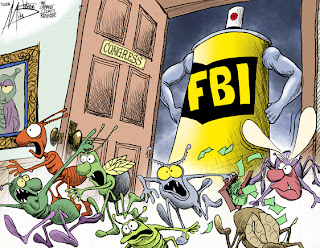 This past week, the Bush administration added insult to injury over its illegal program of NSA domestic surveillance. During the very time Congress was debating codifying President Bush's lawbreaking by revising the FISA law many of his allies had been afraid to publicly challenge as unconstitutional, Alberto Gonzales' DOJ was raiding the home of a former Justice official to identify the person who first brought the illicit program to light.

As Michael Isikoff details in Newsweek, a team of FBI agents raided the home of Thomas M. Tamm, a veteran prosecutor and former official of the Office of Intelligence Policy and Review (OIPR) within DOJ:

The agents seized Tamm's desktop computer, two of his children's laptops and a cache of personal files. Tamm and his lawyer, Paul Kemp, declined any comment. So did the FBI. But two legal sources who asked not to be identified talking about an ongoing case told NEWSWEEK the raid was related to a Justice criminal probe into who leaked details of the warrantless eavesdropping program to the news media. The raid appears to be the first significant development in the probe since The New York Times reported in December 2005 that Bush had authorized the National Security Agency to eavesdrop on the international phone calls and e-mails of U.S. residents without court warrants.

Even as Alberto Gonzales was feebly deflecting perjury charges by apologizing for "creating confusion" with his comments about "no serious disagreement" in 2004 within the administration over its NSA homeland spying scheme, the Attorney General was dispatching the FBI to investigate one of those purportedly disagreeable officials. At its worst, the campaign to punish NSA whistle-blowers reflect not only the administration's misplaced priorities, but its absolute commitment to seeking vengeance against its opponents:

The raid also came while the White House and Congress were battling over expanding NSA wiretapping authority in order to plug purported "surveillance gaps." James X. Dempsey of the Center for Democracy and Technology said the raid was "amazing" and shows the administration's misplaced priorities: using FBI agents to track down leakers instead of processing intel warrants to close the gaps. A Justice spokesman declined to comment.

After the revelations about the NSA program by the New York Times in December 2005, On December 19th, President Bush raged about what he deemed "a shameful act" that is "helping the enemy". Claiming he didn't order an investigation, Bush added "the Justice Department, I presume, will proceed forward with a full investigation" At a subsequent press conference that same day, Alberto Gonzales suggested the retribution that was to come:

The disturbing irony, of course, is that the vendetta against leakers by President Bush and his allies is highly selective. In 2003, Vice President Cheney famously authorized the cherry-picked declassification of elements of the 2002 Iraq NIE as part of a campaign to smear Ambassador Joseph Wilson over his public decimation of the White House's uranium in Niger canard. As the National Journal reported in April 2006, leak plugging stalwart and Kansas Senator Pat Roberts (then the Senate Intelligence Committee Chairman) leaked details regarding Saddam Hussein's whereabouts on March 20, 2003 even as the Iraq war was just underway.

And just last week, House Minority Leader John Boehner described classified details of the supposed "intelligence gap" created by a FISA judge's ruling, all in an effort to pressure his Democratic opponents to cave to President Bush's demands for expanded domestic surveillance authority.

Which, as it turned out, is exactly what came to pass. So while Congressional Democrats blinked by cowardly ratifying the lawlessness of an unpopular President and his Attorney General on life support, the White House continued its policy of payback - without blinking.

UPDATE 1: Several readers have already commented about PlameGate and President Bush's supreme hypocrisy when it comes to his selective crusade against leakers. As you might recall, a nonchalant President Bush had this to say about the person(s) who outed covert CIA operative Valerie Plame on October 7, 2003:

"I don't know if we're going to find out the senior administration official. Now, this is a large administration, and there's a lot of senior officials. I don't have any idea. I'd like to. I want to know the truth. That's why I've instructed this staff of mine to cooperate fully with the investigators -- full disclosure, everything we know the investigators will find out."
Don't expect that Vegas will start taking odds on a pardon for the NSA leaker...

UPDATE #2: Over at DailyKos, Ballerina X asks if the Thomas M. Tamm whose home was raided by the FBI last week is the same Thomas M. Tamm who commented at Media Matters on July 25th. There, Tamm identifies himself as a "former DOJ lawyer" and raises the issue of political interference inherent in Gonzales' blocking U.S. prosecutors from pursuing Congressional contempt charges.
Posted by Alex Constantine at 7:22 PM