Assassination Politics in the Sudan: The Murder of John Garang 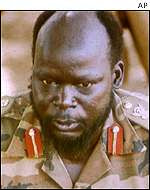 
THE ghost of John Garang is back to haunt Sudanese and regional politics, this time around with a bold declaration from Khartoum that the South Sudan leader was assassinated.

In an interview with the Sudanese Arab-language daily Akhbar Alyoum, an English translation of which was published online at www.newsudanvision.com on August 14, the Sudanese State Minister of Interior Aleu Ayeny Aleu suggests that the helicopter crash that killed Garang in July 2005 was an orchestrated murder plot and not an accident as the final investigation report claimed.

Mr Aleu also claims that Garang did not die in President Museveni's official helicopter but that he had switched aircraft at Entebbe on his way back to Sudan. He claims the fallen founder of the Sudan Peoples Liberation Movement/Army used a military chopper which then crashed due to bad weather and questionable piloting.

This is not the first time Garang's death is being attributed to foul play but is part of a growing appeal in South Sudan for a criminal investigation to be opened into Garang's death.

Until now the accepted version of the death was that Garang died after President Museveni's helicopter crashed with him on board following a meeting that the two held at the latter's country home in Rwakitura in western Uganda. All 13 people on board perished.

The interior minister, however, claims that a conspiracy of silence kept the real truth from the public. Yesterday, the Uganda government spokesman Kirunda Kivejinja said, "[Aleu] should tell us who murdered [Garang] so that we know."

He added that if Mr Aleu knows of a better method of discovering the truth he should come forward.

Mr Aleu was a member of the Sudanese group that was part of the international team that investigated the crash. Uganda was also represented on the team that had experts from the United States.

According to him, Garang was asked by Mr Bakri Hassan Saleh, the Sudanese presidential affairs minister, to use the official presidential plane for his flight to Uganda.

Mr Aleu claims the organisers of Garang's meeting, which included the Ugandan government and "three western ambassadors", convinced the Sudan establishment that they would provide him with transportation. He did not name the ambassadors.

One of the questions heavily debated in the aftermath of the helicopter crash, which also claimed the lives of the Ugandan crew and Garang's guards, is why the president of South Sudan and also first vice president of Sudan, did not fly an official aircraft as protocol requires. No explanation has been offered. He was just weeks old as Sudanese VP when he died.

Mr Aleu says that while the international report into Garang's death cited pilot error as the main reason for the helicopter crash, in truth matters were far worse.

"The information that was presented to our committee indicates that the pilot [Col. Peter Nyakairu] was previously demoted from his military ranks one day before piloting the plane carrying Dr. John Garang," Mr Aleu told the paper.

He says the committee, however, did not look into the circumstances under which Nyakairu had been allegedly demoted but instead says there was evidence that he was at odds with his flight crew. For example, the pilot allegedly disagreed with his crew after the helicopter was airborne.

Public information, however, shows that Nyakairu was not demoted but promoted well before the tragedy, a fact that could cast doubt on some of Mr Aleu's allegations.

That Mr Aleu is claiming foul play is not new. President Museveni first cast doubt on the accident theory just days after the fatal crash. He said he could not rule out the role of "external factors".

Last year, when a Shs7 billion cheque from the National Insurance Corporation was paid out as compensation money to the government, sources close to the presidency told this newspaper that Mr Museveni was still unconvinced that his comrade Garang died as a result of an accident.

President Museveni and Garang first met as politically inclined students in the late 1960s at the University of Dar es Salaam. Some of Mr Aleu's allegations have a familiar ring. He claims in the interview that the helicopter was not airworthy adding that some Ugandan security agents were inexplicably on board.

His other claims are, however, fresh and cast a long shadow on Garang's death. Mr Aleu claims that the real presidential chopper was switched with another plane which explains the poor condition of the helicopter that crashed.

According to him, when parts of the helicopter were examined by analysts in Moscow it was discovered that the aircraft's designations did not match those of the presidential chopper.