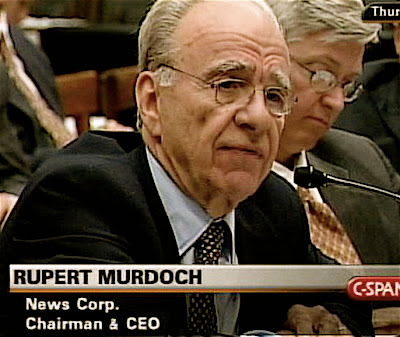 Stephen Glover on The Press
http://news.independent.co.uk/media/article2876791.ece

Did this minister's decision create the best or the worst of Times?
20 August 2007

One of the obituaries of John Biffen, the former Tory minister who died last week, dwelt on the most significant event in his political career by far. This was his decision in 1981 not to refer Rupert Murdoch's purchase of The Times and Sunday Times to the Monopolies and Mergers Commission.

Oddly, The Daily Telegraph obit, relegated beneath that of the American socialite Brooke Astor, did not mention this controversy at all.

The fascinating question is whether John Biffen, with Margaret Thatcher breathing down his neck, bent the rules so as to allow Mr Murdoch to buy the titles. His acquisition of them was a momentous development not only in the history of the British press but also of British culture and society. There were several knock-on effects, of which the launch of The Independent in 1986 was possibly one.

The pre-Murdoch Times was in a class of its own, occupying the same role in Britain as Le Monde still does in France, The New York Times in America or the Frankfurter Allgemeine in Germany. It was the Establishment newspaper: high-minded, widely trusted and serious. Of course, it had already partly adapted to the modern age, for example by putting news on the front in 1966, but it remained unapologetically elitist – the "top people's paper", in the words of its own advertising slogan.

Unfortunately, it was also losing a lot of money, and had been recently closed down by its management for 12 months in a fruitless stand-off with over-mighty Fleet Street trade unions. The Sunday Times, which had three times the circulation, was sometimes profitable despite the depredations of the unions. Though also upmarket, it was less Establishment than The Times, and had run a number of notable campaigns.

John Biffen had a difficult decision. Mr Murdoch, the only solid bidder, threatened to pull out if the deal was referred to the Monopolies and Mergers Commission. Whether he would have done so we shall never know. The print unions, though they did not like Mr Murdoch, who already owned The Sun and the News of the World, were prepared to do business with him.

Mr Biffen (the life peerage came later) was Secretary of State for Trade, and at that time a loyal Thatcherite. He decided not to refer the purchase, citing a clause in the Fair Trading Act that exempted uneconomic businesses from referral. His critics argued that The Sunday Times was profitable. There was a terrific hullabaloo since Mr Murdoch was abominated by the left, and more widely regarded as a tabloid barbarian.

John Biffen always maintained that he was moved solely out of concern for The Times and Sunday Times, which were said to be threatened with closure if the deal did not go through. By way of compensation for not referring the proposed purchase, he secured eight conditions from Mr Murdoch that were supposed to preserve editorial independence. These "guarantees" have not always been honoured. Even more significant, I would argue, has been the dumbing down of The Times.

Was John Biffen leant on? According to the right-wing columnist Woodrow Wyatt, a friend of Margaret Thatcher and Mr Murdoch, he was. In his posthumously published diaries, Lord Wyatt took credit for there being no referral. "I stopped that through Margaret", he wrote. He also suggested that the Monopolies Commission would "have almost certainly have blocked" the bid. Lord Wyatt was admittedly not a man to hide his light under a bushel, but he was influential. There is also no doubt that it was in the interests of Margaret Thatcher, then unpopular in both her party and the country, that the supportive Mr Murdoch should acquire these two influential titles.

It is difficult to believe, had Mr Murdoch been blocked, that no one else would have stepped forward to save the papers. Vere Rothermere, owner of the Daily Mail, had expressed an interest. What is undeniable is that his acquisition of The Sunday Times and The Times made Mr Murdoch much more powerful, and that he deployed this power in Margaret Thatcher's favour, and later Tony Blair's. Conceivably, the "Wapping revolution" of 1986 – when Mr Murdoch crushed the print unions and liberated the rest of Fleet Street – would not have happened if he had remained proprietor of only The Sun and the News of the World.

Above all, he transformed The Times. It is no longer "the top people's paper". Some people say its transformation had a kind of cultural inevitability. I disagree. Elitist publications nurtured by their proprietors have survived, and sometimes prospered, in other countries. The Times did not have to plunge downmarket – Rupert Murdoch just wanted it that way. He created a space that The Independent was partly intended to fill, though it might well have been launched in any event. Later, by slashing the cover price of The Times and moving it further downmarket, he put pressure on The Independent and other quality titles.

Even I would not pretend that Mr Murdoch's acquisition of The Times has had entirely bad consequences. It has been a mixed bag. John Biffen's was a momentous decision, though, and on the whole I wish he had not made it.

A modest legend, at home on a sinking ship

Bill Deedes, who died last Friday, gave me my first job, which was on the Daily Telegraph. I had never met a newspaper editor, let alone one who had been a Tory Cabinet Minister, and I was amazed by how self-deprecating, almost shy, he seemed.

Many people have remarked on Bill's modesty. Where did it come from? Probably he was born with it, but his background and personal experience conspired to deepen it. I think Bill accepted from an early age that what was precious was often easily lost.

Born into an old Kent county family, he missed the chance of going to university because his father lost his fortune and his house, and at the age of 18 Bill joined the Morning Post. Six years later, in 1937, that paper closed and was swallowed up by the Daily Telegraph.

One might have thought the war, which, after all, we won, and at the end of which Bill won an MC, would have undone his expectations of loss. But Bill remembered his dead friends and the slaughter, and never bragged about his experience.

Afterwards he became a Tory MP, a junior minister, and briefly a Cabinet minister. He observed the breathtaking collapse of British power. Appointed Minister Without Portfolio by Harold Macmillan, he remarked that "a sinking ship is my spiritual home". This is what he found at the Daily Telegraph, where he was appointed editor in 1974 – a once dynamic newspaper grown moribund, undermined by rapacious unions, and undefended by a weak management.

Bill survived all these setbacks. For him life was being a cork on a tumultuous sea. He craved neither power, nor money, nor earthly reward. Probably his professional life was at its most fulfilling in his final years, when he could practise what he loved most and did best: being a writer.
Posted by Alex Constantine at 11:30 PM